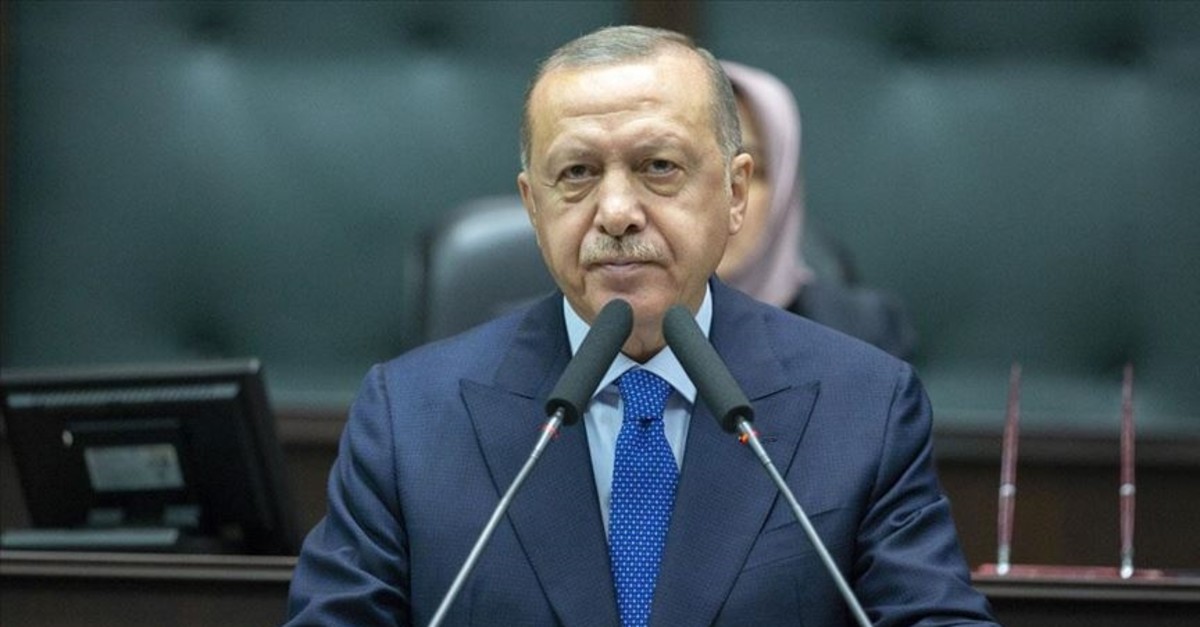 Turkey is not fighting against Syrians and will not sit at the negotiating table with terrorists, despite efforts by some countries to act as mediators, President Recep Tayyip Erdoğan said Wednesday.

"Turkey is not fighting against Syrians, it is fighting with Syrians against oppressors," Erdoğan told a group meeting of the Justice and Development Party (AK Party) in Ankara.

Rejecting offers to mediate in the conflict, the president said, "The Republic of Turkey never in its history sat down at the table with terrorist groups [referring to the PKK terrorist group's Syrian affiliate People's Protection Units (YPG)]. We are not looking for a mediator for that."

Instead, he laid down a red line, saying, "By tonight, all terrorists must lay down their arms, destroy their traps, and leave the safe zone we determined."

The Arab League has not provided any support to the Syrians affected by the conflict or accepted any of them as refugees, Erdoğan said.

The president criticized the Arab League for its indifference to the Syrian crisis and for wrongfully criticizing Turkey's ongoing anti-terror operation in northeastern Syria.

He continued by saying that Turkey will not change its mind about the operation, noting that western leaders did not expect the operation to be so successful in such a short time.

"A few western leaders have been calling us on a daily basis to urge us to stop Operation Peace Spring," he said.

"But no one (from western countries, Arab League) called to extend condolences for our 20 citizens who were killed and 170 who were wounded (by YPG cross-border attacks)," Erdoğan said, adding that they cannot be trusted.

Erdoğan highlighted that Turkey has never in its history massacred civilians and never will, adding: "Our religion and culture would never allow it."

"In fact it is the history of those who accuse us of committing massacres that are full of such massacres," Erdoğan said.

"If you want to see civilians being persecuted, look at Afghanistan, Myanmar, Upper Karabakh in the Caucasus and Bosnia in the Balkans," Erdoğan said.

"If you want to see civilian massacres, look at Cyprus before Turkey's intervention, look at Palestine just under your nose, where the Muslims are deliberately killed in the streets," he added.

On the island of Cyprus, an attempted coup and violence against the island's Turkish population led to Turkey's 1974 intervention as a guarantor state, and later the foundation of the Turkish Republic of Northern Cyprus.

With regard to the YPG's claims that Turkish troops in Syria are targeting civilians, Erdoğan said the Turkish military has not even responded to the shots fired by snipers from a church used by YPG terrorists in northeastern Syria because it is a house of worship.