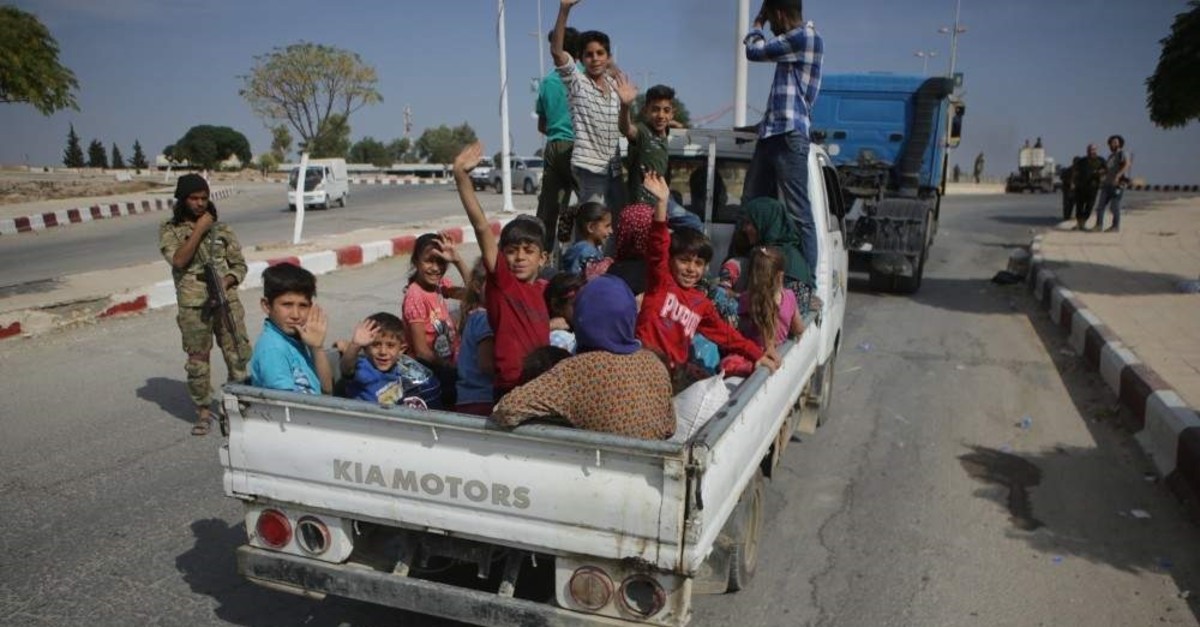 Tal Abyad has been liberated from YPG terrorists, and a temporary civilian council was formed as daily life backs to normal

Commanders of the Syrian National Army (SNA) agreed with tribal representatives in the town of Tal Abyad in northern Syria to form a temporary civilian council to administrate the Syrian town.

Adjacent to the Turkish border, the district center of Tal Abyad was cleared of the PKK terrorist group and its Syrian affiliate the People’s Protection Units (YPG) on Sunday as part of Turkey's Operation Peace Spring, which aims to clear terrorist elements east of the Euphrates in Syria.

The operation was launched on Oct. 9 in order to secure Turkey’s borders, aid the safe return of Syrian refugees and ensure Syria’s territorial integrity.

Representatives in the meeting late on Thursday discussed the formation of a temporary local council composed of members representing all residents of Tal Abyad, which had been occupied by the YPG for more than four years.

The SNA, meanwhile, will remain in control of the town until the local council is formed.

An SNA commander, Yusuf Abbud, told Anadolu Agency (AA) that they have been working on bringing all services back to the town.

"We had the bakeries working on the second day after taking the town. Hospitals continued their services where they left off. Now, we are preparing to establish a local council," he said. "We promise our people that everything will be better.”Life back to normal in Tal Abyad

As terrorists were cleared from the region, daily life has been quickly normalizing in Tal Abyad.

Images from the town show open shops, from bakeries and grocery stores to restaurants and clothing and shoe stores with women and children out on the streets.

Civilians are continuing to return to the town from nearby relatively safe areas they fled to due to recent clashes with YPG and PKK terrorists.

One of the returning citizens spoke to AA, expressing his joy that the town was freed from terrorists.

"They showed us hell. They were not allowing our vehicles to go through and we had to pay 200 Syrian pounds for passage," the civilian said.

"Their racism was above the limit," he said adding, "We [Arabs] do not want racism against Kurds."

Previously, about 50,000 Arab and Turkmen civilians were displaced from Tal Abyad as a result of the YPG’s oppression and terror campaign.
According to local sources, around 2 million civilians were forced to migrate from east of the Euphrates River in general while 250,000 Kurds in northern Syria sought refuge in Iraq and Turkey.
YPG terrorists set fire to civilian homes in Tal Abyad

Some of the civilians who had temporarily fled their homes for their safety found their houses burned after returning.

AA correspondents in the city recorded images of homes being torched by the YPG. Photos show that a large number of houses have become uninhabitable with everything indoors turned to ashes.

A mother from Tal Abyad, whose house was set on fire by terrorists, told AA: "I am an old woman. I have three daughters. We have nobody [to take care of us] but God."

"We had left our home and came back to find it like this. May Allah help us. We have nothing to sleep on. Our clothes are burned. They burned everything," she said.

Her daughter also said, “the PKK burnt out our home.”

“We left the district and when we came back we found our home burnt. We have nothing to sit on in our house. We borrowed things from our neighbors," the young woman added.
Ensuring security in Ras al-Ayn

Meanwhile, Turkish troops carrying out the operation with the support of the SNA continue their sweep to ensure security in Ras al-Ayn and its surroundings as soon as possible.

Turkish forces found tunnels where YPG terrorists took shelter during the clashes in the region. The troops are clearing the tunnels and residential areas of explosives to ensure the safety of the civilians.

This network of tunnels dug by the terrorists connected several houses in the district. Meanwhile, similar sweeps are being done to clear any land mines planted by the YPG in the region.

On Monday, Ras al-Ayn and Tal Abyad were announced "under control" by Defense Minister Hulusi Akar. In Jarablus yesterday, local people organized a demonstration to demand that Manbij be liberated from the YPG terrorists and Syrian regime forces.