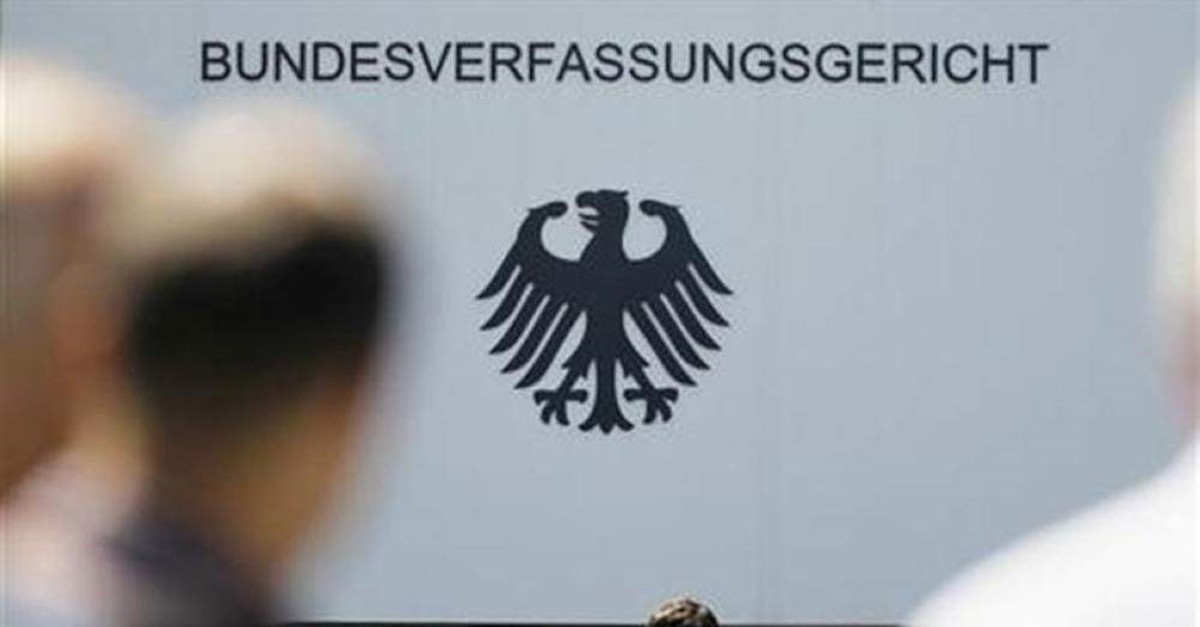 Journalists wait in front of the German Constitutional Court during the hearing on the European Stability Mechanism (ESM) and the fiscal pact in Karlsruhe July 10, 2012. (REUTERS Photo)
by Daily Sabah Oct 19, 2019 2:14 pm

The Federal Constitutional Court in Germany dismissed an application that claimed the Federal Government and the Bundestag (Parliament) violated German constitutional rights by deploying troops to Syria and Iraq to prevent and suppress terrorist acts by Daesh, ruling that it did not constitute an infringement and was borne out of its right to "collective self-defense".
The ruling precedes a Turkish-U.S. agreement to halt Turkey’s newest operation against terrorists in northeastern Syria. It also invokes hypocrisy as Turkey has been subjected to many criticisms and condemnations since it launched Operation Peace Spring, which is solely targeting terrorists along its borders.
The application that was rejected by Germany's top court was submitted by Die Linke (the Left Party), who had asserted that the deployment of German troops violated Section 2 of both Article 24 (Transfer of sovereign powers – System of collective security) and 59 (International representation of the Federation) of the Basic Law for the Federal Republic of Germany.
In a ruling dated Sept. 17, the court rejected Die Linke's application, stating that the applicant failed to sufficiently substantiate a violation of a right. The court ruled that the deployment of soldiers and the country’s involvement in military operations in Syria was authorized under the right to collective self-defense under the United Nation (U.N.) Charter’s Article 51, as the country has only exercised its right to self-defense which was targeting Daesh terrorists and not directed against Syria.
The same ruling rings true for Turkey, and in this case its three cross-border anti-terror operations. Ankara has reiterated many times that taking such measures for the safety of its people is protected by the United Nation (U.N.) Charter and its rights based on Article 51.
The court also stated that although Germany was not directly attacked by the terrorists at the time, they recognized the EU as a whole, a 'system', which brought the security needs of the bloc to a certain extent, and a 2007 agreement stated that border security was an issue that should be particularly protected within the system.

The German court initially approved the deployment of the German Armed Forces to Syria and Iraq on Aug. 4, 2015, following the Nov. 13 terrorist attack in the French capital Paris, which claimed the lives of 138 people, seven of which were the perpetrators.

Following the terrorist attacks, the U.N. Security Council condemned the attack, calling U.N. member states to take all necessary measures against Daesh which was defined as “a global and unprecedented threat to international peace and security”, in accordance with international law, the U.N. Charter and international human rights, refugee and humanitarian law.

Germany authorized the deployment of up to 1,200 soldiers to the region for a time period until Dec. 31, 2016 against the terror group, on condition that the country would not participate in direct action, within the scope of a global counter-terrorism operation called “Operation Counter Daesh,” with the International Coalition for Operation Inherent Resolve (OIR). The Federal court lastly ruled for the extension of German troops’ deployment in Syria until Oct. 31, 2019.
Turkey first targeted Daesh terrorists in Syria with Operation Euphrates Shield launched on Aug. 24, 2016 — its first cross-border operation against the rising threat. Daesh terrorists had claimed more than 250 lives in attacks across Turkey, one of which caused the deaths of 109 people in capital Ankara and injured more than 500 people when Turkey decided to take military action.

With Operation Euphrates Shield, Turkey managed to clear Syria’s Al-Bab and Jarabulus from Daesh terrorists. Subsequently, the country launched its second and third operations, Operation Olive Branch in January 2018 and Operation Peace Spring on Oct. 9, 2019, targeting the remaining Daesh terrorists in northeastern Syria and other terror elements such as the PKK terrorist group’s Syrian affiliate the People’s Protection Units (YPG), which constitutes a direct threat to Turkey’s border security. Since the operation began, YPG terrorists have killed 20 civilians in Turkish border towns with artillery and mortar attacks carried out from Syrian territory. The terrorists have also targeted the Turkish community living abroad in 26 separate attacks in several European cities.
Turkey has long decried the threat from terrorists east of the Euphrates in northern Syria, pledging military action to prevent the formation of a "terrorist corridor" there. The operations have made it possible for nearly 400,000 Syrians who fled the violence to return home.

Most recently on Thursday, Turkey agreed to pause its Operation Peace Spring for 120 hours to allow the withdrawal of terrorist YPG/PKK forces from the planned safe zone area.