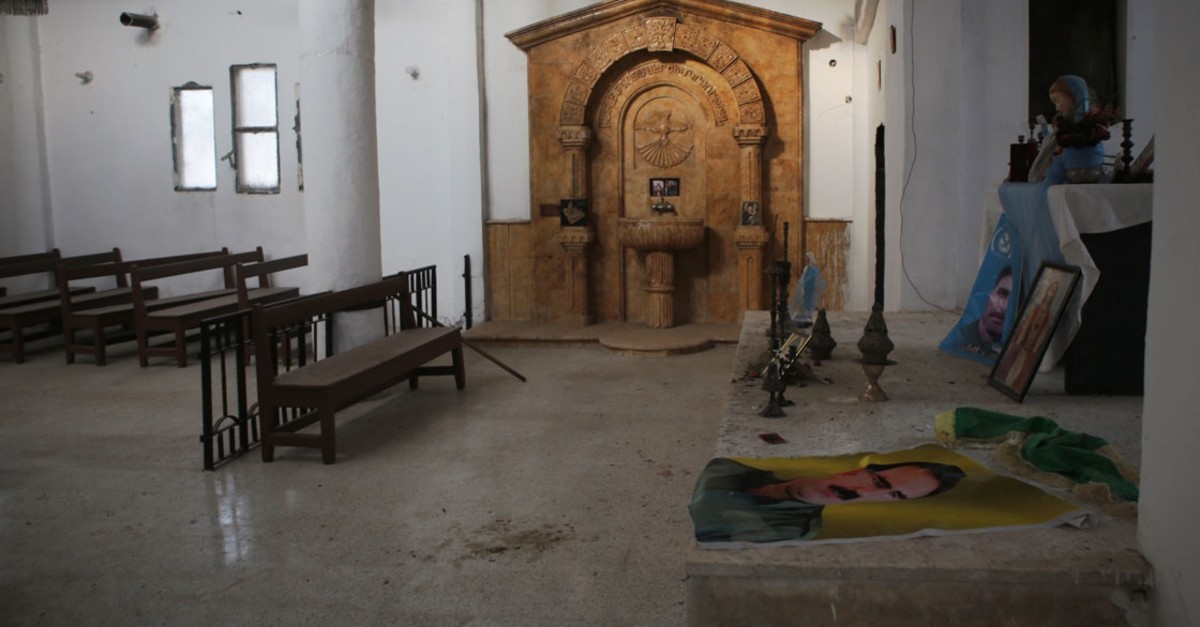 |The pulpit used by the pastor decorated with posters of the PKK leader Abdullah u00d6calan (AA Photo)
by Daily Sabah Oct 19, 2019 7:31 pm

The Turkish military and the Syrian National Army (SNA) freed the town across the Turkish border on Oct. 13, during the crossborder operation, which aims to clear terrorist elements east of the Euphrates in Syria.

The pulpit used by the pastor for his sermons was decorated with posters of the PKK leader Abdullah Öcalan, placed right under crosses and other religious signs. The pulpit, known in Armenian as "horan," is seen as a sacred place only used by the pastor of the church.

The church was put under the protection of the Syrian National Army (SNA) following the town's liberation. "When we entered the town center we didn't want to go near the church as we didn't want it to be harmed during the fighting," SNA Commander Ebu Abdo told Anadolu Agency. He urged the Christian and Armenian "brothers and sisters" to return to Tal Abyad.

"They can come to their church and hold their religious services," he said.

The YPG/PKK terrorists had used civilian houses and places of worship to carry out attacks against the Turkish operation. The terror group especially chose minarets as positions for their snipers.

The Operation Peace Spring was launched on Oct. 9 in order to secure Turkey's borders, aid the safe return of Syrian refugees and ensure Syria's territorial integrity. The operation, conducted in line with the country's right to self-defense borne out of international law and U.N. Security Council resolutions, aims to establish a terror-free safe zone for Syrians return in the area east of the Euphrates River controlled by the U.S.-backed Syrian Democratic Forces (SDF), which is dominated by YPG terrorists.