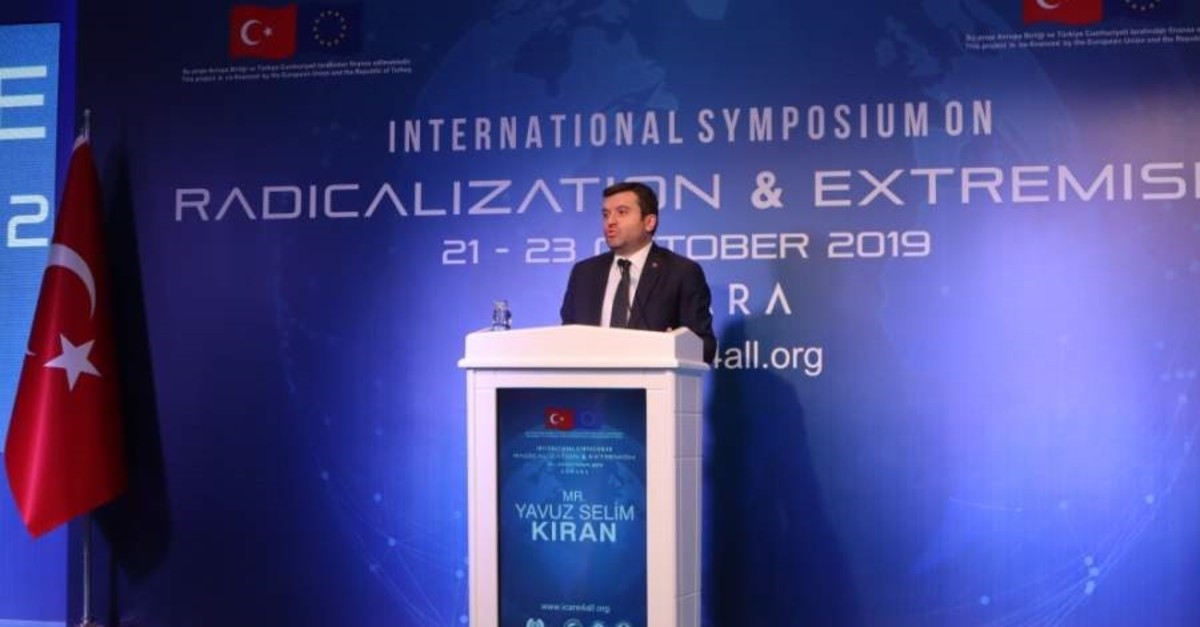 IMG_2835
by Oct 21, 2019 6:11 pm
Radicalization and extremism, though seemingly new concepts, have deep roots in history and have become the most significant threats to be tackled universally today. As the most active actor on this issue, Turkey continues to request the support of the international community to prevent radicalization in the first place and has called for the repatriation of foreign terrorist fighters (FTF).
“Despite seeming new, we as Turkey have encountered radicalization since the 1980s with the fight against the PKK. Maybe if we had recognized the threat earlier, we would have prevented the problem from becoming so complicated,” stated Deputy Foreign Minister Yavuz Selim Kıran yesterday during a symposium, continuing that Turkey’s allies do not take responsibility for the FTF and even object to Turkey’s struggle against terrorism.
Radicalization has its roots in various areas. One of the most important reasons is political, especially the military intervention of other countries in the Middle East, leaving people frustrated and creating radicalism. On the other side, there are also individual causes as well as educational, economic and social aspects. Stressing that radicalization does not happen overnight but is rather a process, Ufuk Ayhan of the National Police Academy explained that radicalization can be handled in four contexts: religious radicalization, ethnic radicalization, cultist radicalization, such as the Gülenist Terror Group (FETÖ), and ideological radicalization. “People are distanced from their values and terrorist groups impose their own symbols. Family figures are replaced with terrorist actors,” Ayhan stated, adding that the roots of radicalization must be identified correctly with an action plan including nongovernmental organizations, education and all relevant institutions.
The popular support for the PKK is eroding, and the terrorist group is having difficulty filling its ranks and therefore targets European citizens where growing polarization and xenophobia are on the rise, Aylin Sekizkök of the Foreign Ministry stated.
Turkey is the country that has suffered most from FTF. Daesh conducted 14 major attacks against Turkey, where 304 people were killed and 1,338 were wounded. In the face of these threats, Turkey has introduced some preventive measures, such as entry bans against those that risk posing a threat to public order and security. Analysis units were established in 2004 in 30 provinces to hinder people crossing into conflict zones, administrative detention, road controls and search points. In this context, 7,625 FTF of 102 countries were removed from Turkey, according to Ramazan Seçilmiş of the Directorate General of Migration.
“There are around 285,000 prisoners in Turkey, which is proportionally successful compared to Europe. Around 40,000 are terrorism prisoners comprised of groups such as FETÖ and the PKK. Furthermore, there are nearly 1,100 from Daesh, half of which come from nations other than Turkey,” stated Hüseyin Şık of the Justice General Directorate of Prisons and Detention Houses.
Speaking to Daily Sabah, Sekizkök explained further: “There is no single solution to the problem; therefore, it has to be tackled from all aspects and that is what we are trying to do in Turkey. We have developed our institutions in many aspects and taken an evolutionary approach. Besides education, the ministry of family, labor and social services and nongovernmental organizations are carrying out important works on the field. The muhtars [local headman] play also an important role in the local level.”
When the backgrounds and nationalities of the FTF are analyzed, no clear connection can be found between them except for social media. In this aspect, it is vital to take preventative measures in online platforms and identify potential threats. Yet, the internet we use and see constitutes only 4% of the total, whereas the rest is identified as the dark web where most of the illegal actions take place. Terrorist organizations' main aim on this platform is data mining, establishing networks, recruiting militants, planning, coordination and gathering donations.
Mentioning the causes of radicalism, Middle East Strategic Research Center (ORSAM) Chair professor Ahmet Uysal told Daily Sabah: “I think there are two main causes: economic and ideological ones. In Turkey, we have a higher tolerance for foreigners because of our culture and Ottoman history. Yet, groups that were not exposed to foreign groups, such as Christians or Jews, tend to be more radical, which can be seen in the south.”
Last Update: Dec 20, 2019 1:09 am
RELATED TOPICS