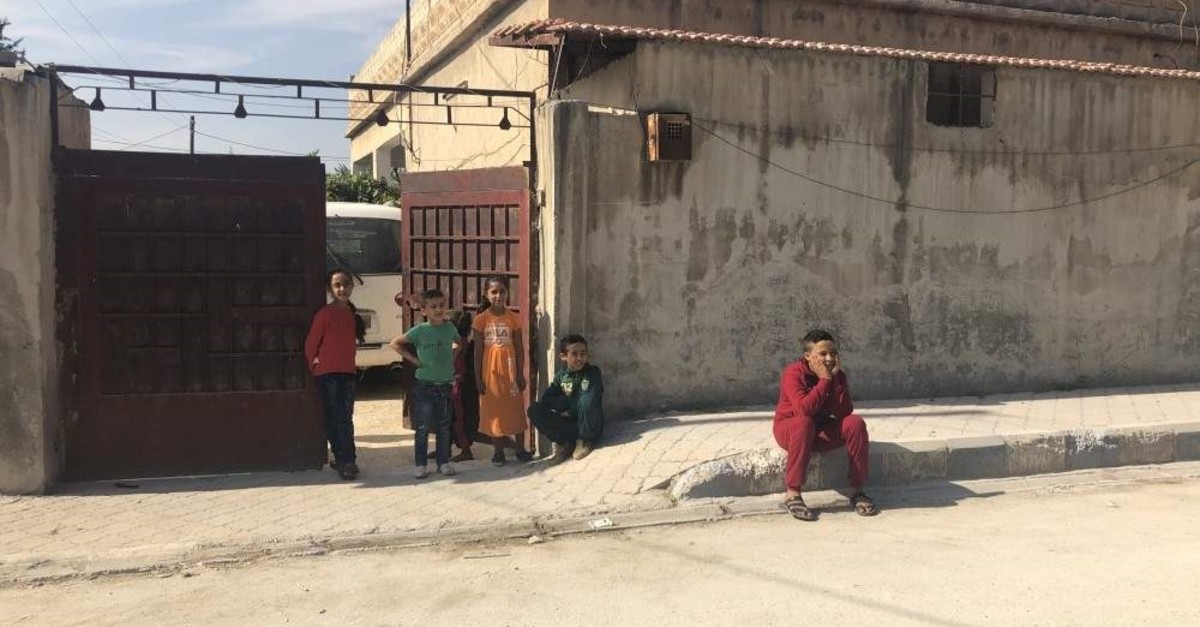 10 days since liberation, Tal Abyad is still suffering from YPG terrorists' leftovers while the Turkish military is determined to restore peace in the region as soon as possible

Once suffering under the yoke of one terrorist group after another, northeastern Syria's Tal Abyad has finally had a taste of freedom after the Turkish military entered the region 10 days ago.
Determined to clear all the sorrowful memories of the past, the Turkish soldiers now have one top priority in the region that is providing security to the civilians.

You're welcomed by a dusty road when you first enter Tal Abyad from Turkey’s Akçakale district in the southeastern province of Şanlıurfa. Though the road seems mostly empty and peaceful, there are bullets and cartridge cases all over the place, reminding you constantly of the turbulent days that ended just weeks ago. Although there are no visible threats, the region is still struggling with hidden perils left behind by the PKK’s Syrian wing, the People’s Protection Units (YPG).
Mines or improvised explosive devices (IEDs) that were planted all around the region, especially near civilian settlements, are one of the most common hidden threats that has created a huge challenge for the Turkish military when it comes to providing locals security.

It is quite usual for both the military personnel and the locals to come across new mines each they, despite the fact there is constant work underway to clear the area. Shortly after our vehicle entered the province, it was revealed that mines have been found on our planned path. Immediately, we had to stop moving forward as the mines needed to be removed.

“We have already cleared this area before. Still, there are new IEDs found every day. Locals let us know whenever a new one is being revealed,” said a military commander, just before the removal process has started. When asked how the civilians are being saved from such hidden weapons, the commander answered, “We have placed sandbags around the civilian houses so that they can be protected.”

Following the removal of the IED, which was accompanied by a huge explosion, a massive wave of sand blew through the air, scattering along those sandbags that were in place to save people.

“Even yesterday a group of our soldiers has stepped over a planted mine. You never know what would happen,” said the commander, regarding the difficulties of the region. Still, the roads are relatively safer than the rural parts as they are easier to clean, which is why civilians are constantly being urged to walk in the middle of the roads.

On Oct. 13, the Turkish military and Syrian National Army (SNA) forces took control of the western part and a central district of Syria's Tal Abyad, a region often referred to as the YPG's “Achilles Heel," as Turkey's Operation Peace Spring entered its fifth day. Having a majority Arab population, alongside with Kurdish and Turkmens inhabitants, Tal Abyad was first captured by the Syrian opposition back in 2012, only to be captured by the Daesh terrorists two years later. Yet, in 2015, YPG terrorists came along and control of the province. After changing hands three times in the last eight years, suffering from various demographic shifts, migrations and brutalities, the province is now looking for a stable, peaceful order.

“Turkmens, Kurds, Arab we were all living here peacefully until the terrorists came along,” said a Syrian National Army (SNA) soldier, while discussing the current situation of their hometown with a civilian Arab woman, remembering the peaceful past.

After the YPG captured the province from the Daesh, even the places of worship were taken from the civilians after being turned into military bases for the terrorist group. A nearly 100-year-old Orthodox church in central Tal Abyad is one of the greatest examples of restriction over religious practices by the YPG. As one of the main houses of worship for the region, the church had turned into a military base and a temporary prison for the terrorist group, a mission that is far away from its building purposes. When you enter into the church, you are seeing an ordinary, smaller church scene where there are pictures and small statues of the Virgin Mary and Jesus with a small fountain on the left-side wall. However, when you go to the back of the building, an opposite scene welcomes you, with small, dark cells, covered with cobwebs.

“We believe that these cells were used as temporary prisons for the civilians who committed ‘crimes,’” said an SNA soldier named Mohammed, adding that, before they came, all the cells were being emptied already.

Soldiers explained that during Operation Peace Spring, the YPG fired shots from this church and yet the Turkish side did not reciprocate with a concern of damaging a historic house of worship.

At that time, the world was waiting to see Turkey's rules of engagement on the matter, and learn whether such places, including hospitals, etc., will be considered "red lines," as various claims were being circulated all around the media outlets stating that the country was committing “war crimes.” As a response, Turkish soldiers have taken necessary precautions to ensure the safety of civilians and civilian compounds, as the defense ministry highlighted that they are paying utmost attention to make sure civilians are not harmed in the operation.

Another SNA soldier, Abu Jouneyd said the church has not being used actively for years due to YPG presence. “Only a few servants were present there. Now, as they left the region, the church is open to worship once again,” he said.

Near the church, there was also a mosque, which was unusable because of the dirt and damage both inside and outside although not being used as a military base. Yet, when we reach there, we saw an old man, finishing his prayers inside. “When SNA came to the province, one of the first jobs of theirs was to clear this mosque, making it suitable for performing prayers,” said a Turkish soldier as we were observing the green tablatures of the building.