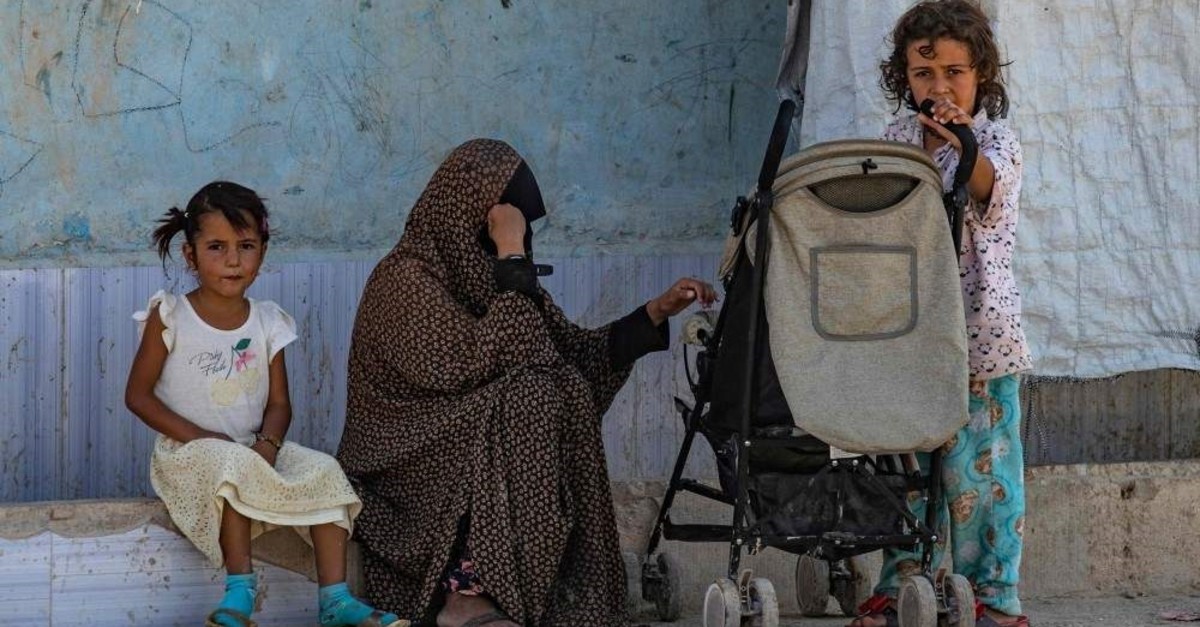 A woman sits with children at the YPG-run al-Hol camp for the displaced where families of Daesh foreign fighters are held, in the al-Hasakah governorate in northeastern Syria, on Oct. 17, 2019. (AFP Photo)
by Daily Sabah with AA Oct 24, 2019 4:24 pm

Children of refugees or arrested Daesh members in the al-Hol camp in Syria were trained by PKK-linked terrorists for armed conflicts and given weapons by the terrorist group, and were even put in the front lines of fire against the Turkish-backed Syrian opposition, a former detainee who escaped the camp has revealed.
The Uzbek woman, who was identified only by her initials as D.S., said that those children were forcefully transferred to Turkey’s Operation Peace Spring area to be used as civilian shields against the Turkish Armed Forces (TSK)-backed Syrian National Army (SNA).
The woman lived in Dubai, Denmark and Istanbul before joining the Daesh terrorist group with her husband S.S. She was taken to the al-Hol camp in Syria’s Hasakah by the PKK terrorist organization’s Syrian affiliate the People’s Protection Units ( YPG) after her husband was killed in airstrikes in Deir el-Zour.
The former Daesh member then escaped the camp in October, and was detained by Turkish security forces while trying to illegally cross the border after giving money to a smuggler.
The Daesh-linked detainee told Anadolu Agency that many Daesh members and their families including over 20,000 women and children from Syria, Iraq, Chechnya, Dagestan, Kyrgyzstan, Uzbekistan, Azerbaijan, Tunisia, Algeria, Albania, Kazakhstan and several other European countries like France were living there during her time at the camp. She added that some of the detainees were taken back by their native countries.
The woman said that the terrorists were giving arms training to children as young as 10 years old, and some were even taken to the frontlines of fire against the TSK-backed SNA.
Stating that those who were sick or wounded were not taken care of, the woman said that YPG members were trying to confiscate detainees’ valuable belongings and killed those who tried to fight back.
Many women and children were killed either this way or died of diseases, she noted.
Previous reports revealed that the YPG had killed refugee women protesting the terrorists' policy of separating mothers from their children at the camp.
The camp is a holding place for civilians who escaped the conflict between the Daesh terrorist group in Deir el-Zour, along with the families of former Daesh members who surrendered and captured terrorists. Most of the civilians were forcefully brought to the camp by the YPG in April 2017, according to the reports.
Several human rights organizations and the United Nations have repeatedly warned that conditions in the al-Hol camp are worsening each day, and have demanded access to the centers where the families of former Daesh members are being held.
According to the U.N., there are currently some 73,000 people held in the camp, 92% of whom are women and children, and 15% of whom are foreign nationals.
Turkey launched Operation Peace Spring, the third in a series of cross-border anti-terror operations in northern Syria targeting terrorists affiliated with Daesh and the PKK's Syrian offshoot the YPG, on Oct. 9. The operation was paused on Oct. 17 after a deal between Ankara and Washington to give the YPG five days to withdraw from the proposed safe zone area, a period which ended Tuesday night. The same day Ankara and Moscow reached a new deal that foresees Russian military police and Syrian border guards "facilitating the removal" of YPG terrorists and their weapons from within 30 kilometers (18 miles) of the border within 150 hours.