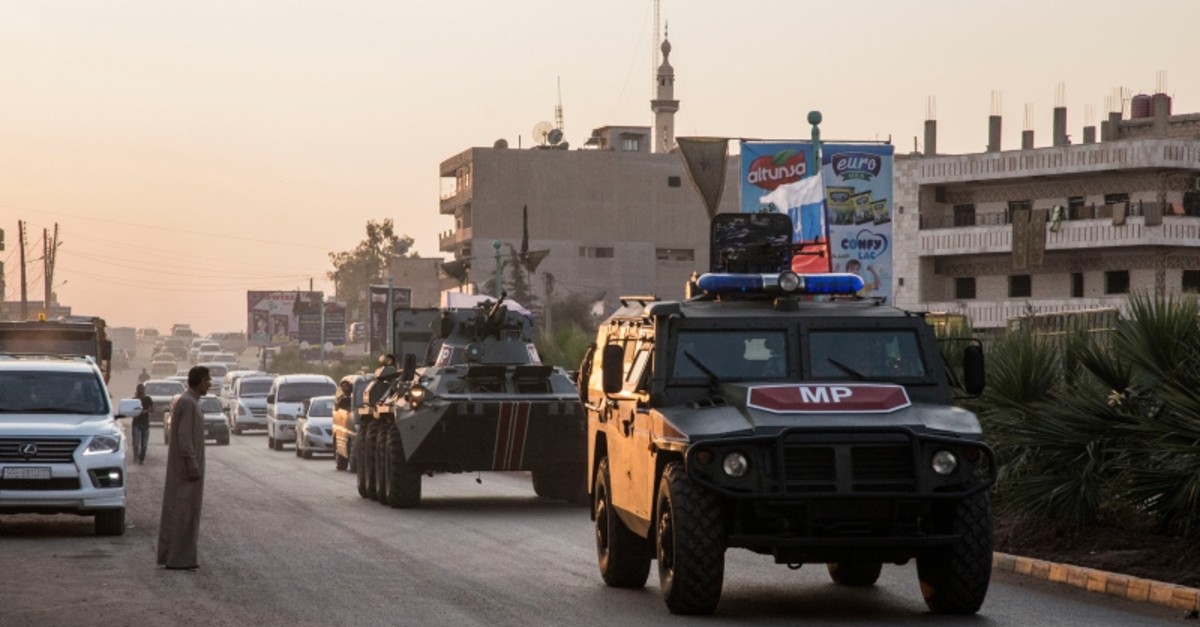 Russian military police carried out their first patrol in northern Syria on Wednesday under a deal between Ankara and Moscow that requires the PKK’s Syrian branch, the People’s Protection Units (YPG), to withdraw from a planned safe zone.

"In accordance with the memorandum of the deal that was signed between Turkey and Russia in Sochi on Oct. 22, today, Russian military police patrolled the designated route in northern Syria for the first time," Russia’s Defense Ministry said in a statement.

The operation, conducted in line with the country's right to self-defense borne out of international law and U.N. Security Council resolutions, aims to establish a terror-free safe zone for Syrians to return to the area east of the Euphrates controlled by U.S.-backed Syrian Democratic Forces (SDF), which is dominated by YPG terrorists.

Ankara agreed with Washington on Oct. 17 to pause its operation to allow YPG terrorists to withdraw from the planned zone.

On Tuesday, President Recep Tayyip Erdoğan and his Russian counterpart Vladimir Putin held a "historic" meeting in the Black Sea resort town of Sochi just hours before the pause was set to expire.

Ankara and Moscow reached a deal under which YPG terrorists will pull back 30 kilometers from Turkey’s border with northern Syria within 150 hours starting at noon on Oct. 23, and security forces from Turkey and Russia will conduct joint patrols there.

The Turkish Defense Ministry also made a statement yesterday saying Turkey continues to keep in touch with Russian authorities regarding the mechanisms that will be established as part of the safe zone in northeastern Syria as per the agreement signed between Moscow and Ankara.

"We continue to work with our Russian counterparts regarding the establishment and control of mechanisms to enforce the Sochi agreement," the ministry said.

The ministry continued by saying that the Turkish Armed Forces (TSK) have started to carry out humanitarian work by distributing bread to the residents of the Syrian city of Tal Abyad following the establishment of a bakery, while a mobile health clinic has been providing health services to the people.

The Turkish military liberated the city center of Tal Abyad from YPG terrorists on Oct. 13 within the scope of Turkey's Operation Peace Spring in northern Syria. Tal Abyad residents started returning to their homes on Oct. 15.

As part of the efforts to normalize life in the area, the TSK also continues to destroy underground tunnels used by the YPG terrorists in residential areas.

"So far 40 mines and 227 improvised explosive devices have been destroyed to facilitate the return of local residents," the Defense Ministry said.

In addition to the establishment of a safe zone near the Turkish border in Syria to eliminate the terror threat, the deal with Moscow also aims to facilitate the voluntary return of Syrian refugees to their homes. Some 140 villages and 10 district centers will be established within the 30 to 40-kilometer deep safe zone in northern Syria, housing 5,000 and 30,000 inhabitants each, respectively. The settlements will be provided with various facilities so that the people living there will be able to lead normal lives with every need met.

Members of the EP passed a resolution condemning the Turkish anti-terror operation in northern Syria and calling for sanctions.

“We absolutely reject the attitude of the European Parliament on Operation Peace Spring. We are not surprised by this decision taken by a parliament constantly hosting terrorists,” the ministry said in a statement.

Ankara reminded the parliamentarians that the operation was being conducted in line with the country's right to self-defense borne out of international law and U.N. Security Council resolutions.

“The legitimacy of this operation was confirmed by agreements [Turkey] made with the U.S. and Russia,” the statement said.

The ministry also said Turkey refuted or provided information to the international community and foreign counterparts on claims included in Thursday’s resolution.

“The EP, which despite all our explanations adopted a decision inconsistent with the facts, pressed on with its biased attitude toward Turkey lacking common sense,” the statement said.

“The decision shows that the EP cannot properly follow important developments in the regional and global arena, objectively evaluate causes and consequences, and develop sound and relevant strategies,” it added.

Ankara also slammed the European Parliament and the EU for “taking shortsighted decisions instead of expressing gratitude” to Turkey for the operation that aims to eliminate the terror threat, secure Syria’s territorial integrity, prevent more illegal migration and ensure the safe return of Syrian refugees to their homeland.

In another statement, ruling Justice and Development Party (AK Party) spokesman Ömer Çelik said yesterday that Turkey protects the borders of the European Union and hundreds of thousands of migrants would pile up at their borders if the country did not undertake the responsibility of millions of Syrian refugees.

"The Turkish military will not withdraw from northeastern Syria until the stability and safety of the region are ensured," Çelik told reporters at a news conference in Ankara.

Çelik was responding to criticism from some European countries regarding Turkey's anti-terror operation in Syria as he slammed their hypocritical stance on terrorists.

"Each country needs to accept their citizens who fought for Daesh in Syria," Çelik said.

Since 2016, Turkey's Euphrates Shield and Olive Branch operations in northwestern Syria have liberated the region from YPG and Daesh terrorists, making it possible for nearly 400,000 Syrians who fled the violence to return home.