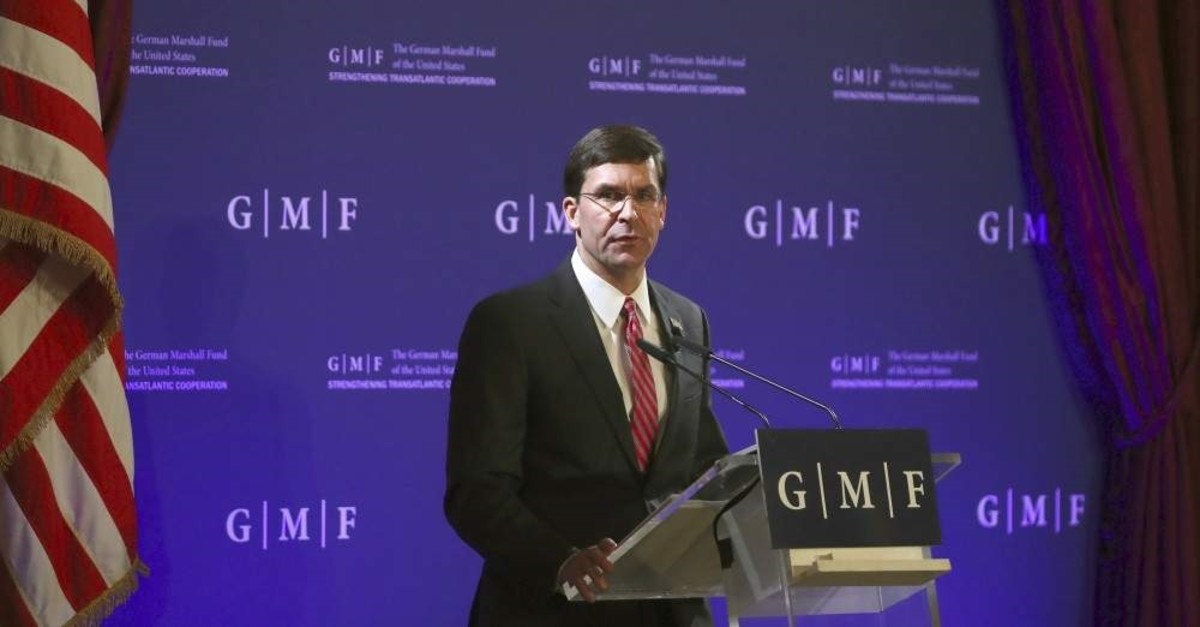 U.S. Secretary for Defense Mark Esper speaks during a panel discussion at the Concert Noble in Brussels, Belgium, 24 October 2019. (EPA Photo)
by Daily Sabah Oct 24, 2019 4:24 pm
The U.S.’ deal with the Syrian Democratic Forces (SDF) was only to defeat Daesh and Washington never promised to help the SDF establish an autonomous Kurdish state, Secretary of Defense Mike Esper said Thursday.
“Our partnership with the SDF, which was a very good one and still is a good one by the way, was about defeating ISIS. By March of 19, 2019, we clearly destroyed the physical caliphate of ISIS. Our commitment to the Kurds was not to help them establish an autonomous Kurdish state and defend them against Turkey. And that’s just the cold hard facts,” Esper said, using another acronym for the Daesh terrorist group.
Speaking at the German Marshall Fund, Esper said Turkish officials made it very clear they were determined to launch Operation Peace Spring as Ankara has always been uncomfortable with the U.S.’ partnership with SDF, which is dominated by the People’s Protection Units (YPG).
Esper acknowledged that "there has been some criticism" about the U.S. withdrawal but said nobody suggested a better alternative.
"The U.S. decision to withdraw less than 50 soldiers from the zone of attack was made after it was made very clear to us that President (Recep Tayyip) Erdoğan made the decision to come across the border," he said.
"I was not about to put less than 50 U.S. soldiers in between a 15,000-man-plus Turkish army preceded by Turkish militia and jeopardize the lives of those servicemen, nor was I about to start a fight with a NATO ally," he said.
The secretary said Turkey has put the U.S. in a “terrible situation”, and called the operation “unwarranted”.
Esper also said Ankara was “spinning closer into Russia’s orbit” and urged more effort to strengthen Washington’s partnership with Turkey.
Turkey launched Operation Peace Spring, the third in a series of cross-border anti-terror operations in northern Syria targeting terrorists affiliated with Daesh and the PKK's Syrian offshoot the People's Protection Units (YPG), on Oct. 9.
The operation, conducted in line with the country's right to self-defense borne out of international law and U.N. Security Council resolutions, aims to establish a terror-free safe zone for Syrians return in the area east of the Euphrates River controlled by the U.S.-backed Syrian Democratic Forces (SDF), which is dominated by YPG terrorists.
The PKK — listed as a terrorist organization by Turkey, the U.S. and the EU — has waged a terror campaign against Turkey for more than 30 years, resulting in the deaths of nearly 40,000 people, including women, children and infants.
Last week, Ankara agreed to pause the operation following high-level talks with the U.S. as Washington promised to ensure withdrawal of YPG terrorists from the Turkish-Syrian border. On Tuesday, Turkey and Russia reached an agreement to establish a terror-free safe zone near the Turkish border in Syria.