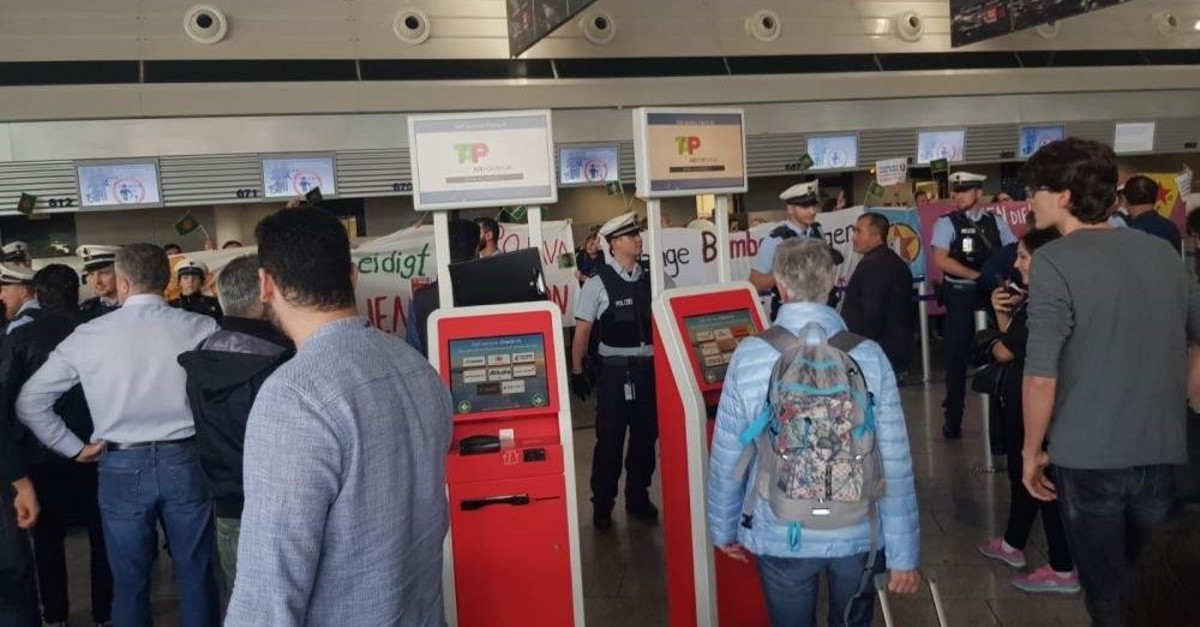 PHOTO-2019-10-25-15-30-23_4
by Daily Sabah Oct 27, 2019 8:00 am
As supporters of the PKK terror group and its Syrian branch, the People’s Protection Units (YPG), intensify their violent actions day by day in Germany, the government remains silent on the terror group’s activities in the country.
Since Turkey launched its cross-border, anti-terror Operation Peace Spring, PKK supporters have organized illegal demonstrations and targeted many shops, mosques and residential places belonging to the Turkish community.
In these violent attacks, 15 Turkish citizens were injured. The note Turkey issued to Germany called for German officials to take necessary measures to protect the Turkish community and organizations from PKK supporters’ actions.
On Friday, PKK supporters once again attacked Turkish citizens, this time at Frankfurt airport. Holding an illegal demonstration, PKK supporters targeted Turkish citizens who protested their demonstration.
This is not the first time Turkish civilians have been targeted by the PKK in Europe; whenever Turkey launches operations against terrorist groups, their supporters target innocent civilians across Europe by benefiting from the lack of measures by European governments.
During Turkey's two previous cross-border operations against terrorist groups, PKK supporters attacked the Turkish community across Europe.
Turkey has long criticized European authorities for tolerating PKK activities in the country and has pressured them to take stricter measures against the propaganda, recruitment and fundraising activities of the group.
The PKK, listed as a terrorist organization by Turkey, the U.S. and the EU, has waged a terror campaign against Turkey for more than 30 years and has been responsible for the deaths of nearly 40,000 people, including women and children.
According to reports released by German officials, the PKK and YPG have rapidly increased their violence in the country, especially focusing on young people to direct them into radicalism and violence.
According to official statistics, the crimes committed by members of the PKK or YPG increased by 80% this year compared to last year, numbering 1,873, with 305 of these crimes classified as violent acts.
As a United Nations report stated, the PKK has nearly 14,500 members in Germany.
Germany is one of the most strategic places for the terror group to spread propaganda, recruit members and collect funds.
Although the PKK’s operations to recruit members and send them to other countries for training and fighting are closely followed by German intelligence agencies, necessary measures or actions are very limited.
The U.N. report also said the terror group efficiently used the internet and social media sites to influence young people in Germany to join them.
It also stated that at least 250 people were sent to Syria and Iraq from Germany to fight, and some of them lost their lives in clashes.
Under the disguise of cultural activities, the PKK and YPG supporters organize events to spread anti-Turkey propaganda and present themselves as peaceful, democratic organizations.
PKK members in Germany act in a strict hierarchical structure, following the orders directly coming from PKK headquarters, the report explained.
Intelligence reports also revealed that the terror group collected more than $15 million in 2018 in fundraising events organized in Germany.
Also, illegal activities such as drug smuggling and money laundering helped the terrorist group earn more than $40 million in the country.
Despite its status as a designated international terrorist organization, the PKK has enjoyed relative freedom in European cities and has a particularly strong presence in Germany.
PKK supporters have been allowed to hold rallies, recruit militants and collect funds in Germany, which is home to some 5 million people of Turkish descent, including Kurds.
The PKK has been banned in Germany since 1993, but it is still active with nearly 14,500 followers among the country's Kurdish immigrant population.
Last Update: Dec 20, 2019 1:15 am
RELATED TOPICS