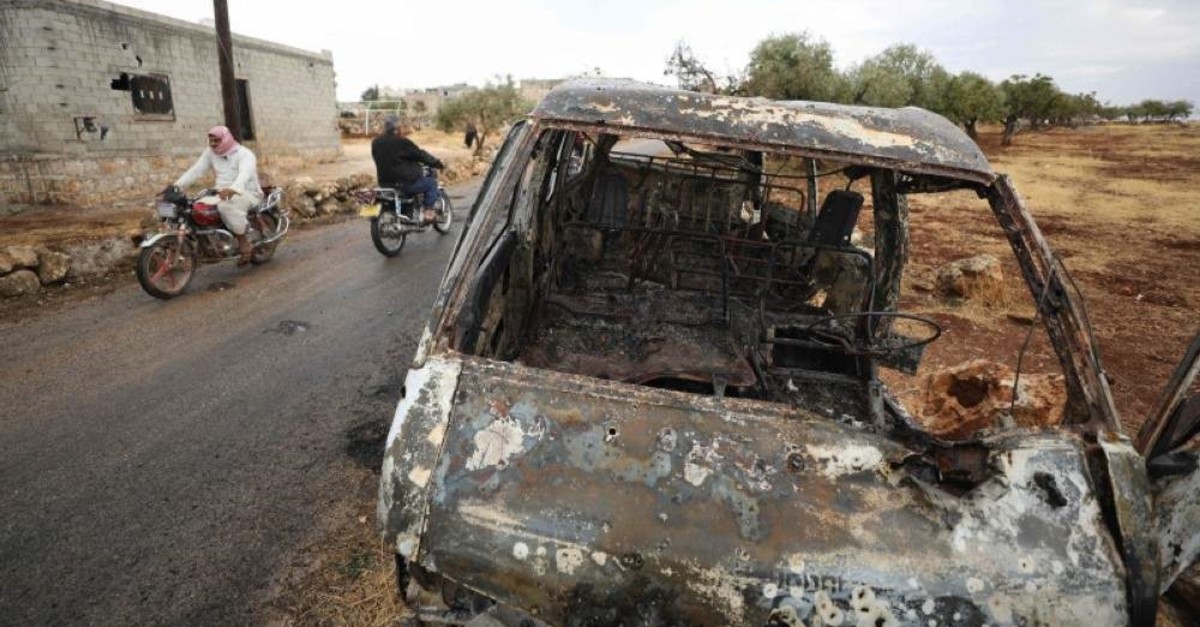 A picture taken on Oct. 28, 2019 shows Syrian bikers riding past a damaged car at the site of a suspected U.S.-led operation against Daesh chief Abu Bakr al-Baghdadi conducted the previous day (AFP Photo).
by daily sabah Oct 29, 2019 11:20 am
Turkish intelligence played a key role in the death of Daesh terrorist leader Abu Bakr al-Baghdadi by detaining and extraditing one of his aids to Iraq, who provided U.S. authorities with critical information for locating the vicious man.
Ismael al-Ethawi, a key aide to al-Baghdadi, was detained by Turkish police in the northwestern Sakarya province in an anti-terror operation on Feb. 8, 2018, and handed to Iraqi authorities.
He had reportedly entered Turkey through a PKK-linked People’s Protection Units (YPG) controlled area in Syria and was extradited to Iraq on Feb. 14 after being interrogated by Turkish intelligence.
The key aide to the Daesh leader was also interrogated by Iraqi intelligence and the CIA in Iraq, which enabled a series of critical operations targeting the terrorist group in Iraq and Syria, reports said.
He provided vital information to U.S. authorities to determine the locations where top Daesh figures would meet with al-Baghdadi.
He also provided the secret communication codes used by Daesh terrorists to access the group’s bank accounts and acted as a mediator between the group and local tribes.
Some 39 senior Daesh terrorists were killed in Syria’s Deir el-Zour through the information Ethawi provided.
“They gave us all the locations where they were meeting with al-Baghdadi inside Syria, and we decided to coordinate with the CIA to deploy more sources inside these areas,” an Iraqi official told Reuters, adding that they were then able to locate al-Baghdadi’s whereabouts in Idlib.
Considered by Iraqi intelligence to be one of al-Baghdadi’s top-five aides, Ethawi became a member of al-Qaida in 2006 and was imprisoned in 2008 for four years.
Baghdadi was killed in a U.S. military operation in Syria, officials announced on Oct. 27.
Turkey has been waging a critical war against the terrorist organization, which has killed over 300 people in the country.
Turkish security forces have been involved in a long-running campaign to thwart the Daesh threat. Some 2,000 people have been arrested and 7,000 others deported in operations against Daesh in Turkey, while around 70,000 people have been denied entry to Turkey over their suspected links to the terrorist group. Security forces have also foiled at least 10 attack plots. Figures show that some 18,500 suspects are currently being monitored for links to the terrorist organization after being identified at airports upon arrival.
Last Update: Dec 20, 2019 1:18 am
RELATED TOPICS