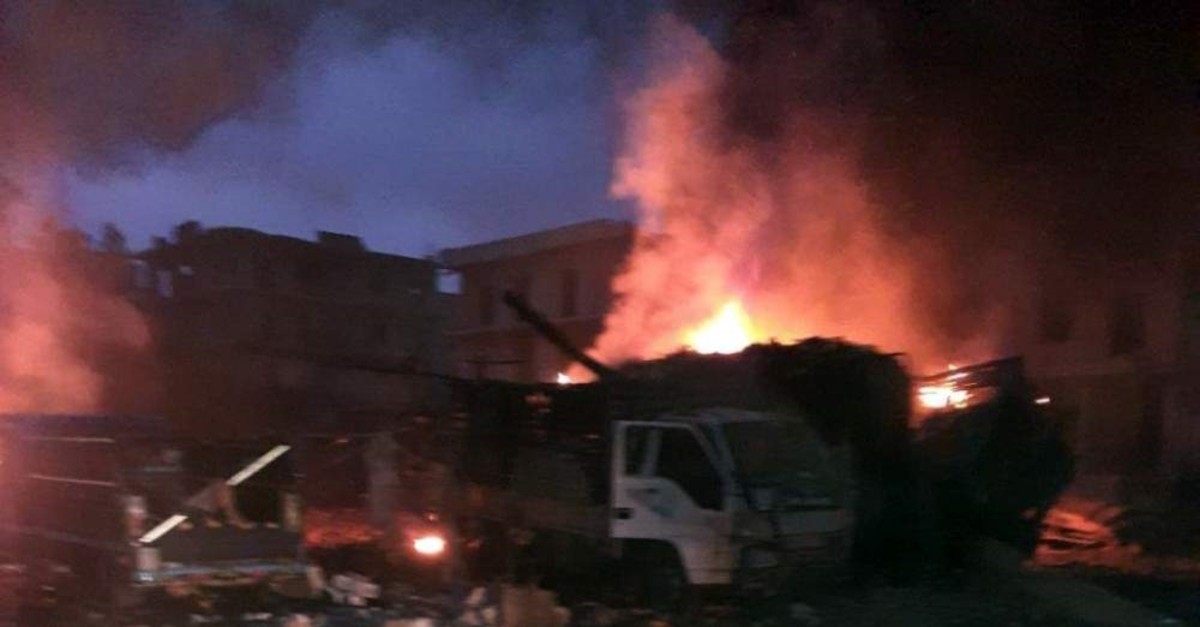 | IHA Photo
by Daily Sabah Oct 31, 2019 10:17 am
Eight civilians were killed and 14 others were injured in a suspected terrorist attack by the PKK-linked People’s Protection Units (YPG) in the northwestern Syrian city of Afrin near the Turkish border, reports said on Thursday.
The explosion was caused by a bomb-laden vehicle, which exploded in the city’s vegetable market at 7 a.m. local time, reports said.
The injured civilians, including two children, were immediately rushed to the hospital.
A fire also broke out at the market, reports added.
YPG terrorists occasionally carry out such attacks targeting civilians.
In January 2018, the Turkish military and Free Syrian Army (FSA) fighters launched Operation Olive Branch to clear Afrin of terrorist groups, liberating the town center on March 18, at the operation's 58th day.
Since 2016, Turkey's Euphrates Shield and Olive Branch operations in northwestern Syria have liberated the region from YPG and Daesh terrorists, making it possible for Syrians who fled the violence to return home.
Although no specific terrorist group was mentioned, the YPG terror group uses car bombs to attack civilians in Afrin.
Turkey launched Operation Peace Spring, the third in a series of cross-border anti-terror operations in northern Syria targeting terrorists affiliated with Daesh and the YPG, on October 9 at 4 p.m.
The operation, conducted in line with the country's right to self-defense borne out of international law and U.N. Security Council resolutions, aims to establish a terror-free safe zone for Syrians return in the area east of the Euphrates River controlled by the U.S.-backed Syrian Democratic Forces (SDF), which is dominated by YPG terrorists.
The PKK — listed as a terrorist organization by Turkey, the U.S. and the European Union — has waged a terror campaign against Turkey for more than 30 years, resulting in the deaths of nearly 40,000 people, including women, children and infants.
Turkey has long decried the threat from terrorists east of the Euphrates in northern Syria, pledging military action to prevent the formation of a "terrorist corridor" there.
Last Update: Dec 20, 2019 1:20 am
RELATED TOPICS