'Turkey's job in northern Syria not done yet' 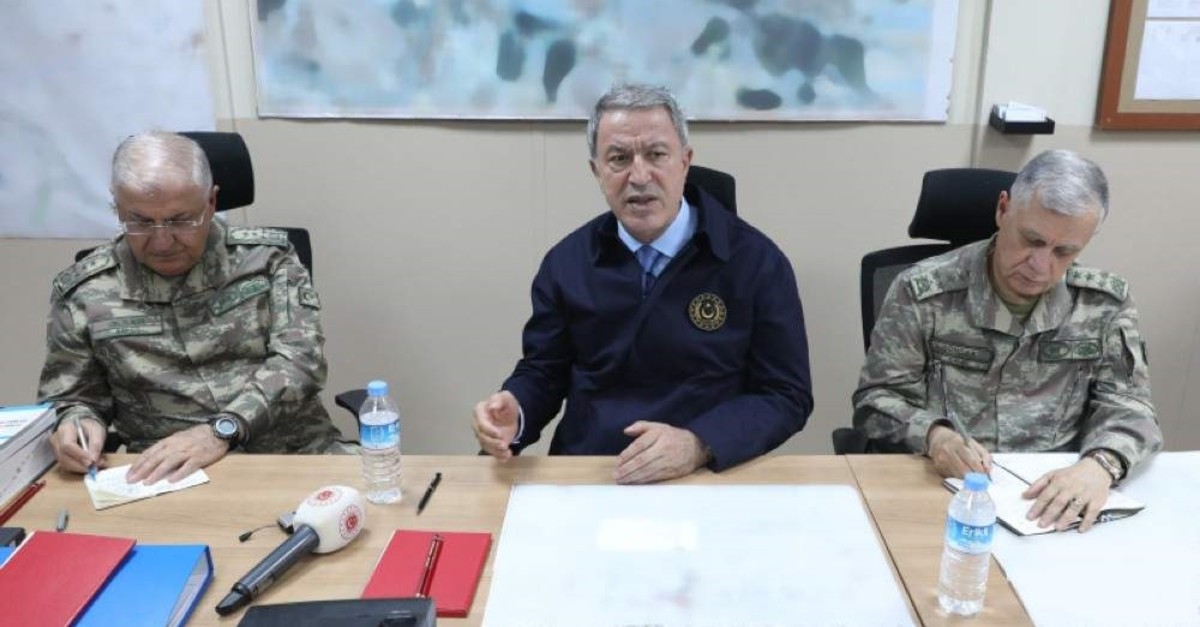 | IHA Photo
by Daily Sabah with AA Oct 31, 2019 11:15 am
Defense Minister Hulusi Akar told Turkish troops in Syria’s Tal Abyad to be prepared for everything, as he told them that Turkey’s Operation Peace Spring is not formally over. Akar was visiting the directing point in southeastern Şanlıurfa province near the Syrian border with Chief of Staff Gen. Yaşar Güler and Land Forces Commander Gen. Ümit Dündar.
Speaking through a transmitter, Akar asked the soldiers in Tal Abyad about how they were doing. The latter responded by saying that they are prepared for all duties and have an extremely high motivation.
The minister noted that security and defense are constantly needed to preserve peace and stability in the country, while he emphasized Turkey’s goal to protect the rights of Syrian people.
“We do not only work to protect the rights and interests of our country, we also work day and night to make sure that our Syrian brothers and sisters safely voluntarily return to their homes,” Akar said.
He highlighted that Turkey’s only target in the region is the terrorists.
“As Turkey, we have no business in the ethnic or religious background of anyone. We are extremely sensitive in this regard,” Akar said, adding that Turkey’s fight against terrorism will continue until the last terrorist is destroyed and the country’s borders are secured.
Regarding Turkey’s fight against Daesh, the defense minister said Turkey is the only country whose military was involved in direct combat with the terrorists. Akar noted that Turkey killed around 3,000 Daesh terrorists in northern Syria in Operation Euphrates Shield and 700 others in northern Iraq, while providing logistics and all means of assistance to the International Coalition Against Daesh.
Turkey launched Operation Peace Spring, the third in a series of cross-border anti-terror operations in northern Syria targeting terrorists affiliated with Daesh and the PKK’s Syrian offshoot the People’s Protection Units (YPG), on Oct. 9.
The operation, conducted in line with the country’s right to self-defense borne out of international law and U.N. Security Council resolutions, aims to establish a terror-free safe zone for Syrians return in the area east of the Euphrates River controlled by the U.S.-backed Syrian Democratic Forces (SDF), which is dominated by YPG terrorists.
The PKK — listed as a terrorist organization by Turkey, the U.S. and the European Union — has waged a terror campaign against Turkey for more than 30 years, resulting in the deaths of nearly 40,000 people, including women, children and infants.
Turkey has long decried the threat from terrorists east of the Euphrates in northern Syria, pledging military action to prevent the formation of a “terrorist corridor” there.
Since 2016, Turkey’s Euphrates Shield and Olive Branch operations in northwestern Syria have liberated the region from YPG/PKK and Daesh terrorists, making it possible for nearly 400,000 Syrians who fled the violence to return home.
Last Update: Dec 20, 2019 1:21 am
RELATED TOPICS