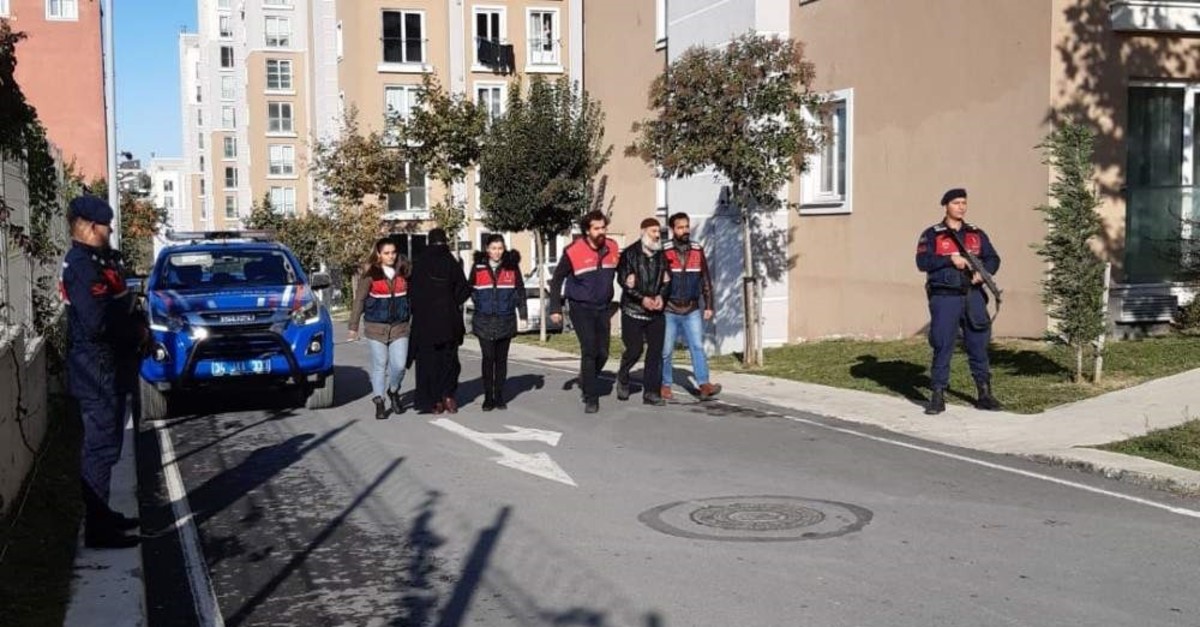 Turkish security forces detained seven more suspects who are believed to be members of the Daesh terror group in an operation conducted in five provinces, Nov. 3, 2019. DHA
by Daily Sabah Nov 03, 2019 5:38 pm

As one of the most efficient actors in the fight against the Daesh in northern Syria, Turkey is determined to eliminate the remnants of the terror group within the country


Turkey has again shown its determination to fight against the Daesh terror group at home.
In domestic anti-terror operations throughout the month of October, Turkish authorities have detained 410 Daesh-linked suspects and arrested 40 of them.
Turkish security forces have been conducting more and more nationwide operations against Daesh, including in major cities such as Istanbul, Ankara, and Adana, to ensure internal security.
According to information compiled by Anadolu Agency, some of the detained suspects were taken to court while others were deported to their countries of origin.
Ankara recognized Daesh as a terrorist organization in 2013. It is not surprising to see that Turkey has been involved in such intense counterterrorism operations and measures against Daesh since it is one of the countries that has suffered from the terrorist group the most.
More than 300 people have lost their lives in attacks claimed by Daesh in Turkey, where the terrorist organization has targeted civilians in suicide bombings, as well as rocket and gun attacks.
The terrorist group has targeted civilians in Gaziantep, Şanlıurfa, Istanbul and Ankara on multiple occasions, including in 10 suicide bombings, seven bomb attacks, and four armed attacks.
In response to these attacks, Turkey has launched military and police operations at home and abroad, being one of the most efficient actors in eliminating the Daesh threat in northern Syria.
Anti-terror units in the capital Ankara detained 20 foreign nationals who are allegedly involved with Daesh.
Two people were detained in Turkey's central province of Konya for allegedly spreading propaganda about Abu Bakr al-Baghdadi, the Daesh group’s leader who was killed in a U.S.-led raid in Syria last month.
Also, 79 Daesh suspects are being held across 13 provinces. Between Oct. 13 and Oct. 15, 146 suspects were detained nationwide.
A Daesh suspect was arrested when he was trying to enter Turkey from the southeastern border province of Şanlıurfa.
Another Daesh suspect, who is a British citizen of Iranian origin, was detained in the southeastern province of Kilis.
Two Syrian suspects were detained and deported in the southern Adana province. Five Syrian suspects were arrested in the central province of Kayseri. Three suspects were arrested in Şanlıurfa for plotting a terror attack.
Some 31 suspects were detained during anti-terror operations carried out in 10 provinces. Among them, 19 were released on judicial control.
Security forces acted on an intelligence tip and carried out an operation in the eastern provinces of Malatya and Bingöl. They foiled a terrorist attack and detained 13 suspects.
Daesh plotted terrorist attack on national holiday
Turkish security forces also struck a great blow to Daesh before Oct. 29, Republic Day in Turkey.
Some 100 suspects who were plotting to attack Republic Day celebrations in Turkey were detained in operations across 21 provinces.
Also, three suspects who were plotting attacks to avenge the killing of Baghdadi in Istanbul were detained.
Turkey has been actively conducting counterterrorism operations against Daesh since 2016. Since then, 4,517 of the 13,696 suspects detained in 4,536 operations have been arrested.
In the operations conducted, 1,018 terrorists were either killed, injured or had surrendered.
Today, 1,174 Daesh terrorists are imprisoned in Turkey.
In order to apprehend Daesh suspects, 64 risk analysis units that include experts on terrorism and intelligence have been formed in 30 provinces. The units have been regularly monitoring suspects that operate within their regions, as well as all other developments regarding the terrorist group, both within and outside the country.
Also, 75,480 foreign nationals with links to Daesh were banned from entering Turkey.
In the southeastern province of Gaziantep, three men were sentenced to six years, three months in prison for entering a restricted military zone. Three women received two years, 15 days of jail time in the same case.
In the Aegean province of Kocaeli, four suspects are on trial for being members of Daesh. In Adana, a Syrian man is facing trial over the same charge.
Lastly, Interior Minister Süleyman Soylu yesterday announced that seven suspects were arrested in an anti-Daesh operation conducted in five provinces.
Last Update: Dec 20, 2019 1:25 am
RELATED TOPICS