Ankara to return detained Daesh fighters to countries of origin 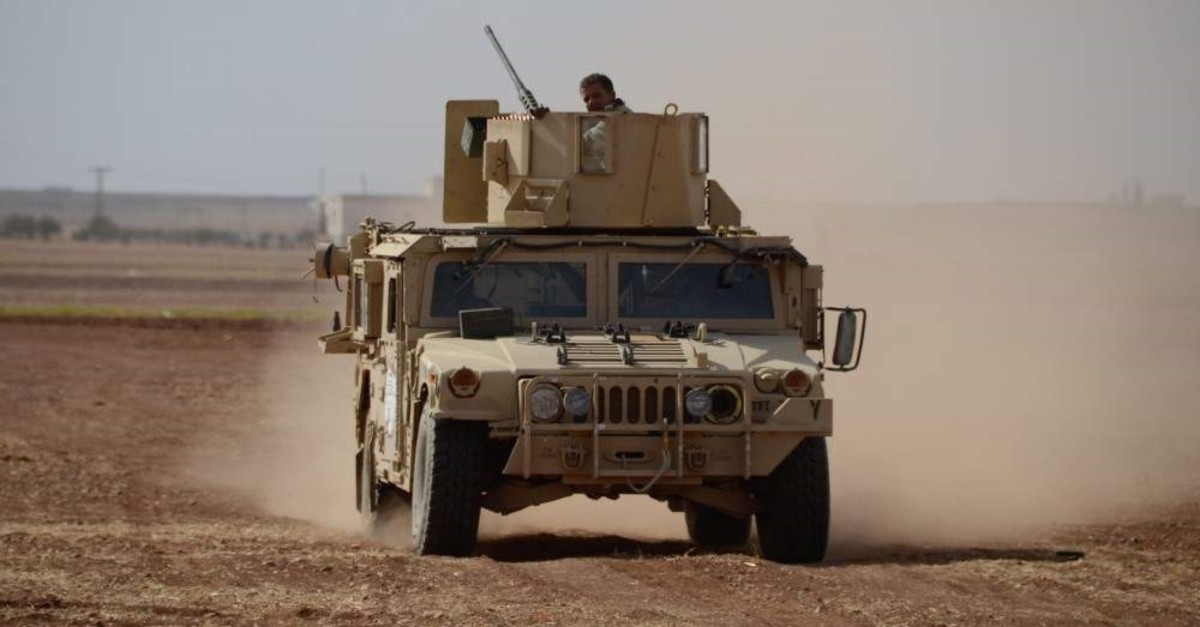 On Aug. 24, 2016, Turkey launched Operation Euphrates Shield with the aim of clearing part of northern Syria of Daesh terrorists, becoming one of the most effective actors in the fight against the terror group. AA
by Daily Sabah Nov 04, 2019 7:56 pm

All detained foreign Daesh terrorists will be sent back to their countries of origin, even if their citizenships have been revoked, Turkey stated yesterday in response to certain European countries’ efforts to strip the citizenship of terrorists in order to get rid of them.
Reiterating Turkey's determination to deport Daesh terrorists, Interior Minister Süleyman Soylu yesterday said that the country will send them back to their home countries regardless of their citizenship status.
"The world has adopted a new method involving the revoking of citizenship to avoid responsibility," Soylu said, adding that this approach violates the standards of international law.
He noted that Turkey currently holds 1,200 Daesh terrorists in confinement. Around 287 of these were detained following Operation Peace Spring, Soylu said, noting that some included women and children.
"All of those in prison are foreign terrorist fighters. There are also some foreign fighters in our repatriation centers too," the minister told reporters, adding that Turkish authorities are on alert regarding these terrorists and will continue to detain yet more.
Countries which fail to deal humanely with immigrants and refugees now create legal problems by resisting taking back terrorists who came from their soil, Soylu also stated. He added that work was being done to resolve issues with the prisoners.
Turkey has criticized countries which resist repatriating terrorists by revoking citizenship. The number of Daesh terrorists released by the PKK's Syrian affiliate People's Protection Units (YPG) is said to be close to 750. 265 of those terrorists have surrendered and are now being detained under the guard of the Turkish army. The issue of repatriating citizens who have fought for Daesh in Syria remains to a divisive one in Europe, with many countries refusing to accept the terrorists.
Other Daesh members were caught entering Turkey during various times, Soylu added. When caught, they are taken to the judicial authorities, and then either go to prisons or repatriation centers, and Turkey periodically returns them to their home countries, the minister explained.
Regarding minors born of Daesh members who were held in Syria, Soylu said last month, “In line with our laws, the children will be referred to related institutions to ensure their protection,” stating that Turkey would accept them as Daesh-linked Turkish citizens. According to a Foreign Ministry spokesman, Turkey is “ready to work together with the countries of origin and international organizations for the rehabilitation of spouses and children who have not been involved in crimes committed by foreign terrorist fighters affiliated with Daesh.”
Effective fight against Daesh
As part of Turkey’s Operation Peace Spring, launched on Oct. 9, the country has fought to clear northern Syria in the area east of the Euphrates River of terrorist elements, while also making sure Daesh prisoners there remain in detention.
Turkey has taken measures against foreign fighters since the beginning of the Syrian civil war in 2011. According to judicial sources, over 70,000 people have been banned entry to the country, and over 7,000 linked to terrorist groups or fugitives have been deported.
Turkey has long criticized European countries for allowing those people to reach its borders.
Since Turkey recognized Daesh as a terrorist group in 2013, Turkey has been attacked by Daesh terrorists numerous times, including 10 suicide bombings, seven bombings and four armed attacks which killed 315 people, including police officers and soldiers, and injured hundreds.
In response to these attacks, Turkey has launched military and police operations at home and abroad, being one of the most efficient actors in eliminating the Daesh threat in northern Syria, eliminating 3,500 Daesh terrorists and arresting more than 5,500.
Over the course of domestic anti-terror operations throughout the month of October, Turkish authorities detained 410 Daesh-linked suspects, charging 40.
Turkish security forces have been conducting more and more nationwide operations against Daesh across major cities, including Istanbul, Ankara, and Adana, in the name of preserving internal security.
In order to apprehend Daesh suspects, 64 risk analysis units that include experts on terrorism and intelligence have been formed in 30 provinces. The units have been regularly monitoring suspects that operate within their regions, as well as all other developments regarding the terrorist group, both within and outside the country.
Recently, two female Dutch terrorists were detained after visiting the Dutch Embassy in Ankara, having asked to be sent back to their homeland. The Netherlands has clearly stated that it does not wish for the return of Daesh terrorists, launching a process to strip them of citizenship.
Last Update: Dec 20, 2019 1:26 am
RELATED TOPICS