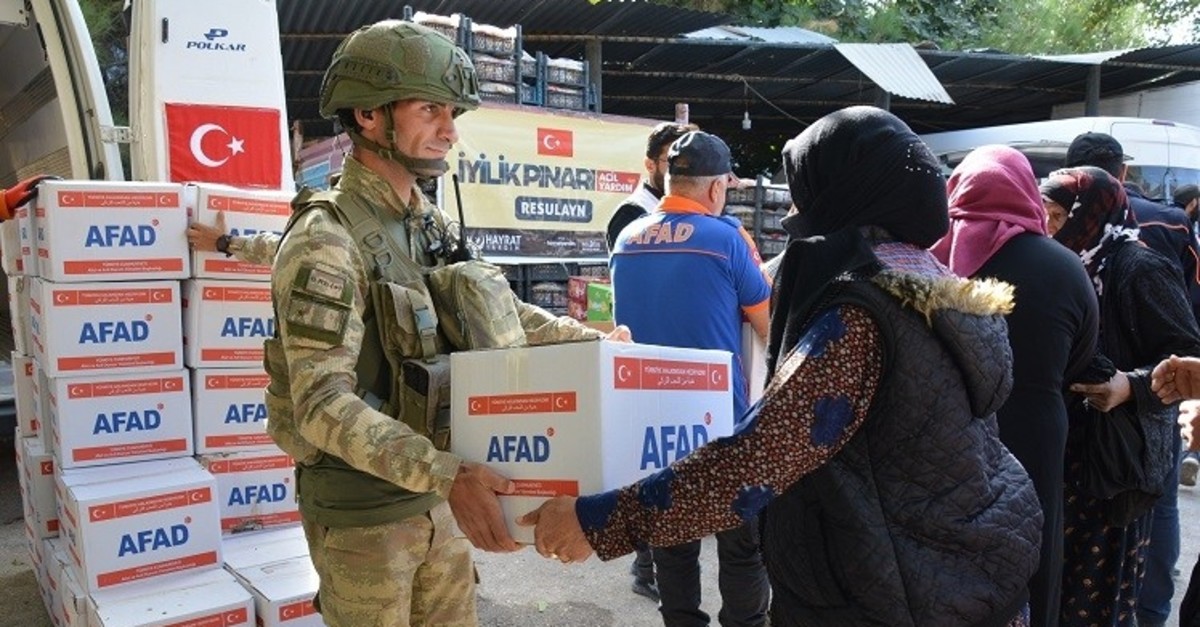 Operation Peace Spring put an end to the YPG's oppression and persecution in Tal Abyad and Ras al-Ayn regions, thus making way for our Syrian brothers, who took refuge in Turkey, to return to their homes and lands voluntarily and safely, the Turkish Defense Ministry said Monday.

The Turkish Red Crescent (Kızılay) also continues to distribute donations to people of the region.

A video released by the Defense Ministry showed local residents expressing their gratitude for Turkey’s efforts, humanitarian and military, and praying for the safety of Turkish soldiers.

“Our lives have improved after the arrival of Turkish soldiers; peace, tranquility and stability were restored here,” a man said in the video, expressing his happiness about the current situation.

The oppression and persecution of the PKK / YPG terrorist organizations was terminated in Tel Abyad and Rasulayn with the Operation Peace Spring, thus the way was opened for our Syrian brothers to return to their homes and lands voluntarily and safely.https://t.co/cCSlv4tzwj pic.twitter.com/t2t40QM3MZ

"Although YPG terrorists treacherously used many hospitals and places of worship as weapon emplacements and shelters by deliberately wearing civilian clothes and disregarding the lives of civilians, great attention and effort have been shown to avoid harm to innocent civilians and the environment," the ministry also said.

"The Turkish Armed Forces will continue to stand by and support all the innocent people leading a modest life in the region, regardless of their religious and ethnic origin. Our fight is only against terrorists. Operation Peace Spring has been carried out solely and completely against Daesh and YPG terrorists to ensure peace and stability in the region on the basis of moral values and international law,” it added.

Tal Abyad is populated to a great extent by Arabs and was occupied by the Daesh terrorist group in 2014. A year later, the PKK terror group's Syrian offshoot the YPG occupied the city with the support of the U.S.

Tal Abyad was cleared of terrorists as part of Operation Peace Spring on Oct. 13. Since then, locals have gradually returned with humanitarian aid being provided with the help of the Turkish Armed Forces and the Turkish Red Crescent.

At least 10,000 people were given food and hygiene products and hundreds of others have been provided checkups.

In its more than 30-year terror campaign against Turkey, the PKK, listed as a terrorist organization by Turkey, the U.S., and the European Union, has been responsible for the deaths of 40,000 people, including women, children and infants. The YPG is its Syrian offshoot.

Meanwhile, residents of northern Syria – recently liberated by Turkey’s anti-terror operation – are getting their medical needs met in southeastern Turkey.

Locals from Ras al-Ayn are able to receive treatment at Viranşehir State Hospital in the Turkish southeastern border province of Şanlıurfa.

Turkey has provided ambulances to bring those in need of advanced health care services in Ras al-Ayn to across the border.

After first receiving treatment at Ceylanpınar State Hospital near the border, patients with greater needs are transferred to Viranşehir for advanced treatment.

The Turkish Health Ministry has sent in reinforcements of doctors and hospital staff to deal with the influx.