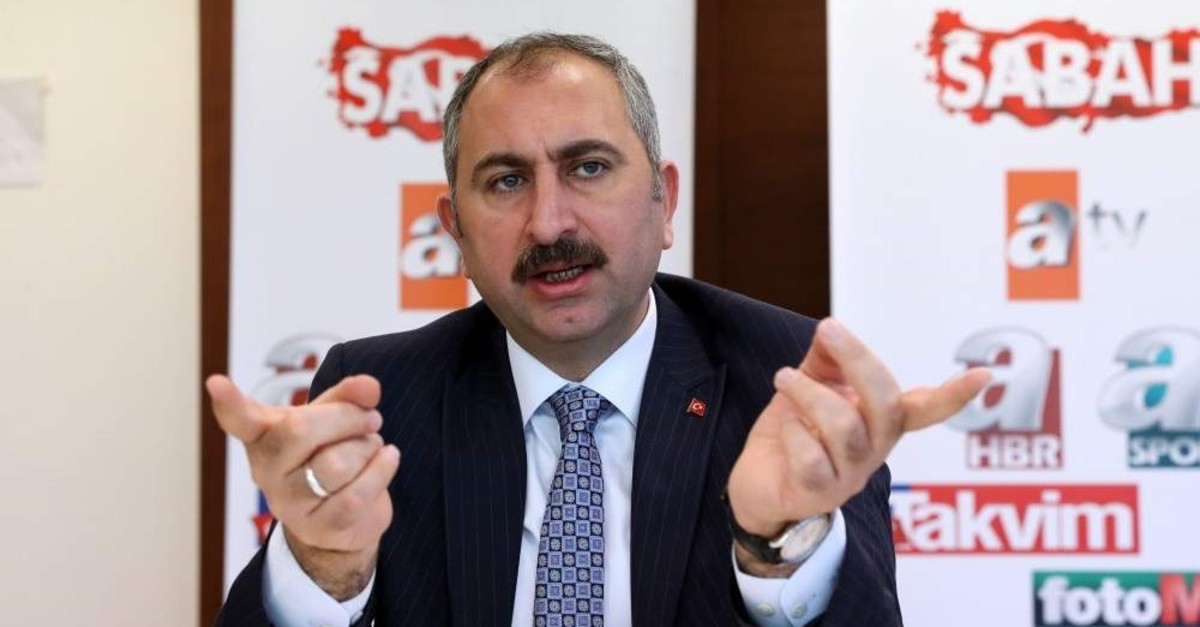 Justice Minister Abdulhamit Gül called for the international community to take back their citizens that took membership in Daesh and are currently hosted in Turkish prisons. The minister stated that they need to be prosecuted in their own countries, in contrast to the recent proposals by the European Union to strip the jailed Daesh members of their citizenship and leave them stateless.

“There are 1,172 Daesh members in our prisons, 750 of these are foreigners. The judicial processes of Turkish citizens among those continue, but you have to prosecute your citizens as well,” the minister told Daily Sabah yesterday.

Turkish officials have criticized countries that are resisting repatriating terrorists by revoking citizenship. The number of Daesh terrorists released by the PKK terrorist organization’s Syrian affiliate, the People's Protection Units (YPG), is said to be close to 750. Some 265 of those terrorists have surrendered and are now being detained under the guard of the Turkish Army. The issue of repatriating citizens who have fought for Daesh in Syria remains a divisive one in Europe, with many countries refusing to accept the terrorists.

“Turkey is not a hotel for any country's terrorists and it will send all detained Daesh members back to their home countries,” Interior Minister Süleyman Soylu said Saturday, as European countries continue to refuse to repatriate citizens who fought for the terrorist group in Syria.

"Countries can't just revoke the citizenship of such ex-terrorists and expect Turkey to take care of them; this is unacceptable to us and it's also irresponsible," Soylu told reporters.

Soylu's remarks followed reports that two female Dutch terrorists were detained after visiting the Dutch Embassy in Ankara, after they asked to be sent back to their homeland. The Netherlands has clearly stated that it does not want Daesh terrorists back.

Referring to the YPG terrorist leader Ferhad Abdi Şahin, also known as Mazloum Kobani, who is wanted in 196 countries and by Interpol, Justice Minister Gül stated, “If Ferhad Abdi Şahin is not returned, we cannot believe they [the U.S.] fights against terrorism.”

He explained that in order for the U.S. to be informed immediately on the terrorist leader the Defense Ministry has sent the file beforehand, “therefore, as someone sought with a Red Notice by Interpol, this person has to be returned to Turkey once he enters the U.S.”

Further highlighting the procedure, Gül added, “When the possibility of him [Şahin] going to the U.S. became clearer, again we brought the issue of his return to the agenda with a notice of our Foreign Ministry. When someone on the return procedure enters the country, he must be detained temporarily just to be sent to the country requesting his return.”

The Justice Ministry has prepared an extradition requisition for YPG leader Şahin who is the commander-in-chief of the so-called Syrian Democratic Forces (SDF), which is dominated by the YPG. Interpol currently has a Red Notice warrant out in Şahin's name for playing a crucial leadership role in the YPG. He is the adopted son of the PKK's imprisoned founder Abdullah Öcalan, who is now serving a life sentence in a Turkish prison.

Similarly, the U.S. ignored Turkey’s calls to return Fetullah Gülen, the fugitive leader of the Gülenist Terror Group (FETÖ) who lives in his Pennsylvania compound, “which makes it again hard to believe the U.S. fights against terrorism,” the justice minister said.

“We submitted new documents on the FETÖ leader to the U.S. justice department, if our president visits the U.S., this issue will be on his agenda,” Gül underlined. “When we last came together with the U.S. secretary of defense, we submitted these documents reflecting that FETÖ was linked directly with the coup while also sending them through official channels.”

Recently, the U.S. released a terrorism report which ignored both the YPG and FETÖ. The U.S. presented the ringleader of FETÖ, another terror group targeting Turkey, as a “self-exiled cleric,” which could be interpreted as ignoring and supporting the July 15 coup attempt.

Referring to the report, Gül stated, “As can be seen in the report, Gülen was presented as a cleric instead of the head of an organization which harmed democracy in Turkey, killing 251 people.”

Turkey's ruling and opposition parties urged the U.S. to take the necessary steps to extradite Gülen to Turkey. The four political parties in Parliament expect the U.S. and all other partners to pay regard to Turkey's stance regarding FETÖ, a statement released by the ruling Justice and Development Party (AK Party), Nationalist Movement Party (MHP), main opposition Republican People's Party (CHP) and the Good Party (İP) said in August. The statement continued by saying that the parties call on the U.S. to take steps to extradite all FETÖ members to Turkey soon. FETÖ is accused of staging the July 15 coup attempt that tried to overthrow Turkey's democratically elected government and killed 251 people and injured nearly 2,200 others.

“This is a terrorist organization and a leader that has fled Turkish law and has blood on its hands, causing the death of 251 people. According to the bilateral extradition agreement, even the doubt of the U.S. is enough for the return, what kind of state seriousness and understanding of the law is this? There is solid evidence beyond doubt and still, you do not return him. Within this context, the situation is not a legal issue anymore but a political one,” Gül said.

On Turkey’s freedom of speech and thought

In May, Turkey introduced a new judicial reform package with the aim to strengthen the independent, objective, accountable and transparent features of the judiciary.

The means for supreme courts to function more effectively have been opened for crimes under five years in the first judicial package, which will strengthen freedom of thought and speech, according to the minister.

“As the AK Party, our perspective is libertarian and strengthening human rights. Within this framework, a right to apply to the Supreme Court has been brought. If there is a different assessment, a falsely given decision, a higher court has the chance to review this,” Gül stated, indicating that therefore these claims on Turkey are unjust.

“The court delivers its decision after the trial. In this matter, according to the scope of the file, those who need to get punishment, get punishment and those who need to be acquitted are acquitted. This is best known by relevant western institutions and taking the Supreme Court to supervision in the last package has also been met positively,” the minister explained.