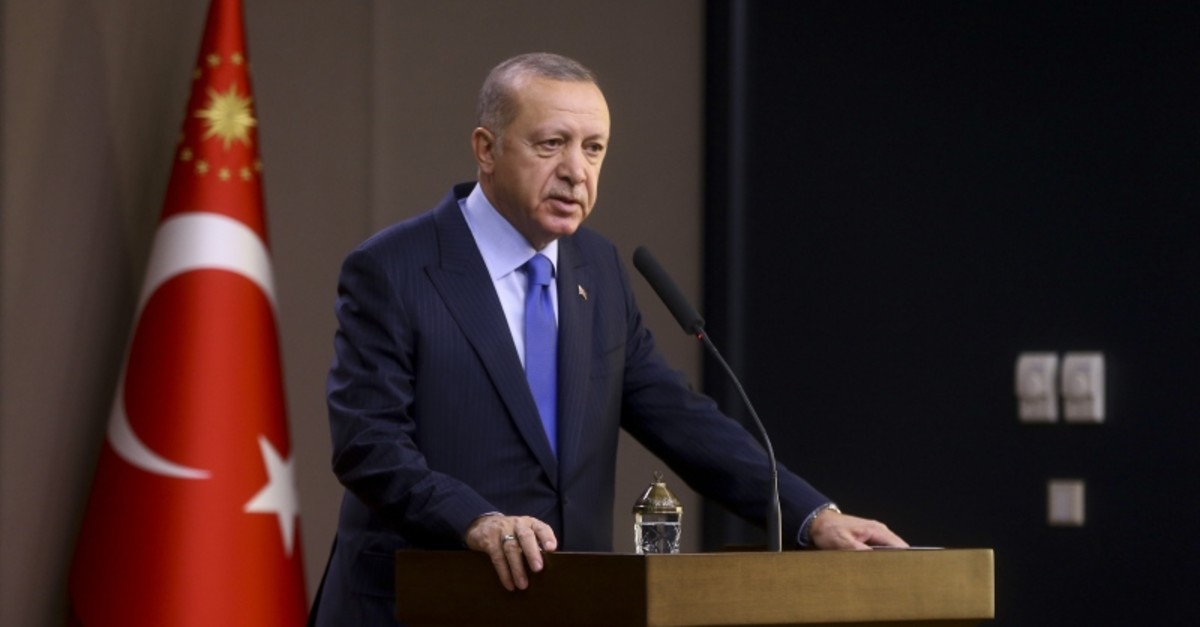 Turkey will continue to deport foreign Daesh terrorists to their countries of origin, President Recep Tayyip Erdoğan said Tuesday.
"Some countries have started panicking after we began the repatriation process of foreign Daesh terrorists. Turkey has been worrying about this issue for years, let others worry now," Erdoğan told a news conference ahead of his official visit to the U.S.

He noted that it does not matter whether these countries accept the terrorists or not.

“The American Daesh terrorists stranded in buffer zone on Greece border is none of Turkey's concern, deportations will continue regardless,” Erdoğan said, referring to an American terrorist who was not admitted by Greece, leaving him stranded in the buffer zone between Turkey and Greece.

There are 1,201 Daesh terrorists in Turkish prisons, while Turkey captured 287 fighters during Operation Peace Spring in Syria.

The issue of repatriating citizens who fought for Daesh in Syria remains a divisive problem in Europe, with many countries refusing to accept the terrorists.
Turkey has criticized Western countries for refusing to repatriate their citizens who left to join Daesh in Syria and Iraq, and stripping some of them of their citizenship. Although the 1961 New York Convention made it illegal to leave people stateless, several countries, including Britain and France, have not ratified it, and recent cases have triggered prolonged legal battles. The U.K. alone has stripped more than 100 people of their citizenship for allegedly joining terrorist groups abroad.

Touching upon the safe zone in northern Syria, Erdoğan said Russia and the U.S. did not fully clear People’s Protection Units (YPG) terrorists from the area specified in the safe zone agreements with both countries.

“I will discuss this with Trump [during my visit] and with Putin on the phone upon my return,” the president said.

The Turkish Armed Forces fully comply with the existing agreement regarding the establishment of a safe zone but PKK/YPG terrorists continue transgressing the area of Operation Peace Spring, violating the pause with mortar and rocket attacks and sniper fire.
Operation Peace Spring was launched on Oct. 9 to eliminate terrorist YPG/PKK elements from northern Syria east of the Euphrates River in order to secure Turkey's borders, aid in the safe return of Syrian refugees and ensure Syria's territorial integrity.
Ankara agreed with Washington on Oct. 17 to pause its operation to allow YPG/PKK terrorists to withdraw from the planned safe zone.
On Oct. 22, Ankara and Moscow reached a deal under which YPG/PKK terrorists were to pull back 30 kilometers south of Turkey's border with Syria within 150 hours, and security forces from Turkey and Russia would mount joint patrols there.

Erdoğan expressed Turkey’s determination to enhance relations with the U.S., saying that he is on the same page with President Donald Trump regarding the matter.

However, he noted that he will highlight the issue of PKK-linked People’s Protection Units (YPG) terrorist Ferhat Abdi Şahin (Codename Mazloum Kobani) during his visit.

“We will prove with documents that Ferhat Abdi Şahin is a terrorist,” the president said, adding that Turkey wants to launch a new era regarding the security of both countries.

Turkish officials are disturbed by the U.S. and other allies' talks and cooperation with PKK-linked figures. For instance, Trump recently said he spoke with Ferhat Abdi Şahin (Mazloum Kobani), who is the ringleader of the SDF and is sought with a Red Notice. The U.S. president praised the terrorist leader, noting that he would soon visit Washington, while Turkish officials urged the U.S. to immediately extradite him as per the Interpol arrest warrant.
The PKK is recognized as a terrorist organization by Turkey, the U.S. and the European Union and has waged a terror campaign against Turkey for more than 30 years, resulting in the deaths of nearly 40,000 people, including women, children and infants.