Dead or alive, Kurdish families determined to save children abducted by PKK 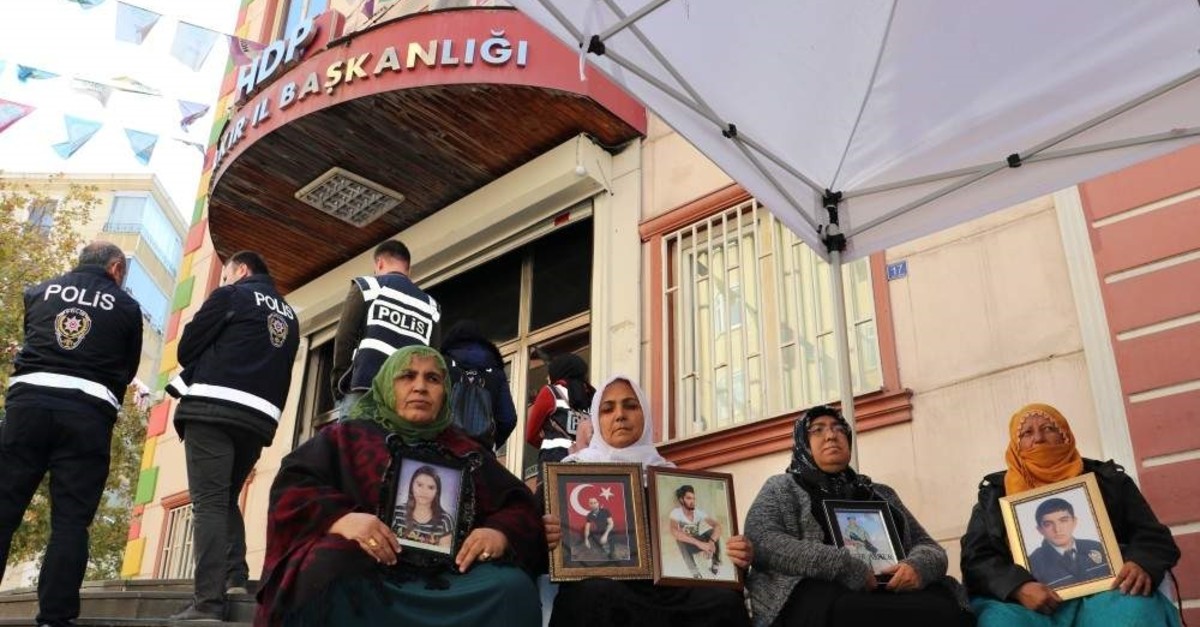 Kurdish mothers whose children abducted by PKK terrorist group have been continuing their sit-in protest for 73 days in front of HDP headquarters in Diyarbak?r, Nov. 12, 2019.
by Daily Sabah Nov 13, 2019 7:46 pm

Dead or alive, they will get their children back, say the Kurdish families who have been protesting for over 70 days in front of the headquarters of the pro-PKK Peoples' Democratic Party (HDP) in Diyarbakır. Showing great patience and determination for their cause, 53 families are participating in the sit-in protest. They say their children have been abducted by the PKK terrorist group with the assistance of the HDP.

"We have been here for 72 days. They should not assume that we will leave eventually," said Salih Gökçe, a father whose 24-year-old son Ömer was abducted five years ago and allegedly taken to Syria to fight for the PKK's Syrian affiliate, the People's Protection Units (YPG). Gökçe says he just wants his son back, even if it is his body that is returned. The father said he has dedicated his life to this cause, putting aside his normal life. Gökçe, who is from the eastern province of Ağrı, said that if necessary, he will rent a house in Diyarbakır. Gökçe, whose other son is a soldier, has been participating in the protest since Sept. 17.

Initially, a lone protest was started by mother Hacire Akar in front of the HDP provincial organization in Diyarbakır in September. Akar wanted to see the return of her 21-year-old son Mehmet Akar, who had been missing for three days after he was abducted by the PKK terrorist group. Following her sit-in, and with the help of security forces in Diyarbakır, Akar was finally reunited with her son.

"There are some visitors. They are coming from all over Turkey. They also come from the U.S. Lots of parents are here. We have been waiting here, not minding the cold or the rain. There are mothers of soldiers, policemen [here]," Gökçe said.

Gökçe added that he went to the HDP and Syria after the abduction of his son with the aim of finding him, yet both of his attempts failed.

"If a man comes to my door and sits down for five minutes, I'd ask him what he is doing there," Gökçe said, criticizing the HDP for its carelessness on the issue. He added that despite demanding votes from the Kurds constantly, the party ignores the suffering of Kurdish families, revealing its true face.

The HDP, long facing public reactions and judicial probes over its ties to the PKK, is under pressure due to this growing civilian protest launched by mothers and local families. Families are accusing the party's leaders of sacrificing regular people's children while providing luxurious lives to their own. Despite all the accusations and sorrow surrounding the party, the HDP still turns a blind eye to Kurdish families and has gone as far as to threaten them.

Among the families, seeing the HDP and PKK as groups who cause nothing but suffering for the Kurds seems a common theme. Songül Altıntaş, a mother whose son Müslüm was also abducted five years ago, expressed that the PKK's continuing torture of the Kurds feels like it is never-ending.

"No matter how much we have tried, the PKK has not released my son. Can they afford to deal with poor people like us only? I'm calling on the PKK: enough," says Altıntaş.

"By bringing the youth to the mountains, you [the PKK] are causing the extinction of the Kurds," she said, underlining that she believes the Turkish government will save them from their suffering.

Altıntaş said that there is no point of living without her son.

"While my child is suffering there, I cannot be happy. I am suffering, I am in deep sorrow. What will I do when I go back home? I will not leave without my child," she said.

"We have been here for 72 days. Even if it lasts for 72 years, we will continue to be here. We will not leave without our children," said mother Hatice Levent about the protest. She is looking for her abducted daughter Fadime.

Levent also called on her daughter: "Halime, my daughter, I beg you to come back home if you can see or hear me, my child. Your siblings and I have missed you a lot."
RELATED TOPICS