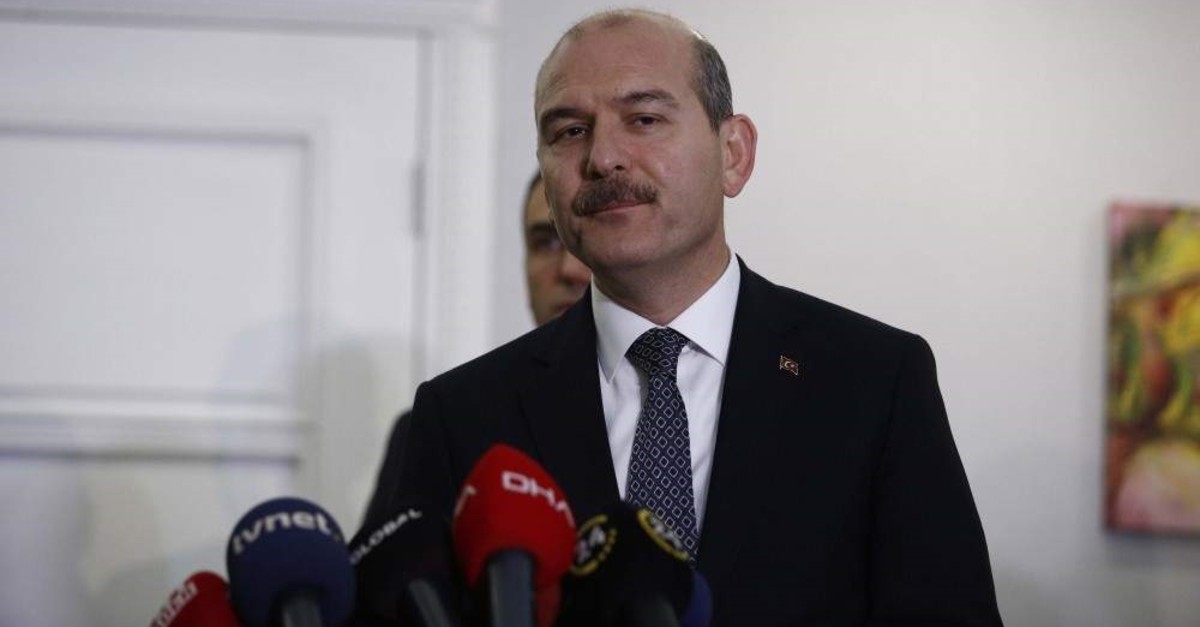 ICISLERI BAKANI SULEYMAN SOYLU GAZETECILERIN SORULARINI YANITLADI.FOTO-HARUN OZALP-ANKARA-DHA
by Daily Sabah Nov 15, 2019 5:54 pm
Turkey captured a Daesh terrorist responsible for organizing attacks in Turkey and Europe, the interior minister announced on Friday.
A few days ago, Turkey had announced that an important member of the Daesh terrorist group was caught in an operation in Syria, it turned out that this figure was responsible for bombings in Europe and in Turkey, Interior Minister Süleyman Soylu said. Answering the questions of journalists, the minister said that the terrorist’s interrogation continues.
The minister further elaborated on the repatriation process of former Daesh terrorists.
“The Daesh terrorist stranded at the Greece-Turkey border has been extradited to the U.S. from Istanbul. There are two more German Daesh member citizens. Today, three foreign terrorists in total that we define as fighters and that are not of our nation were deported from Turkey,” Soylu said.
The terrorist Muhammad Darwis Bassam, a U.S. citizen of Jordanian descent, was deported from Turkey on Monday from the Pazarkule Border Gate on the border with Greece. Since he was not initially admitted by the U.S., his country of origin, he was deported to a country of choice, which was Greece. As Greek authorities refused to take the terrorist, he was left stranded in the buffer zone between the two countries.
The issue of repatriating citizens who fought for Daesh in Syria remains a divisive problem in Europe, with many countries refusing to accept the terrorists, while Ankara is determined to send the foreign fighters back to their countries of origin.
Turkey has criticized Western countries for refusing to repatriate their citizens who joined Daesh in Syria and Iraq, stripping some of them of their citizenship. Although the 1961 New York Convention made it illegal to leave people stateless, several countries, including Britain and France, have not ratified it, and recent cases have triggered prolonged legal battles. The U.K. alone has stripped more than 100 people of their citizenship for allegedly joining terrorist groups abroad.
President Recep Tayyip Erdoğan said on Nov.8 that there are 1,201 Daesh terrorists in Turkish prisons, while Turkey has also captured 287 fighters in Syria.
Last Update: Dec 20, 2019 1:43 am
RELATED TOPICS