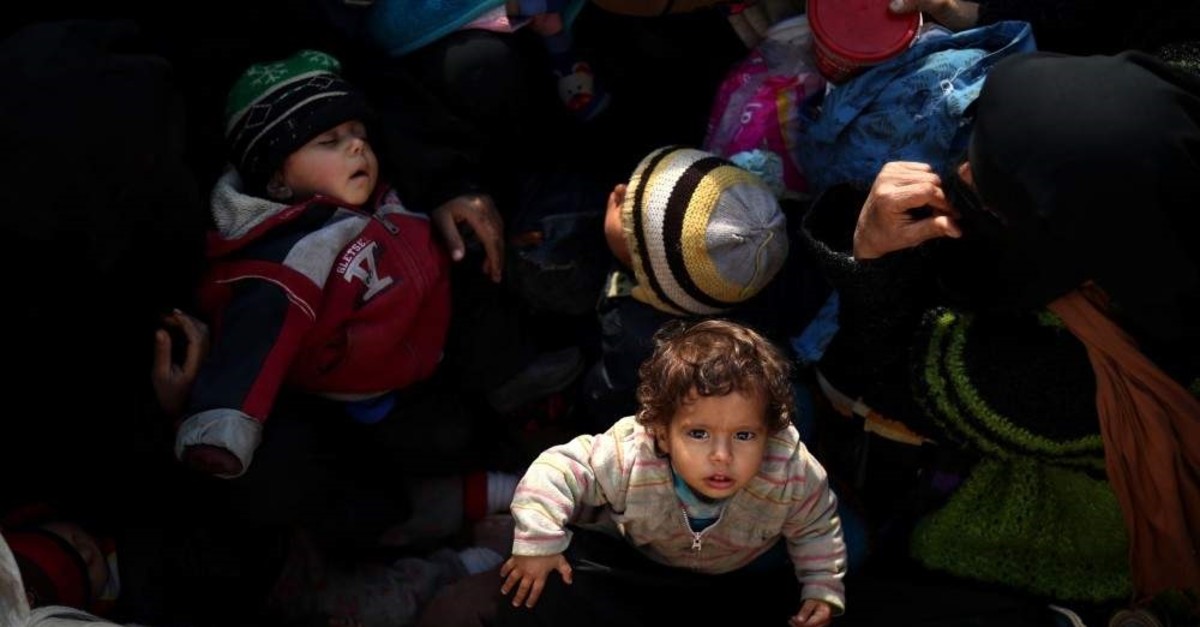 This file photo shows civilians fleeing the battered Daesh-held holdout of Baghouz in the eastern Syrian province of Deir el-Zour sitting in the back of a truck on February 11, 2019. (AFP Photo)
by Daily Sabah with AA Nov 18, 2019 6:11 pm

The appalling conditions in the camps of the PKK’s Syrian affiliate, the People’s Protection Units' (YPG), in which Daesh terrorists are being held, has drawn condemnation from a Belgian human rights group yesterday after five babies of Belgian origin passed away due to negligence.
Speaking to Belgium's De Morgen daily, the director of the Child Focus human rights group said that the horrible conditions in the camps alone were more than enough to cause the death of the children.
Having visited the camps with a child psychologist a number of times, Heidi De Pauw stated that thousands of people were trying to survive without the most basic of needs.
“The reason why children are dying in the al-Roj and al-Hol camps is the horrible conditions,” she said. Pauw added that one of the five infants killed was a new born and malnutrition and injuries caused them to die. “The time is running out. The Belgian children should be brought back to the country urgently,” she called, underlining that her pressure toward the Belgian government on the issue will continue.
The camps are a holding place for civilians who escaped the conflict between the Daesh terrorist group in Deir el-Zour, along with the families of former Daesh members who surrendered and captured terrorists. Most of the civilians were forcefully brought to the camps by the YPG in April 2017, according to reports.
Several human rights organizations and the United Nations have repeatedly warned that conditions in the al-Hol camp are worsening each day, and have demanded access to the centers where the families of former Daesh members are being held. According to the U.N., there are currently some 73,000 people held in the camp, 92% of whom are women and children and 15% of whom are foreign nationals. The inhumane conditions in al-Hol are only one face of the YPG's atrocities, as the group has been accused of various human rights violations, from child recruitment to oppression of local people's customs and ways of life.
YPG freed over 800 Daesh terrorists
Apart from holding them in deadly conditions, YPG continues to have a mixed relationship with the Daesh as their ties seem to be fluctuating from being hostile to cooperate on various topics. The latest of the examples of YPG’s absurd attitude toward Daesh occurred on Sunday as Turkish Defense Ministry said that the terrorist group released over 800 Daesh prisoners of war in Tal Abyad, Syria.
"Turkey is the only member of NATO and the Coalition (against Daesh) to fight hand to hand and neutralize over 4,000 members of Daesh in Iraq and Syria," the Defense Ministry said on Twitter.
"But the YPG has released over 800 Daesh members from the Tal Abyad prison," it added.
The overall number of Daesh terrorists released by the YPG is said to be close to 750.265 of those terrorists have surrendered and are now under the control of the Turkish army.
Since 2016, Turkey has carried out three major military operations in northern Syria – Euphrates Shield, Olive Branch and Peace Spring – with the aim of purging the region of terrorist groups.
Turkey on Oct. 9 launched Operation Peace Spring to eliminate YPG terrorists from northern Syria east of the Euphrates River in order to secure Turkey's borders, aid in the safe return of Syrian refugees and ensure Syria's territorial integrity.
The YPG, which is the Syrian offshoot of the PKK, had attempted to use captured Daesh terrorists as a bargaining chip to provoke the West against Turkey. Ankara wants YPG terrorists to withdraw from the region so that a safe zone can be created to pave the way for the safe return of some 2 million refugees.
The issue of the handling of Daesh members and their families detained in Syria, including foreign members of the terror group, has been controversial, with Turkey arguing foreign-born terrorists should be repatriated to their countries of origin. Last week Turkey started to deport foreign fighters it captured in anti-terror operations at home and abroad to their countries of origin. Western countries are mostly hesitant to accept citizens who joined the Daesh terrorist group in Syria.
Turkey has criticized Western countries for refusing to repatriate their citizens who left to join Daesh in Syria and Iraq, and stripping some of them of their citizenship. Although the 1961 New York Convention made it illegal to leave people stateless, several countries including France have not ratified it, and recent cases have triggered prolonged legal battles.
Some countries like the U.K. revoked the citizenship of the terrorists to prevent their extradition but Turkish officials are determined to extradite the detained terrorists to their countries of origin under the scope of international legal procedures.
Still, Turkey continues its efforts to send captured Daesh terrorists back to their original countries, while still fighting against Daesh and other terrorist elements.
Yesterday, an al-Qaida terrorist who was in the most wanted list of the Interior Ministry has been arrested in Istanbul. The terrorist Mevlüt Coşkun was captured in Istanbul on Nov. 13.
President Recep Tayyip Erdoğan said on Nov.8 that there are 1,201 Daesh terrorists in Turkish prisons, while Turkey has also captured 287 Daesh fighters in Syria.
Last Update: Dec 20, 2019 1:46 am
RELATED TOPICS