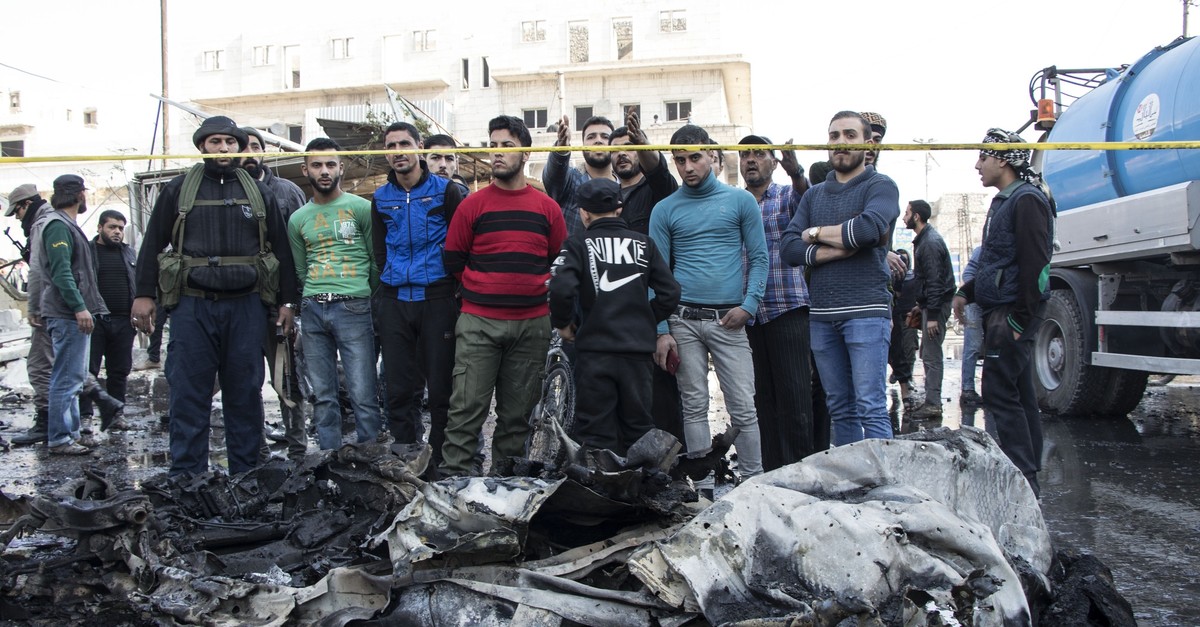 People look at the wrecks of a bomb vehicle placed by YPG terrorists in al-Bab, Nov. 16, 2019. (AA Photo)
by Daily Sabah Nov 19, 2019 5:55 pm
Despite multiple deals stipulating the complete withdrawal of the PKK’s Syrian affiliate the People’s Protection Units (YPG) from northern Syria, the terrorist group still manages to sneak into areas liberated by Turkish military forces with bomb-laden vehicles that have killed nearly 100 civilians in the region.
In the last 2.5 months, a total of 50 bomb-laden vehicles were spotted in areas cleared of terrorist elements through Turkey’s three consecutive cross-border offensives. Although Turkish military forces in the region, alongside their partner in the field, the Syrian National Army (SNA), are closely monitoring the region to ensure peace, take necessary measures and defuse vehicles as soon as they are found, the bombs placed by the YPG in crowded areas of the cities have still claimed the lives of numerous civilians.
The latest vehicle laden with explosives was identified in recently-liberated Tal Abyad’s Ali Becliye village. According to local sources, 11 civilians were injured despite the bomb in the vehicle being defused. In another incident that took place on Nov. 10 in Tal Abyad’s Suluk town, a vehicle parked in front of a bakery killed seven civilians. Similarly, last week in the Hamam village of Tal Abyad, mostly populated by Turkmens, two bomb-ridden vehicles were defused without causing harm to any civilians.
The placement of these car bombs suggests that the main target areas for the terrorist group are bazaars and bakeries – places frequented by people daily. The province that was targeted the most, however, was al-Rai, a small town in the region. The latest attack in the town took place in a village three days ago while in the last 2.5 months, a total of 15 bomb-laden vehicles, some of which were motorcycles, were spotted throughout the region. In these attacks, at least 20 people were killed, most of whom were civilians, while 50 people were injured.
The attack with the highest death toll took place in al-Bab last week when 18 people were killed in a car bombing. Although the YPG initially claimed that the attack was organized by a Daesh terrorist that snuck into the SNA, the National Intelligence Service (MİT) quickly captured the real perpetrator of the attack, who was a YPG terrorist. The SNA also denied the allegations on Monday. Following the attack, schools had to be evacuated while locals demanded the terrorist be executed.
The organizers of the terrorist attack in al-Bab were found to be the so-called Manbij heads of the YPG, going by the code-names İskender and Ebu Ziyad. They were linked to the PKK’s Iraq branch in the Qandil mountains. Previously, intelligence services reported that as a result of the Turkish military’s successful operations in the Qandil mountains, the terrorists there were crossing into Syria and joining the ranks of the YPG have been captured. Reports also claimed that the terrorists coming from Iraq were being re-ranked within the YPG as senior figures.
Locals say the YPG employs three different methods to sneak such explosive-ridden vehicles into the provinces. Some vehicles are placed by the terrorists themselves and then detonated with a remote control. In other cases, collaborators are used, whom the terrorists convince via money or threats. Once a collaborator is convinced, a bomb is loaded onto their car and placed in the city centers, only to be detonated afterward. Their latest method, however, is to detain individual drivers while they are on their way to enter the liberated areas. The YPG places the bombs in their vehicles while they are in detention. After the driver is released, the vehicle is tracked and detonated remotely when it reaches a suitable spot.
Meanwhile, Turkish security forces also arrested two YPG terrorists while they were trying to enter Turkey from Syria, a security source said Monday. The source said the terrorists, who had come from the Ayn al-Arab district of Syria, were arrested by Turkish gendarmerie forces in southeastern Şanlıurfa province while they were trying to cross the border.
Turkey is determined to clear all YPG terrorists from the region, and it may even relaunch Operation Peace Spring if needed. Regarding the issue, Foreign Minister Mevlüt Çavuşoğlu said on Monday that the country is ready to launch an operation in the region unless the area is cleared of YPG terrorists.Highlighting that neither the United States nor Russia have done what was required under agreements that paused Operation Peace Spring, the foreign minister urged the allies to keep their promises.“Have they fulfilled what was necessary under the agreements? No, they have not until now. But they should," Çavuşoğlu said, adding that if not, Turkey will do whatever is necessary as there is no other option for the country but to eliminate all terrorists from the region."We should definitely clear the terror threat just next to us (in northern Syria)," the foreign minister emphasized.
Last Update: Dec 20, 2019 1:47 am
RELATED TOPICS