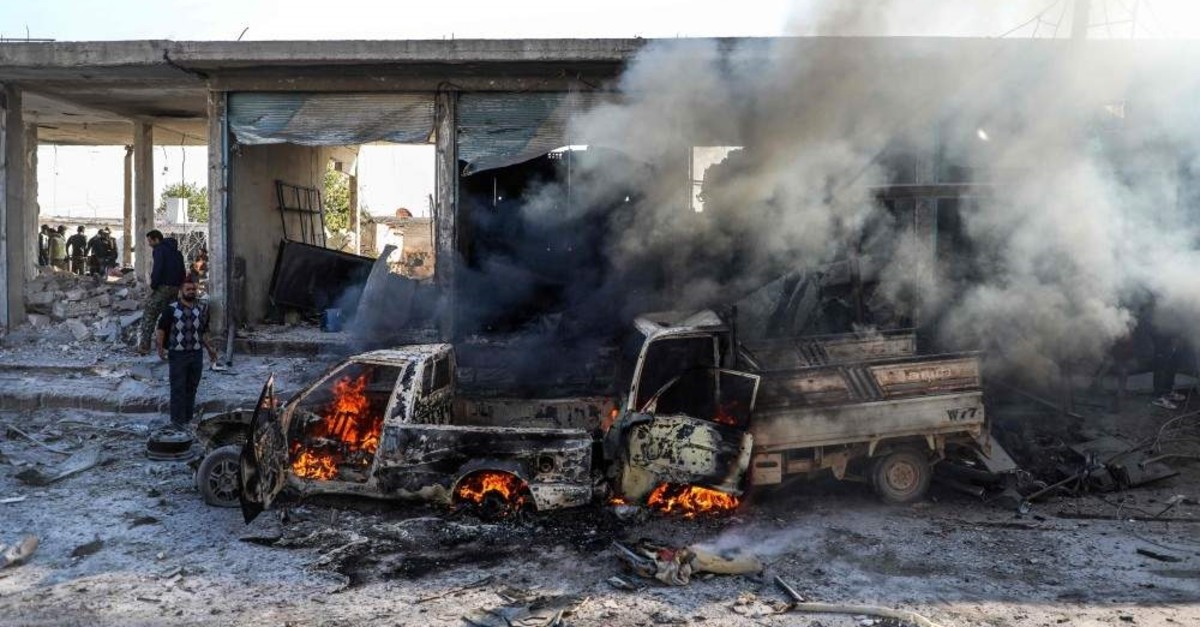 This picture taken on November 23, 2019 shows the aftermath of a car bomb explosion at the industrial zone in the northern Syrian town of Tal Abyad, on the border with Turkey. (AFP Photo)
by Compiled from Wire Services Nov 23, 2019 1:56 pm
At least three civilians were killed and 20 others wounded in a car bomb attack staged in the northern Syrian town of Tal Abyad by the PKK-linked People's Protection Units (YPG) terrorist organization, Turkey's Ministry of National Defense said Saturday.
"The PKK/YPG terror organization, which is no different from Daesh, continues to slaughter innocent civilians," the ministry said in a tweet.
It added that "baby-killer terrorists" attacked civilians at work in an industrial area of the Tal Abyad district using a bomb-laden vehicle, killing three and injuring 20 others, according to initial reports.
The blast was heard across the border, in the town of Akçakale in the Turkish border province of Şanlıurfa. The wounded, some in critical condition, are being treated at the state hospital located in Akçakale town center. The Syrian Observatory for Human Rights claimed that at least nine people, including four civilians, were killed and 22 others were injured in the blast.
"Today's explosion bears all the hallmarks of the YPG. In typical fashion, an explosive-laden car was parked on a main street and detonated by remote control," a commander in the Turkey-backed Syrian National Army (SNA) told dpa.
Turkey’s Defense Ministry later said that Turkish security forces have responded to harassment and attacks carried out by YPG/PKK terrorists.
"Within the scope of self-defense, the required response was given to the harassment/attacks that the terrorist organization PKK/YPG carried out with mortars and artillery shots against our elements in the south of Tal Abyad," the ministry said in a Twitter post.
Earlier reports claimed that the blast killed some 15 people, mostly civilians waiting in line at a bakery. Meanwhile, a convoy of 30 trucks carrying medical supplies, food and clothing was also dispatched to Tal Abyad shortly after the blast.
On Oct. 9, Turkey launched Operation Peace Spring to eliminate terrorists from northern Syria, east of the Euphrates River in order to secure Turkey’s borders, aid in the safe return of Syrian refugees, and ensure Syria’s territorial integrity.
Ankara has reached two separate deals with the U.S. and Russia to pause the operation in order to allow YPG/PKK terrorists to withdraw from a planned safe zone, where Turkey wishes to repatriate refugees.
Over the course of its 30-year campaign of terror against Turkey, the PKK -- listed as a terrorist organization by Turkey, the U.S. and the European Union -- has been responsible for the deaths of 40,000 people, including women, children, and infants. The YPG is the PKK’s Syrian offshoot.
Last Update: Dec 20, 2019 1:52 am
RELATED TOPICS