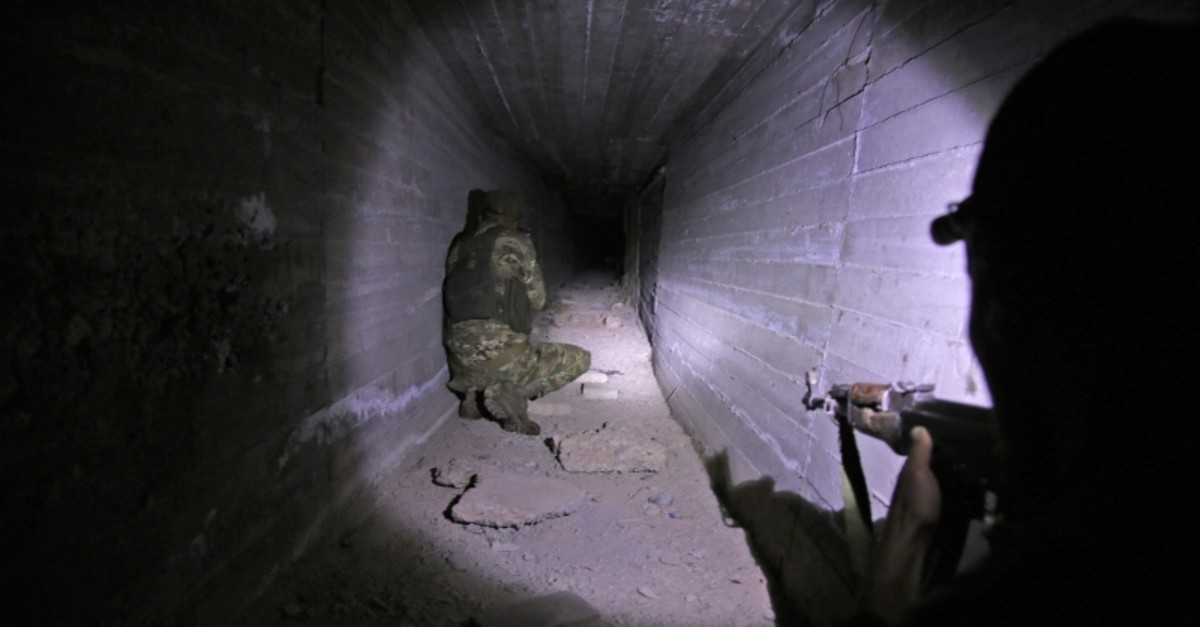 | Turkish-backed Syrian fighters inspect a tunnel, said to have been built by Kurdish fighters, in the Syrian border town of Tal Abyad, on October 21, 2019. (AFP Photo)
by Anadolu Agency Nov 25, 2019 2:18 pm
Turkish security forces have seized weapons and ammunition belonging to the PKK terror group and its Syrian offshoot the People's Protection Units (YPG), and have discovered a new tunnel network used by the terrorists in the east and north of Syria
.
As part of ongoing anti-terror operations to find the PKK/KCK terror group's shelters, gendarmerie forces seized two Kalashnikov infantry rifles and some ammunition in eastern Van province's Sözveren district, said the Governor’s Office in a statement Monday.
Meanwhile, the military discovered another tunnel network in the northern Syrian town of Ras Al-Ayn, which was recently liberated from the YPG/PKK terrorist group as a part of the Turkish-led Operation Peace Spring.
"During search and sweep operations by our heroic soldiers in Ras al-Ayn, a new tunnel network belonging to the PKK/YPG terrorist group was discovered," the Turkish Defense Ministry said in a statement on Twitter.
The ministry also shared photos of the newly-discovered tunnel.
YPG/PKK terrorists dug the tunnels to flee the approaching Turkish troops and to infiltrate and ambush them.
Similar tunnels were discovered in Afrin, northern Syria by the Turkish army after its villages were cleared of terrorists by the Turkish-led Operation Olive Branch and Operation Peace Spring.
Since 2016, Turkey has carried out three successful operations in northern Syria against YPG/PKK terrorists and Daesh: Operation Euphrates Shield (2016-17), Operation Olive Branch (2018), and Operation Peace Spring (2019).
Operation Peace Spring was launched on Oct. 9 to eliminate the YPG/PKK from northern Syria east of the Euphrates River in order to secure Turkey's borders, aid in the safe return of Syrian refugees, and ensure Syria's territorial integrity.
Ankara and Washington reached a deal on Oct. 17 to pause the operation for 120 hours to allow the withdrawal of YPG/PKK terrorists from a planned northern Syria safe zone.
On Oct. 22, Turkey also reached an agreement with Russia to allow the YPG/PKK terror group to withdraw from the safe zone.
Turkey wants to repatriate some two million Syrian refugees it is currently hosting to the zone after clearing it of terrorists.
In its more than 30-year terror campaign against Turkey, the PKK – listed as a terrorist organization by Turkey, the U.S. and the European Union – has been responsible for the deaths of over 40,000 people, including women, children, and infants.
Last Update: Dec 20, 2019 1:55 am
RELATED TOPICS