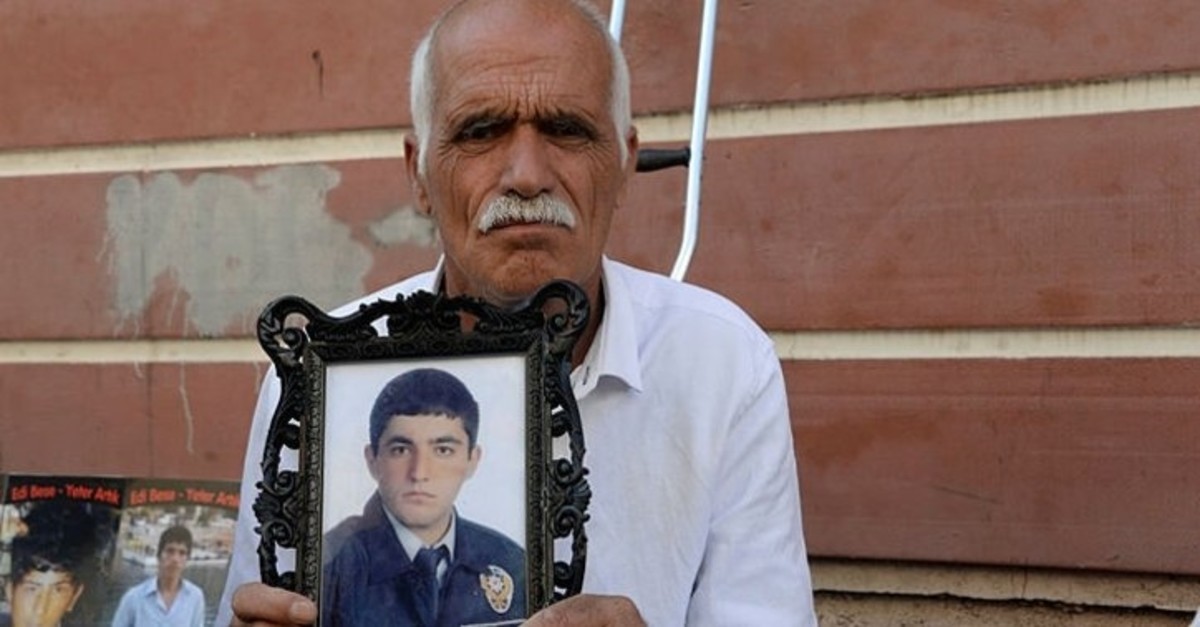 With the heavy burden of sorrow and resentfulness, grief-stricken mothers, fathers, partners, siblings, and friends have entered the 90th day of the ongoing sit-in protest outside the offices of the pro-PKK Peoples' Democratic Party (HDP) in the southern city of Diyarbakır.
Adding to the woes of the HDP, one father among the countless protesting families, Şeyhmus Kaya, claimed over the weekend that the HDP provincial head of Lice Murat Atagün himself abducted his son.
Vehemently underling that his son was abducted by the HDP, Kaya said, “They [the HDP] abducted my son, I know for certain. I went to Lice and HDP’s alleged Lice co-head Murat Atagün told me exactly this, ‘I abducted your son, I will use him as leverage.’ Murat Atagün and two deputies are doing this.”
The sit-in protest is being staged against the outlawed PKK, a terrorist group that has been caught red-handed abducting and recruiting children, as well as the HDP, a political party that aligns itself heavily with the PKK. The protest has continued since Sept. 3, with 57 families in total currently protesting, including five Iranian families whose children were abducted by the PKK's Iranian wing, the Kurdistan Free Life Party (PJAK).
Kaya, a resident of Derik, in the southeastern province of Mardin, is attending the protest in the hope of reuniting with his 28-year-old son Vedat Kaya, who was abducted by terrorists and taken to Diyarbakır’s Lice district while on his way back from his brother’s wedding in Muş.
His father, Şeyhmus Kaya, who was a police officer in Istanbul at the time, is now determined to continue his protest of the HDP along with many others.
“They block roadways and abduct people between 6 p.m. and 6 a.m. They took my child from right in front of the police station. However, [Gülenist Terror Group] FETÖ soldiers did not even intervene,” stated Kaya on Saturday, explaining that his other son went to the police to report that his brother was abducted with a vehicle belonging to the government. Kaya stated that those on duty told his son that they had been no orders for an operation.
Claiming terrorists vandalized a home he owns in Derik after seeing him at the sit-in, Kaya has filed several complaints and even went to the Lice public prosecution office to make his opposition known.
“The gendarmerie called me yesterday. A tenant would be scared to even enter that house, and I want to sell it but there are terrorist sympathizers around all the time. Nobody should live there,” Kaya continued.
Another family member attending the protest, Muhittin Avunan, criticized the HDP for running away. “We have been here for 90 days. We've known for 40 years that the PKK and HDP are a terrorist organization. We know they have been bleeding Kurds dry. When someone knocks, you ask them why they have come. These [HDP] ran away. We know they will not give our children back,” he said.
Avunan is protesting for the return of his nephew, Emrah Avunan, who was abducted while going to the army. The father explained that they could not reach him for four months and that they went everywhere for help.
“We went to HDP member Idris Baluken in Ankara. After making a phone call, he told us that the PKK took our child. He could have brought him back just with a call,” Avunan stated.
Claiming that they had later gone to Şırnak’s Cizre district to visit the HDP building there, Avunan said that HDP officials told them that they had taken the child.
“We begged them and told them we are also Kurds and that the child is a Kurd – upon this, they just responded that the organization took everyone they gathered to the mountains,” Avunan said.
The protest started when Hacire Akar turned up at the doorstep of the HDP's Diyarbakır office one night. A week later, on Sept. 3, 2019, families inspired by Akar transformed her solo display into a collective sit-in protest. Akar's son Mehmet returned home on Aug. 24, showing people that there is still hope.
The HDP, long facing public reaction and judicial probes over its ties to the PKK, is under pressure due to this growing civilian protest movement launched by mothers and local families. Meanwhile, various groups from all around Turkey have supported the Kurdish mothers in their cause, with many paying visits to show their support. The HDP is also known for encouraging young people to join the terrorist organization. That is to say, children abducted by the PKK are first radicalized by the HDP. The would-be recruits are then used as an instrument for propaganda and are forced to work. Specialists define four stages of radicalization, the first of which is brainwashing, thereby encouraging the young to join the terrorist organization. This is followed by the armament, violation and finally, leaving to join the organization in the mountains.
The PKK has been involved in a 30-year campaign of terror against Turkey. The terrorist organization is responsible for the deaths of some 40,000 people, including women, children, and infants.