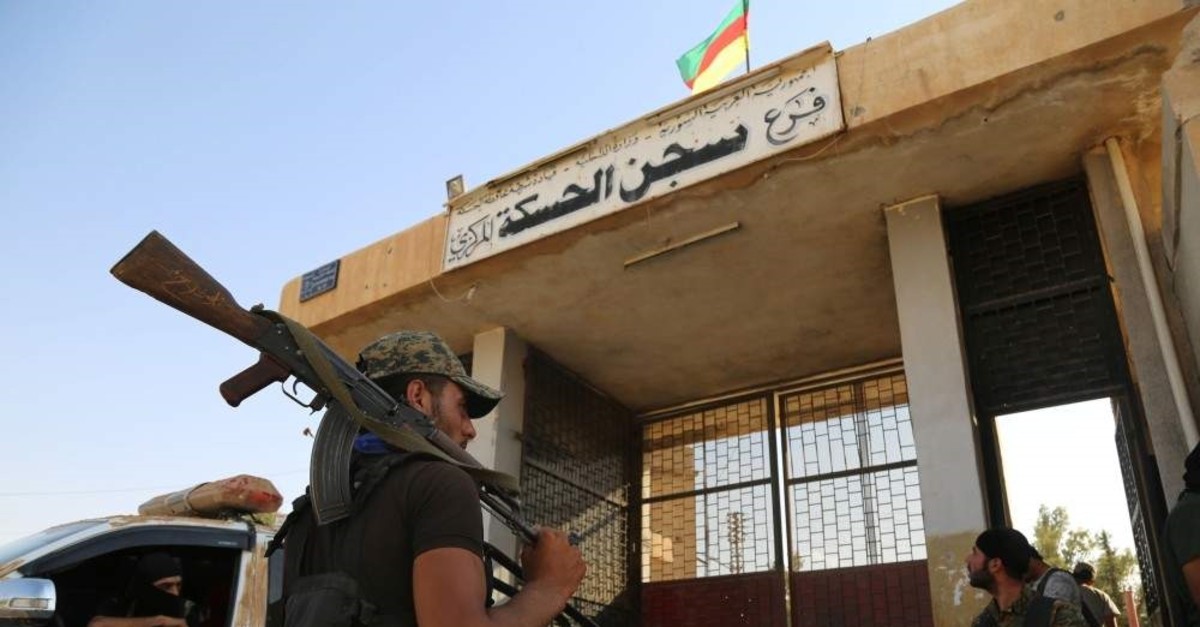 YPG terrorists stand outside the central prison of the northeastern Syrian city of Hasakeh on Aug. 23, 2016 after they agreed to a truce with regime forces (AFP File Photo)
by Daily Sabah with Agencies Dec 02, 2019 10:30 am
One of the main factors contributing to the chaos and the existence of Daesh east of the Euphrates is the PKK’s Syrian offshoot, the People’s Protection Units (YPG), which cooperates with them, the Defense Ministry said Sunday.
In a statement posted on Twitter, the ministry said support and assistance provided to the YPG only creates chaos in northern Syria.
Referring to YPG terrorists releasing Daesh prisoners from Syria’s Tal Abyad prison, the ministry said Turkey is taking all the necessary precautions against Daesh terrorists and is carrying out operations while coordinating and cooperating with coalition members.
In October, YPG terrorists deliberately released hundreds of Daesh prisoners being held in a camp near the town of Ayn Issa.
The overall number of Daesh terrorists released by the YPG is said to be close to 750. Of these, 265 have surrendered and are now under the control of the Turkish Armed Forces (TSK).
“Terrorist organizations like Daesh and the PKK/YPG serve the same purpose and aim to harm NATO by attacking Turkey, which is a NATO ally,” the ministry said, adding that Turkey will overcome problems through its experience in the creation of a safe zone, with its strength, a humanitarian approach and concrete projects.
The ministry noted that Turkey has greatly contributed to the fight against Daesh and is the only NATO member that was directly involved in the fight, killing at least 3,000 Daesh terrorists in Operation Euphrates Shield.
Since 2016, Turkey has carried out three major military operations in northern Syria – Euphrates Shield, Olive Branch and Peace Spring – with the aim of purging the region of terrorist groups. Turkey launched Operation Peace Spring on Oct. 9 to clear the east of the Euphrates River in northeastern Syria of terrorists and to create a safe zone along the border, in turn paving the way for the voluntary return of Syrian refugees.
Ankara has repeatedly expressed its determination to clear northern Syria of both Daesh and PKK-linked terrorist groups.
Since 2016, Turkey's Euphrates Shield and Olive Branch operations in northwestern Syria have liberated the region from YPG/PKK and Daesh terrorists, facilitating the return of 400,000 Syrians who fled the region amid terror threats.
"Significant intelligence was gathered from the close relatives of [Abu Bakr] al-Baghdadi who have been captured. The YPG has released thousands of Daesh members held in Syria's prisons as a means of blackmail," President Recep Tayyip Erdoğan said during a speech in Parliament to his ruling Justice and Development Party (AK Party) two weeks ago, indicating that it is obvious that some circles in the U.S. are trying to support separatist terrorist groups in Syria.
Ankara has long objected to the U.S.' support for the YPG, a group that poses a threat to Turkey and terrorizes local people, destroying their homes and forcing them to flee. The YPG is the Syrian offshoot of the PKK, which has killed 40,000 people, including women and children, in its more than 30-year terror campaign against Turkey. Under the pretext of fighting Daesh, the U.S. has supported the YPG terrorist group by providing military training and weapons and has recently reiterated its ongoing support. While underlining that one cannot support a terrorist group in the fight against another, Turkey has continued its own counterterrorism operation, over the course of which it has managed to remove a significant number of terrorists from the region.
Nevertheless, the U.S. continues providing support to the terror group and one of its leaders, Ferhat Abdi Şahin – also known by his nom-de-guerre Mazloum Kobani – despite U.S. President Donald Trump having been shown evidence of the group's crimes and a Red Notice being issued in Şahin's name by Interpol. Şahin has caused the deaths of hundreds of Turkish people through his work for the PKK. Abdullah Öcalan, the jailed leader of the PKK terrorist organization, was like a father figure to him and acted as his mentor ever since he joined the group in 1990.
Turkey to repatriate 200 Daesh terrorists
Meanwhile, 200 Daesh terrorists whose country of origin was determined, will be sent to their countries or any third country of their choice. Currently, there are 938 foreign terrorist fighters in Turkey’s repatriation centers that are EU citizens. The deportation process in this regard started on Nov. 11.
Turkey has voiced for a long time that returning foreign fighters to their respective countries could be the best possible solution among other unfavorable options. With their return to the EU, the citizens would be taken under control and prosecuted thus prevented from being further radicalized in camps with poor conditions.
The first former Daesh terrorists to be repatriated from 28 centers in 23 provinces, were of German, Danish and U.S. origin. The U.S. citizen had demanded to be sent to Greece, yet had been left in a buffer zone when the country did not accept him. After the U.S. citizen, foreign terrorist fighters of Germany, the U.K., the Netherlands and Belgium were sent back, followed by an Irish citizen who was the last one. Since Oct.11, 21 former terrorists were deported, according to the Interior Ministry. The process, carried out by the Interior, Justice and Foreign Ministries, will proceed in the following days.
According to the daily Yeni Şafak, apart from repatriation centers, there are 1,172 former Daesh terrorists in Turkish prisons, 750 of whom are foreigners.
Interior Minister Süleyman Soylu announced on Nov. 28 in Izmir that 11 French former Daesh terrorists would be sent to France at the beginning of December.
Moreover, Turkey also prevented 8,922 foreign terrorist fighters from entering the country from 2016 to 2019.
Last Update: Dec 20, 2019 2:04 am
RELATED TOPICS