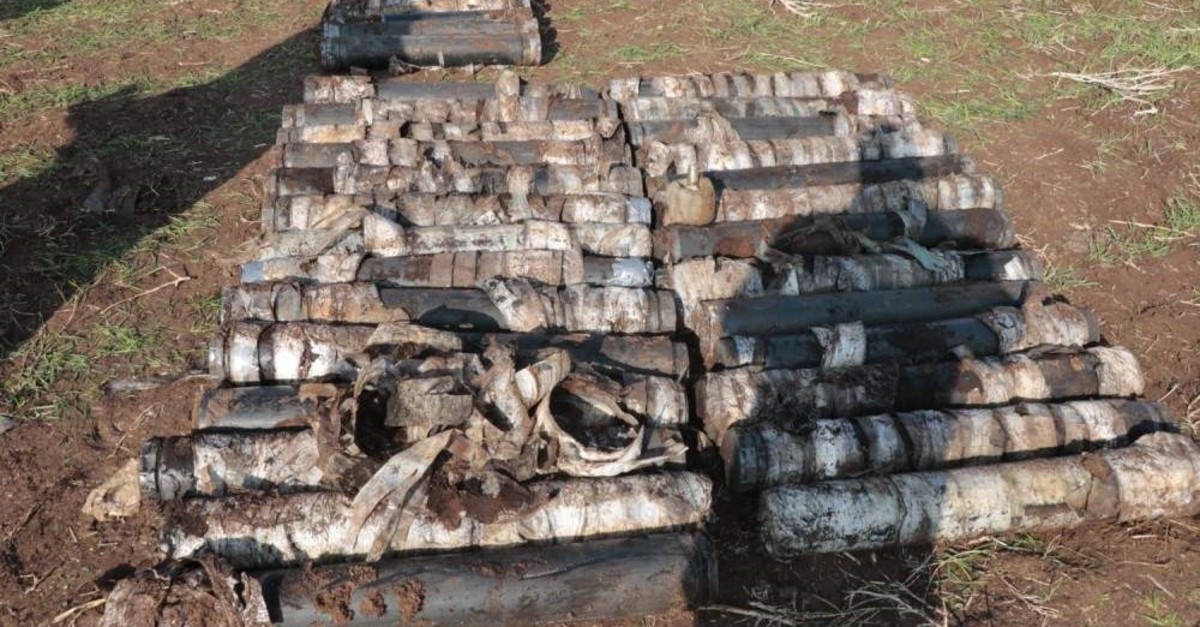 | AA Photo
by Daily Sabah Dec 09, 2019 10:36 am
Security forces confiscated one of the largest caches of the PKK terrorist organization's ammunition in a hideout filled with explosives, rocket launchers and bombs in an air-backed, counter-terror operation in Turkey's southeastern Diyarbakır province.

Anti-terror squads discovered the ammunition depot in a hideout under an empty plot of land, reports said.

Around 100 kilograms of plastic explosives, 100 rocket launchers, 47 rockets, rifles, hand grenades, weapons, ammunition and other supplies used by the terrorists were discovered, while 20 suspects were detained in the operation.

Police also confiscated two computers, 17 cell phones and other equipment in simultaneous raids carried out in the districts of Bağlar, Çınar and Kayapınar.

The cache was reportedly the largest confiscated since the terrorist organization's urban warfare destroyed Diyarbakır's Sur district in 2016.

The terrorists were reportedly planning to carry out attacks in Turkey.

Security forces are trying to figure out the origins of the supplies.

Sur was one of a series of towns and neighborhoods targeted in counterterrorism operations to root out the PKK.

Turkey has been criticizing the U.S. for providing military supplies to the PKK's Syrian offshoot, the People's Protection Units (YPG), while listing the PKK as a terrorist group.

The PKK carried out terrorist attacks using explosives supplied by the U.S. to the YPG in Syria.

Turkish security forces regularly conduct counterterrorism operations in the eastern and southeastern provinces of Turkey, where the PKK has attempted to establish a strong presence and bases. The PKK, which is listed as a terrorist organization by Turkey, the U.S. and the EU, resumed its armed campaign in July 2015 after a brief reconciliation period.
Last Update: Dec 27, 2019 10:23 am
RELATED TOPICS