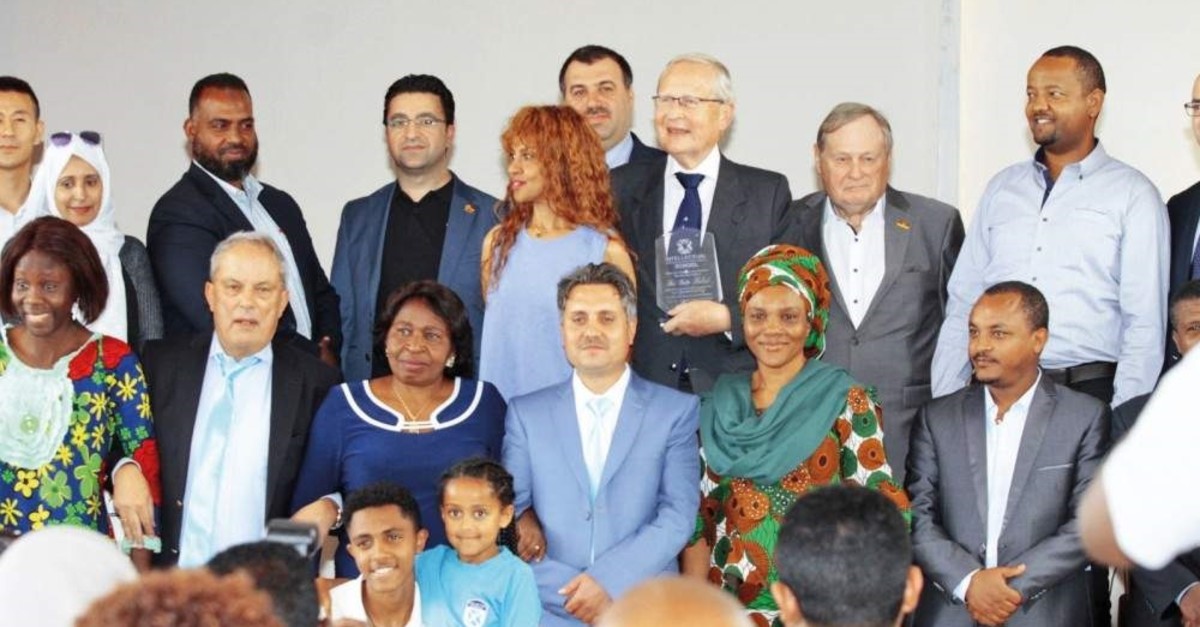 FETu00d6 officials and their partners attend the opening ceremony of the school in Addis Ababa.
by Daily Sabah Dec 10, 2019 1:21 pm
The Gülenist Terror Group (FETÖ), responsible for carrying out a deadly coup attempt in Turkey and subsequently forced to transfer control of its private schools in Ethiopia to a Turkish foundation, has managed to open a new school in the country with its German partners, reports said Tuesday.
Intellectual Schools, which were previously administered by FETÖ, opened a new campus in Addis Ababa after transferring control of the schools to Germans.
FETÖ’s so-called "imam" of Germany, Ercan Karakoyun, who has an outstanding arrest warrant in Turkey, and German partners with close ties to the German Embassy attended the opening ceremony of the school, reports said.
They reportedly transferred the administration of Intellectual Schools to the Germans on paper and opened a new campus with a 1,200 student capacity in the district of Ferensay.
German flags were seen at the opening ceremony.
The terrorist group allegedly chose this path to avoid diplomatic pressure from Turkey.
Turkey has been trying to pursuing a legal battle against FETÖ schools abroad, which disseminates false information about the country and exploits funds to carry out a defamation campaign.
FETÖ schools in Ethiopia had been set up using donations collected for charitable purposes, violating Ethiopian law, which rules that the assets of charitable trusts cannot be transferred to private firms.
Since 2017, Turkey has taken control of some schools run by FETÖ in Ethiopia, but the terrorist group managed to retain control of six schools thanks to obscure deals with German expats and so-called investors in Ethiopia.
The East African country is significant as the terrorist group unlawfully transferred some of its staff from schools closed in Pakistan and other places to Ethiopia.
Karakoyun is reportedly one of the senior figures responsible for the terrorist group’s activities in Europe. While evaluating asylum applications of FETÖ members, Karakoyun facilitates the acquisition of permanent residency.
He had previously referred to Germany as the new headquarters of the terrorist group and visited Green Party co-Chair Cem Özdemir, who introduced a resolution to recognize the 1915 events as “genocide,” and told him that they are in solidarity with Özdemir.
FETÖ has a considerable presence abroad, particularly in the U.S., where it runs a chain of charter schools that serve as a revenue stream for the terrorist group.
The U.S. is home to a large community of Gülenists, including the group's leader Fetullah Gülen, who has lived in a self-imposed exile on a secluded compound in the U.S. state of Pennsylvania since 1999.
The number of FETÖ-affiliated schools in 35 African countries was estimated at more than 100 prior to the takeover of some by Turkey's Maarif Foundation. The first school in Africa opened in Tangier in 1994.
Relations between the two NATO allies hit a new low following a failed coup in 2016. Ankara has criticized Berlin for not handing over suspects linked to FETÖ for their role in the failed coup that killed 250 people and injured 2,200 others.
A top coup perpetrator, Adil Öksüz, who disappeared following the failed coup attempt, is also believed to be in Germany.
During the campaign period ahead of the April 16, 2017 referendum in Turkey and ahead of the June 24 presidential and parliamentary elections, German authorities made a controversial decision and barred the Justice and Development Party (AK Party) from holding political rallies in Germany over security concerns but allowed others to the campaign.
Last Update: Dec 20, 2019 2:17 am
RELATED TOPICS