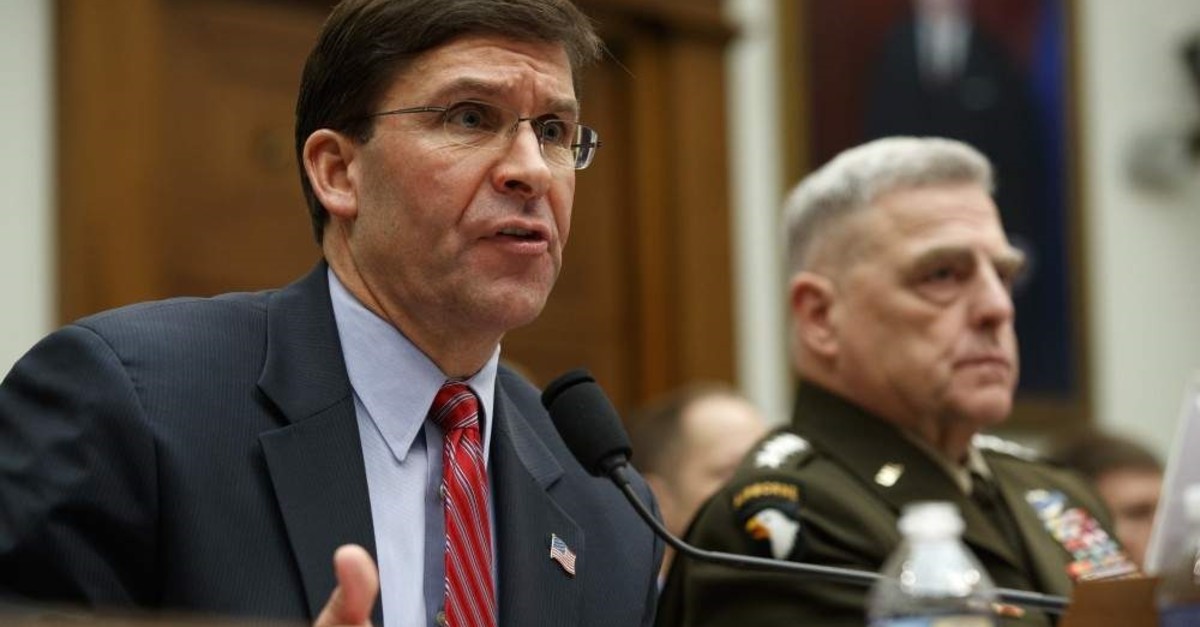 Secretary of Defense Mark Esper (L) and Chairman of the Joint Chiefs Gen. Mark Milley testify at a House committee hearing on U.S. policy in Syria, Dec. 11, 2019, Capitol Hill, Washington. (AP Photo/Jacquelyn Martin)
by Daily Sabah Dec 12, 2019 4:09 pm
U.S. Defense Secretary Mark Esper stated that Turkey’s recent operation in northern Syria stabilized the area. Speaking to the House Armed Services Committee alongside Joint Chiefs of Staff Chairman Gen. Mark Milley on Wednesday, Esper made assessments on the current situation in Syria and their cooperation with the PKK terrorist group's Syrian affiliate, the People's Protection Units-led (YPG) Syrian Democratic Forces (SDF).
“Fighting a longstanding ally (Turkey) was not part of our commitment with the SDF,” Esper said, adding that the commitment with the Kurds was to destroy Daesh but any future commitment requires a broader political framework.
The defense secretary further pointed out that the U.S. did not promise to help the SDF establish an autonomous Kurdish state.
Saying that no cease-fire is perfect, Esper stated that Turkey’s “buffer zone,” created following Ankara’s Operation Peace Spring, had stabilized northern Syria.
As part of two separate deals with the U.S. and Russia, Turkey paused the operation to allow the withdrawal of YPG terrorists from the planned northern Syria safe zone.
Turkey launched Operation Peace Spring on Oct. 9 to eliminate the YPG from the area east of the Euphrates in northern Syria to secure Turkey's borders, aid in the safe return of Syrian refugees and ensure Syria's territorial integrity.
Esper also mentioned that the U.S. had tried to “set up the security mechanism” to try to address Turkey’s legitimate security concerns with regard to the PKK, “but clearly they [Turkey] are very concerned about this and have decided that they've reached a point where they could not accept it anymore.”
Speaking on Turkey’s operation on northern Syria, Esper stated: “Clearly, President Erdoğan felt the need at this point in time, as I said earlier, since the beginning of this relationship between the United States and the YPG, and later, the SDF under the Obama administration. This has been a long-standing concern, a thorn in the side of Turkey's, and I guess they decided it was time to act.”
Esper and Milley also voiced that the U.S. would continue to cooperate with the SDF, a long-standing strain in bilateral relations, while the defense secretary also mentioned that Turkey-Russia relations were concerning and Turkey was "moving out of the NATO orbit.”
On the other side, stating his belief that both countries have a strong enough relationship to put ties back on track, U.S. Air Forces in Europe Cmdr. Tod Wolters said on Tuesday, "The mil(itary)-to-mil(itary) convergence far outweighs the mil(itary)-to-mil(itary) divergence with the U.S. and Turkey and with NATO and Turkey.”
Referring to talks with Turkish officials during the recent NATO meeting in London, "I saw no cracks in the armor in Turkey's willingness to work side by side as a NATO partner with us," the top-ranking U.S. general in Europe added.
"The United States strategy in the Middle East seeks to ensure the region is not a safe haven for terrorists, is not dominated by any power hostile to the U.S. and contributes to a stable global energy market," Esper said.
Turkey has long been fighting to eradicate the presence of terrorist groups in the region, conducting three cross-border operations in northern Syria – Operation Olive Branch, Euphrates Shield and most recently Peace Spring.
Following the liberation of areas in northern Syria, efforts to clear bombs and improvised explosive devices were launched and administration duties were given to local councils. According to U.N. figures, 60% of the people who had been displaced due to the war have returned to their homes. Turkish humanitarian aid groups and institutions have provided help for over 30,000 people so far. Turkey's operation also did not hinder the humanitarian aid of other countries and more than 80% of U.N. aid for Syria has crossed through Turkey.
Last Update: Dec 20, 2019 2:20 am
RELATED TOPICS