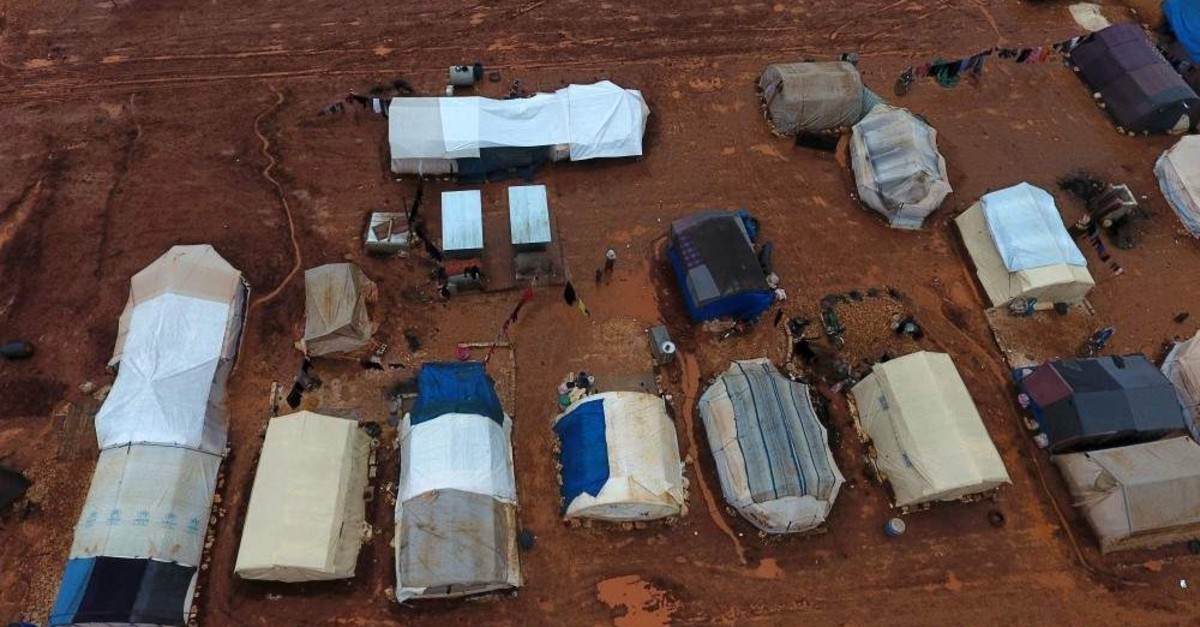 An aerial photograph shows tents sheltering Syrians who fled ongoing battles in the southern and eastern countryside of the Idlib province, surrounded by mud caused by heavy rain, in a camp for displaced people near Sarmada near the border with Turkey in the northern part of the province, Dec. 29, 2019. (Photo by Aref TAMMAWI / AFP)
by Daily Sabah with AA
Dec 30, 2019 6:05 pm

As Idlib is on the edge of a new humanitarian crisis due to the regime's violent attacks targeting residential places, the EU called on Damascus to stop violence

The European Union has called on the Bashar Assad regime and its backers to halt its attacks on Syria's northwestern Idlib.

"The latest offensive includes indiscriminate airstrikes on and shelling of civilians and escape routes," a statement by the spokesperson of the EU's foreign affairs service said Sunday.

The EU's statement came after the regime intensified its attacks on civilians and residential places in the de-escalation zone in mid-December, causing a new humanitarian catastrophe and forcing civilians to flee their homes toward safer areas near the Turkish border.

"It has already led to countless civilian deaths, injuries and the displacement of 80,000 people. This means close to 800,000 people have been displaced since February this year," it said.

"The regime and its allies must cease indiscriminate military attacks and respect international humanitarian law," it added.

Turkey on Monday sent a delegation to Moscow led by Turkish Deputy Foreign Minister Sedat Önal for talks on the Idlib issue, after President Recep Tayyip Erdoğan said Ankara cannot handle a new refugee flow on its own.

Turkey and Russia agreed last September to turn Idlib into a de-escalation zone in which acts of aggression are expressly prohibited. Since then, more than 1,300 civilians have been killed in attacks by the regime and Russian forces in the de-escalation zone as the cease-fire continues to be violated. Over a million Syrians have moved near the Turkish border following intense attacks.

The EU said that fighting U.N.-listed terrorist groups in Idlib "does not permit the undermining of international humanitarian law or the targeting of civilians."

20,000 refugees fled toward the border

Amid the ongoing clashes in Idlib, a further refugee wave occurred within the past 48 hours when 20,000 civilians fled toward the Turkish border in addition to the already existing migrant groups on their way. According to Mohammed Hallaj, head of the Response Coordination Group in Idlib who spoke to Anadolu Agency, 284,000 people were displaced in the past month. If the attacks of the Syrian regime on Idlib's southern districts continue, it is expected that another 250,000 could be displaced.

Regime forces launched a wide ground offensive last week into Idlib. The offensive follows weeks of bombardment that has displaced tens of thousands of people.

The United Nations estimates that some 60,000 people have fled the area, heading south, after the bombings intensified earlier this month. Thousands more have fled further north toward the Turkish border in recent days, where the U.N. has warned of the growing risk of a humanitarian catastrophe. Idlib, home to around 4 million people, is the last opposition enclave in Syria.

More than 40 villages and hamlets have come under regime control in the southern parts of Idlib.

A mosque found in the city-center of Idlib, around 40 kilometers from the Turkish border, has been the last resort for people fleeing the bombings and shelling. The mosque is currently home for 49 families struggling to survive, lacking food and clothing. The Turkish Red Crescent (Kızılay) is providing blankets and food while the civilians in the mosque pray for the attacks to stop.

"We could not sleep due to continuous conflict and airstrikes; now we cannot sleep due to the cold. All our children have fallen sick," Selva Şerafettin, a Syrian in the mosque told an Anadolu Agency reporter. Her husband Abdullah pointed out that they came nine days ago together with six children.

Another refugee coming from Idlib's Maarat al-Numan district, which is one of the Assad regime's main targets, has also sought refuge in the mosque. "We are in God's house, in the most beautiful place. There cannot be somewhere safer," Reyhan Ahey said.
Last Update: Dec 31, 2019 12:58 pm