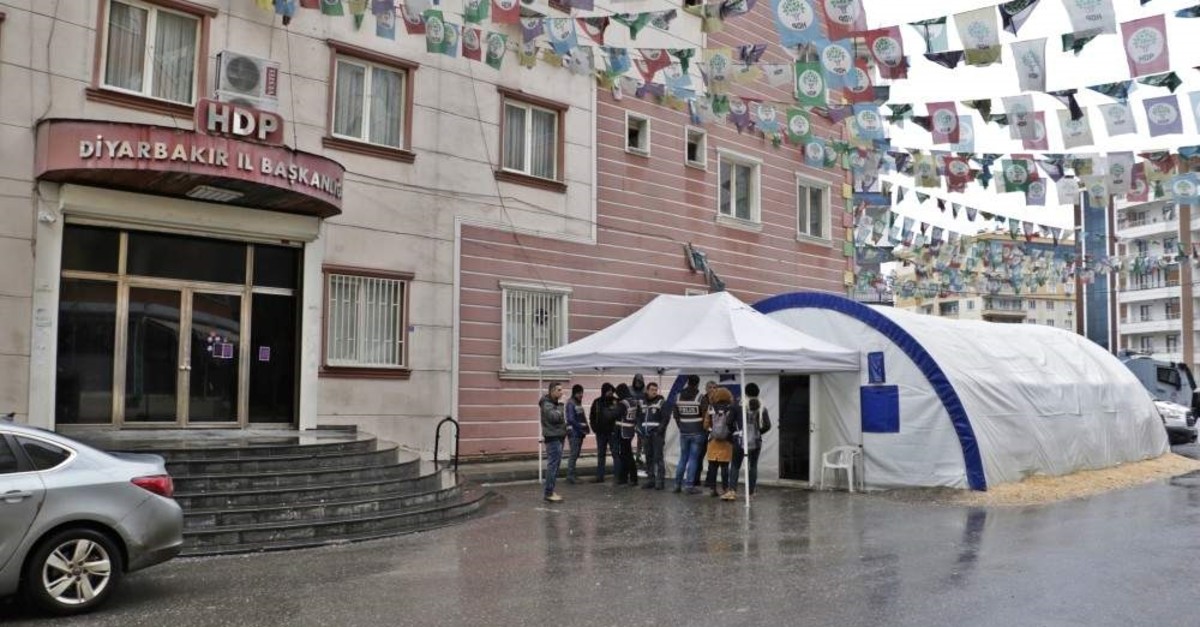 This file shows entrance of HDP's Diyarbaku0131r headquarters, where some 50 Kurdish mothers are staging a sit-in protest against PKK terrorist group for abduction of their sons. (DHA File Photo)
by Daily Sabah with AA Dec 30, 2019 11:44 am

The pro-PKK Peoples' Democratic Party (HDP) used its offices to recruit terrorists for the PKK terrorist organization, and is constantly in touch with them, Interior Minister Süleyman Soylu said.

"They used their provincial headquarters as recruitment centers for the terrorist organization and we've seen how they used the municipalities they governed," Soylu said in a live interview with CNN Türk Sunday, noting that the party had previously mobilized everything in its power, including scoops and construction equipment to help the PKK dig ditches in eastern Turkey.

Its mayors have also been accused of undermining municipal services, allowing the PKK to dig ditches on the streets and launch attacks on police and soldiers when the terrorist group adopted an urban warfare strategy in July 2015 and ended a two-year reconciliation period. HDP municipalities and their staff were also found to be actively participating in terrorist attacks launched after July 2015.

"I commissioned an inspector and an auditor to analyze this and found out that the Diyarbakır Metropolitan Municipality, Silvan Municipality and others sent funds to the football team right after Bayık's statements," Soylu said, adding that the connection cannot be ignored.

The HDP, long facing public reaction and judicial probes over its ties to the PKK, is under pressure due to the growing civilian protest movement launched by mothers and local families.

"We have sent 778 foreign terrorist fighters back to their countries of origin since the beginning of the year," Soylu said.

Soylu did not mention whether all of them were linked to the Daesh terror group.

There are some 1,200 foreign Daesh members being held in Turkish prisons and nearly 300 were held in Turkey's current anti-terror operation in northern Syria, including relatives of Daesh members, Soylu announced on Nov. 4.

Ankara continues to deport foreign terrorists to their countries of origin.

The issue of the handling of Daesh members and their families detained in Syria – including foreign members of the terror group – has been controversial, with Turkey arguing that foreign-born terrorists should be repatriated to their countries of origin while several European countries have refused, saying the terrorists were denationalized.

Since recognizing Daesh as a terror group in 2013, Turkey has been attacked by the group numerous times, including 10 suicide bombings, seven bombings and four armed attacks which killed 315 people and injured hundreds.

In response to the attacks, Turkey launched anti-terror operations at home and abroad, neutralizing 3,500 Daesh terrorists and arresting 5,500.

Turkey has been fighting narcoterrorism and this year confiscated more than 40 tons of marijuana.

On the number of Syrians in Turkey's largest city, Soylu said around 474,679 Syrians live in Istanbul while nearly 100,000 unregistered Syrians were sent elsewhere.

"We granted citizenship to 110,000 Syrians. Of these, 53,000 were adults and 57,000 were children," he said, adding mainly profession holders such as teachers, doctors, engineers, business people and scientists were among those given Turkish citizenship.

Soylu said around 445,000 irregular migrants were held in Turkey in 2019. He blamed Western countries for the migrant wave, without elaborating.

A total of 105,000 irregular migrants were sent back to their home countries, he said, adding the number was around 68,000 last year.

Since the eruption of the bloody civil war in Syria in 2011, Turkey has taken in some 3.7 million fleeing Syrians, making it the world's top refugee-hosting country.