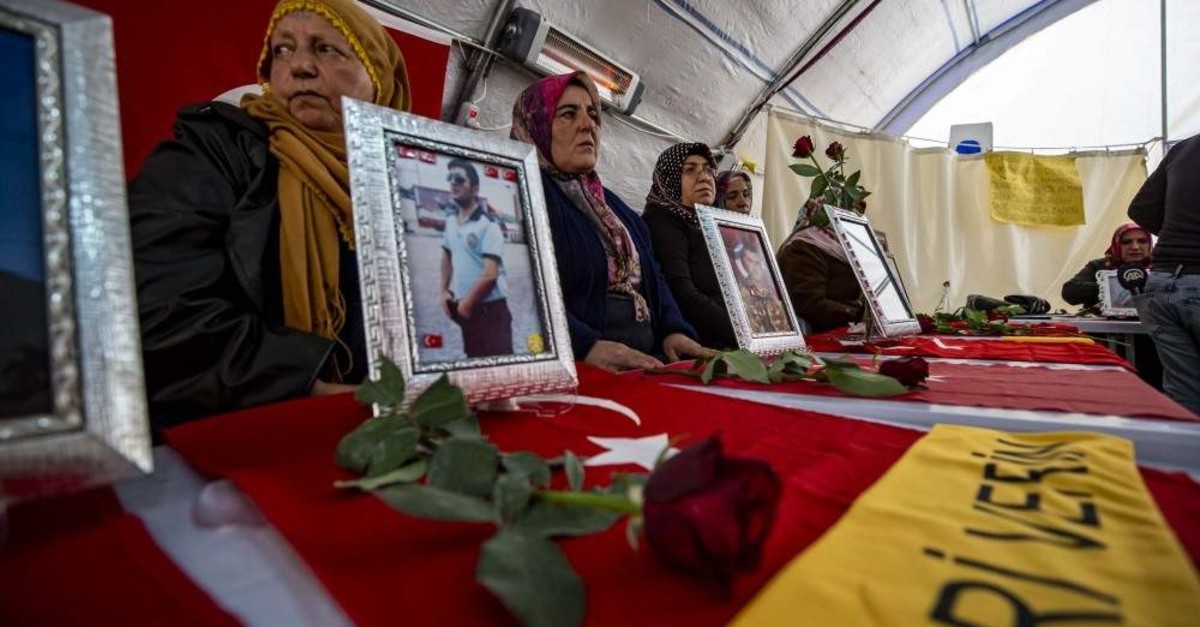 Diyarbak?r mothers protest with the hope of rejoining their children for 120 days in front of the HDP provincial building ( Hasan Naml? - Anadolu Ajans? )
by Daily Sabah Dec 31, 2019 4:20 pm

First lady Emine Erdoğan paid a visit Tuesday to the Kurdish mothers who are protesting the PKK for allegedly abducting their children in southeastern Diyarbakır province. Showing support for the mothers’ cause, Erdoğan’s visit raised the sorrowful families’ hopes for the new year.

During the two-hour visit, families expressed their gratitude to the first lady for the visit while reiterating their demands of getting reunited with their children. Sharing their happiness over the surprise visit, the families said their hope has been strengthened by the meeting with Erdoğan.

“Emine Erdoğan has come. She made us very happy. I express my gratitude to everyone who visited us. They made us really happy. They gave us hope. We hope that their visit will be instrumental in the return of our children,” said Songül Altıntaş, who has been participating in the protests since Sept. 5 for her 24-year-old son, Müslüm.

It has been 120 days since mothers started protesting against the pro-PKK Peoples' Democratic Party (HDP) in front of its headquarters demanding to get their children back from the terrorist group. The families carrying out the sit-in hope to be reunited with their abducted children in 2020.

“I hope we receive good news in the new year. I hope everyone reunites with their children and I reunite with my child,” said Cennet Kabaklı, who came for her son Adil, abducted four years ago. She also mentioned that she raised her son in difficult conditions after losing her husband when the child was only 2 years old.

Another mother, Fatma Akkuş, is protesting the abduction of her daughter, “We want to start the new year happily. If they had a conscience, they would send our children back.” She said she has not received news about her daughter Songül for five years and does not have the strength to withstand the separation anymore.

The HDP is accused by the government of having links to the PKK terrorist group and accused by the protesting mothers of kidnapping or tricking their children into joining the terror group.

The HDP, long facing public reaction and judicial probes over its ties to the PKK, is under pressure due to this growing civilian protest movement. Various groups from around Turkey have supported the Kurdish mothers in their cause, with many paying visits to show their support.

Güzide Demir, a mother who joined the sit-in on Sept. 7, stated that her son Aziz was abducted four years ago at the age of 16. Indicating that her son called her a year later saying he was wounded, Demir said that she is determined not to leave until he is found. “My son, come in the new year, surrender to our government,” she said.

Authorities have been supporting the sit-in, while Interior Minister Süleyman Soylu amped up efforts for the mothers. As a result, Mekiye Kaya, one of the abducted children, surrendered after fleeing from one of the PKK’s camps in Iraq. Soylu called the family to deliver the good news.