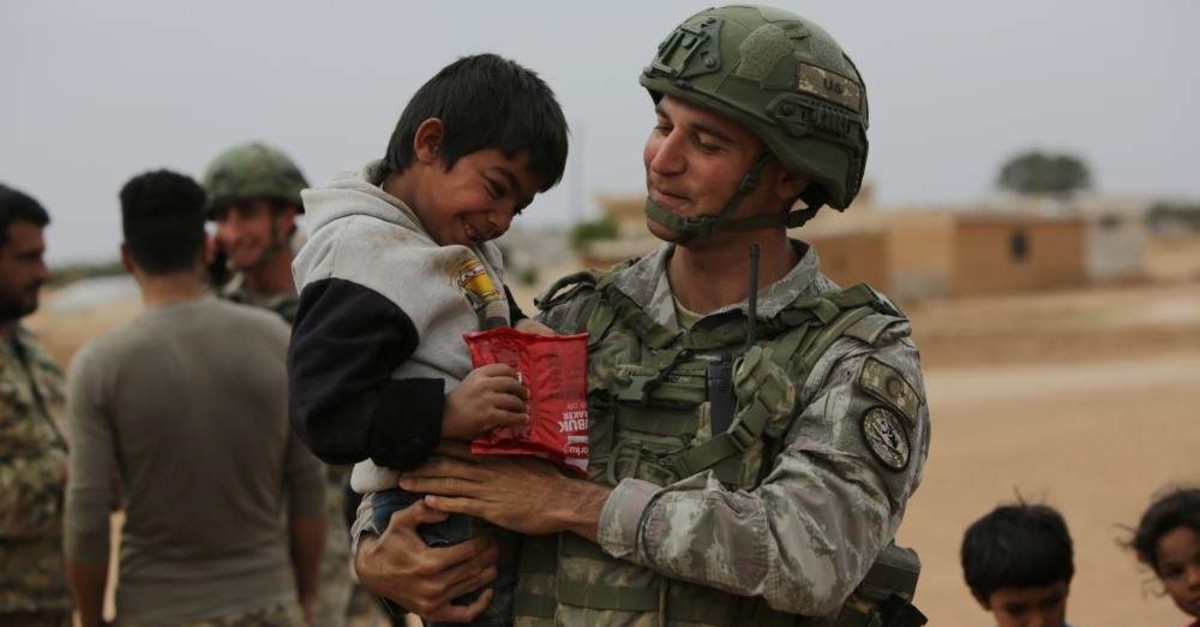 The Turkish Armed Forces (TSK) will continue to fight terrorist organizations while protecting the interests and rights of Turkey in the Mediterranean, Defense Minister Hulusi Akar said yesterday.

"Within this framework, all kinds of threats and dangers toward our noble people's safety and peace, terrorist organizations (the Gülenist Terror Organizations) FETÖ, PKK/KCK/YPG and Daesh, in particular, will be fought determinedly," the minister said in a written statement.

The minister added that the Defense Ministry and the TSK are struggling to contribute to world peace in a time when global and regional risks are increasing. The TSK left behind a successful year with significant achievements including the developments in the defense industry, the new military system for soldiers and preparations for 2020.

Turkey carried out two cross-border operations west of the Euphrates River, Operation Euphrates Shield launched in August 2016 and Operation Olive Branch in January 2018, to drive terrorist groups, including the YPG and Daesh, away from its borders. Separately, Turkey launched Operation Peace Spring on Oct. 9 to eliminate YPG/PKK terrorists from northern Syria east of the Euphrates River to secure Turkey's borders, aid in the safe return of Syrian refugees and ensure Syria's territorial integrity.

Akar also underlined that the latest operation was conducted within the context of rights under international law, the Adana agreement and the U.N. decisions on the fight against terrorism.

Following the liberation of the areas through operations, efforts to clear bombs and improvised explosive devices were launched and administrative duties were given to local councils. According to U.N. numbers, 60% of the people who had been displaced due to the war have returned to their homes. Turkish humanitarian aid groups and institutions provided help for over 30,000 people so far. Turkey's operation also did not hinder the humanitarian aid of other countries and more than 80% of U.N. aid for Syria has crossed through Turkey.

Akar pointed out that, like northern Syria, operations were also conducted in northern Iraq. "Through operations that continue with increasing speed, both within and outside our borders, it has been possible to eliminate alleged (terrorist) leaders and destroy logistics bases and depots, while the terrorist organizations' freedom of movement and acts were significantly hindered with the pressure and precautions," he said.

"Besides, important steps have been taken in Idlib for our region to gain stability, safety and peace, while possible humanitarian tragedies have been prevented," Akar said, adding that efforts within the Astana process and Sochi deal continue.

Turkish security forces regularly conduct counterterrorism operations in the eastern and southeastern provinces of Turkey, where the PKK has attempted to establish a strong presence and base. The TSK also carries out cross-border operations in northern Iraq where PKK terrorists have hideouts and bases that they use to carry out attacks on Turkey.

Apart from the fight against terrorism, Akar said Turkey's rights in the Mediterranean, including Cyprus and its surroundings, are being protected.

"As a guarantor country, we will continue to defend our rights and that of our Cyprus brothers within the framework of international law just as we did until today," Akar said. He also mentioned the recent deals struck with Libya regarding security and maritime borders and stated that these fully comply with U.N. resolutions.

On Nov. 27, Turkey and the Tripoli-based Government of National Accord (GNA) signed a bilateral memorandum, after a meeting between President Recep Tayyip Erdoğan and Fayez al-Sarraj in Istanbul. The deal enables Turkey to secure its rights in the Mediterranean while preventing any fait accompli maneuvers by other regional states.