Displaced Syrian grandmother in camp clings to life for her grandchildren 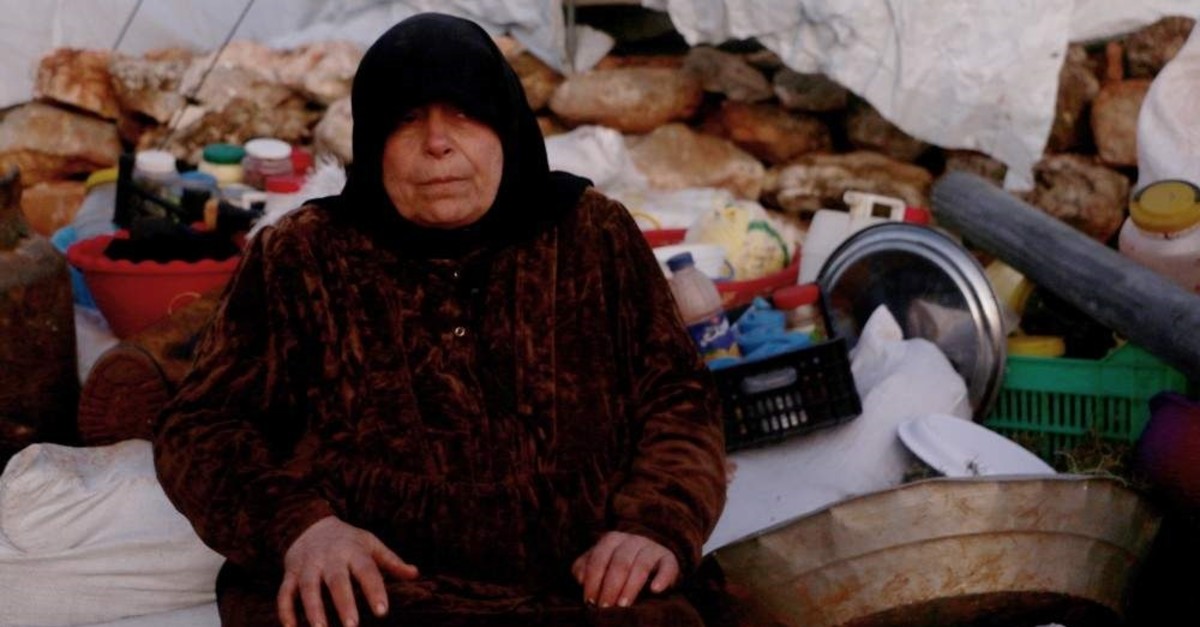 Um Ibrahim tries to survive in a camp near Turkish border alongside with her three grandchildren after fleeing from regime attacks in Idlib, Jan.6, 2020. (AA PHOTO)
by Daily Sabah Jan 06, 2020 3:46 pm

“Enough is enough!” said Um Ibrahim, a grandmother who lost both her husband and two sons during the Syrian regime attacks in northern Syria’s Idlib province. She cried aloud in sorrow, stating her determination to survive for the sake of her granddaughters.

As one of the 1.3 million civilians who have been displaced due to constant attacks by the Bashar Assad regime and its backers, which have been ongoing for almost a year now, Ibrahim suffers under the same living conditions as her fellow refugees.

“We have been living in mud, under heavy rain, in roofless houses as if we are homeless,” she said, explaining the circumstances in which they try to survive to the Anadolu Agency (AA).

The cold weather of winter months, continuous rain mixed with snow and the lack of food, fuel and shelter are only some of the elements that contribute to the already-broken families’ sorrow. Ibrahim tries to hold on to life under these circumstances alongside three of her granddaughters in a tent in a camp near the Turkish border.

Still, despite the harsh conditions, one thing is clear for Ibrahim: She would “rather be dead than hear the sounds of the (war) planes."
According to a report released by the Syria Intervention Coordinatorship on Friday, more than 328,000 civilians have fled their hometowns since November due to regime attacks in Idlib.
The latest reports reveal that at least 253 people were killed and 250 others were injured in Idlib in December alone.
Yet, surviving the attacks is not enough to ensure safety. The civilians who reach the Turkish border after fleeing from the regime attacks are having difficulties finding proper places to settle since the refugee camps are almost full as well as the temporary shelters. Besides, the tent cities lack infrastructure and most tents flood due to heavy rains during winter months, rendering them unusable.

Describing the situation in her hometown before their escape, the sorrowful woman said it was so “terrifying” that they had no other chance but to flee their house.

“Every day, eight helicopters, six to nine Russian aircraft and six or seven regime aircraft would attack. (As a result), we have escaped. What else we could have done? They bombed every part of our house. They have shot it with cannons. The roof has been shot. Even to get out of the village, we had to wait in line for two days,” Ibrahim explained.

Remembering the terrifying atmosphere caused by the warplanes, she said that still, whenever an aircraft goes by, she is shaken because she assumes it is another warplane ready to attack.

“From now on, I do not want to hear any more planes overhead,” Ibrahim said in a faltering voice.

“My heart melts with pain whenever I think that I will not be able to see my children buried in a graveyard again. I will not be able to see them. My heart cannot handle this,” she wept.
Idlib, the last opposition stronghold in Syria, is also home to 3 million civilians. The U.N. has warned of the growing risk of a humanitarian catastrophe in the region, which lies along the Turkish border.

When it comes to her daily life in the camp, Ibrahim said time passes there with “tiredness, sorrow, rain and mud.”

Unable to find a job due to the camp's significant distance from residential areas, Ibrahim and her family are at a point that they cannot even afford to buy bread.

“We owe a debt of 35,000 Syrian pounds ($68) to a baker. He will no longer sell us bread unless we pay that debt. Now, we have started to buy bread with a tab from another baker,” she said.

Ibrahım also had to leave most of her belongings out in the rain due to a lack of space in the tent.

“My only wish from God is to return to my home one day,” she said, calling on the whole world to provide aid to Syria.
After almost nine years of conflict, forcible displacement and torture, Syria is one of the countries in the world in the greatest need of humanitarian aid. Despite the efforts of many NGOs from around the world as well as countries like Turkey, the amount of aid reaching the war-torn country is still not at desired levels, prompting the international community to come up with new initiatives to solve the problem.