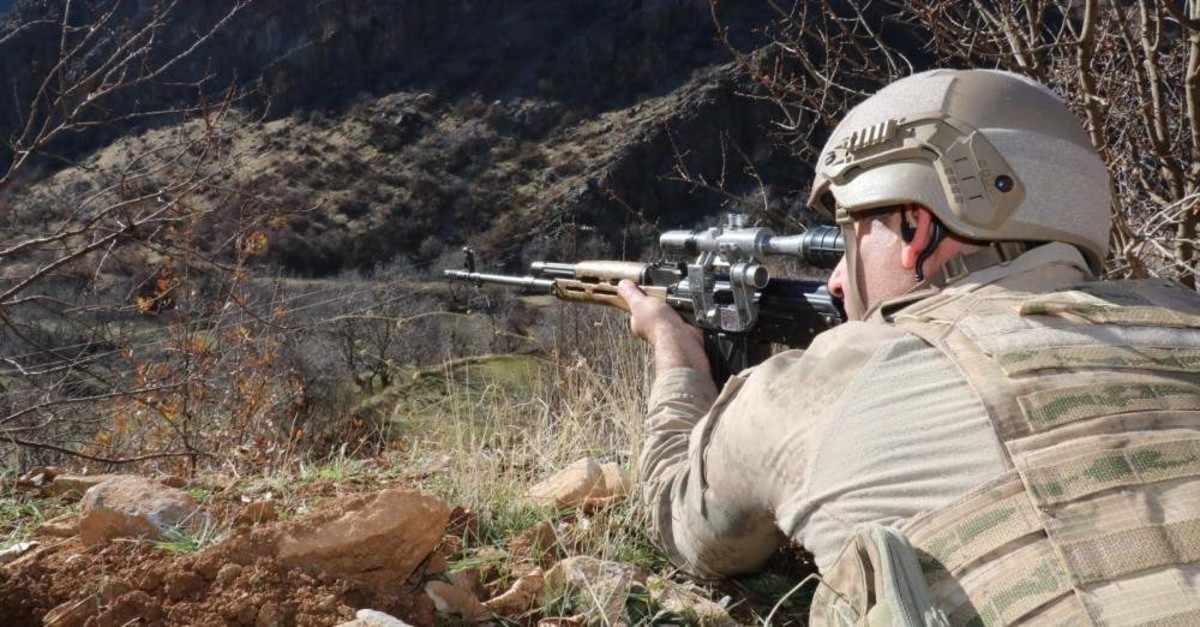 A soldier in Operation Ku0131ran, which is taking place in Hakkari province against PKK terrorists, takes aim at a potential target in this undated photo. (Gendarmerie Command via AA)
by Daily Sabah Jan 12, 2020 5:34 pm
Turkey is pursuing its fight against terrorism at full steam, with only 500 PKK terrorists left at the most in the group's mountain bases, Interior Minister Süleyman Soylu stated Saturday.

"They [PKK] have 500 men at the utmost left in the mountains. They can neither find food, nor recruits. The mothers and fathers in Diyarbakır are also at their throat. We will leave a Turkey free of terrorism to the future generation," Soylu said at the opening ceremony of a ski center on Mount Ilgaz.

Kapan-2 was launched to eliminate terrorists in the country's south, with a total of 623 security personnel, including gendarmerie and police forces, taking part in the operation.

So far, a three-room shelter and three depots have been identified while an improvised explosive device (IED) and a large number of daily use items belonging to the terrorist YPG/PKK have been destroyed.

Turkey launched Operation Kapan in the southeastern province of Mardin as a follow-up of Operation Kiran, which targeted YPG/PKK terrorists in the region in a surge of operations ramping up the country's fight to combat terror.

The Turkish Armed Forces (TSK) have eliminated 1,789 terrorists in military operations in 2019. As part of Turkey's fight against terrorism, the military regularly conducts both internal and cross-border operations, targeting terrorists, as well as their equipment, weapons, caves, shelters and hideouts.

Turkish security forces have focused their counterterrorism operations in the eastern and southeastern provinces of Turkey, where the PKK has attempted to establish a strong presence and base.

In its more than 30-year terror campaign against Turkey, the PKK, listed as a terrorist organization by Turkey, the U.S. and the EU, has been responsible for the deaths of some 40,000 people, including women and children.
Last Update: Jan 13, 2020 3:56 pm
RELATED TOPICS