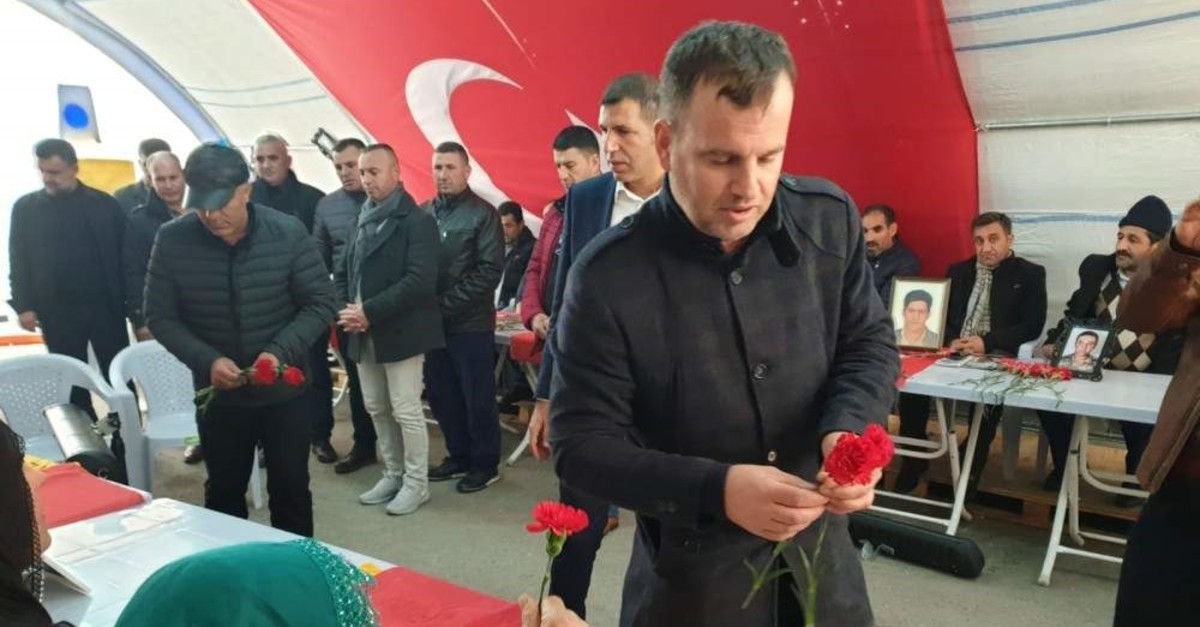 A delegation from Kosovo on Sunday paid a visit to Kurdish mothers who have been staging a sit-in protest for 134 days in a row in front of pro-PKK Peoples' Democratic Party (HDP) headquarters in southeastern Diyarbakır province with the aim of saving their abducted children from the clutches of the terrorist group to show their support and solidarity.

Speaking in the name of delegation, Buyar Morina said they came to Diyarbakır to congratulate the blessed struggle of protesting mothers and wish them patience.

Stating that they are praying for mothers to reunite with their kids, Morina said: "Mothers cry out here, and we cry in front of the screen. I hope that you would reunite with your kids abducted by the terror. I think that four months passed in your protest and you are still here despite all weather conditions. We share your pain and tears. We would like to share your joy, too."

This was not the first time that protesting Kurdish mothers were visited by international groups to show their solidarity. Mothers who lost their children in the Srebrenica massacres back in the Bosnian War and ambassadors from foreign missions in Turkey came to Diyarbakır before to show their support for Kurdish mothers protesting in hopes to get their children back from the PKK terrorist organization.

Since the beginning of their protest, the mothers have received support from across the country with almost all segments of society expressing solidarity with their cause. The number of participating families reached 66 when Gülbahar Teker joined the protest last week, coming from Muş for her son who was abducted six years ago at the age of 26.

So far, four families have been reunited with their children who were abducted by the terrorist group.

According to a statement by the Interior Ministry on Nov. 26, the dissolution of the PKK has recently accelerated thanks to successfully conducted counterterrorism operations and strategies in Turkey and abroad.

Once the terrorists surrender, they are provided with many opportunities including the right to education and the freedom to live without fear and oppression.

They are not treated poorly, are able to contact their families freely and are provided with essential judicial assistance. The Turkish state offers a variety of services to ensure their integration into society.

According to their statements, the ringleaders of the PKK terror group risk the lives of other terrorists to save their own lives and threaten those planning to surrender with torture.

Authorities have been supporting the sit-in, while Interior Minister Süleyman Soylu amped up efforts for the mothers. As a result, Mekiye Kaya, one of the abducted children, surrendered after fleeing from one of the PKK's camps in Iraq. Soylu called the family to deliver the good news.