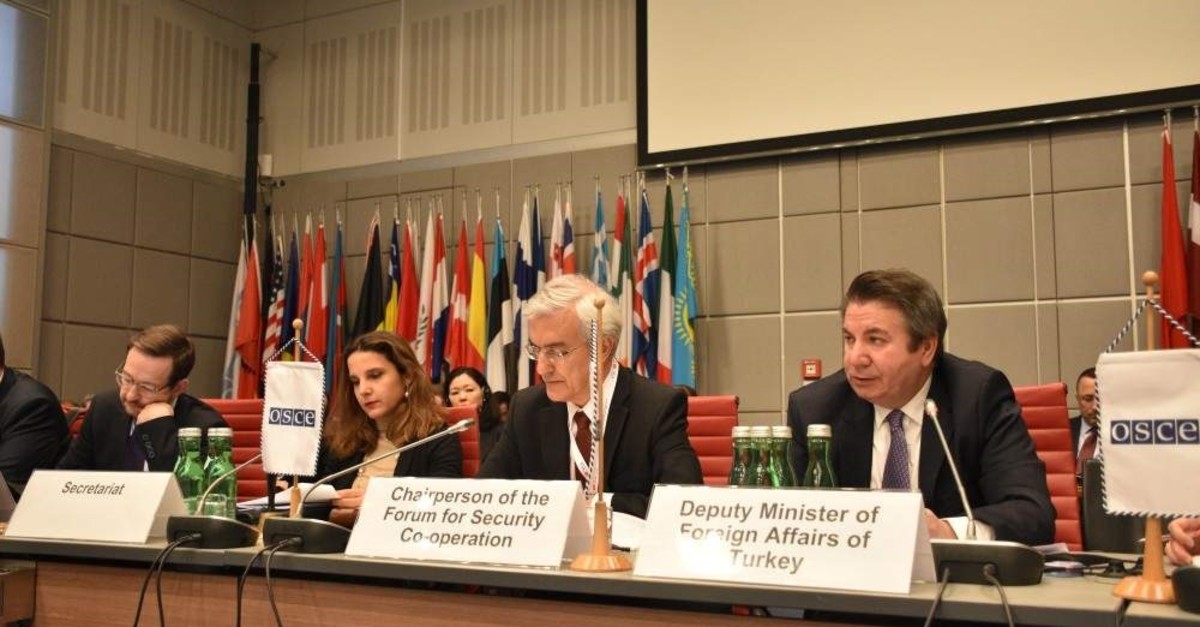 Turkey is ready to exchange ideas with international foundations on how to fight against terrorism on both a regional and global scale, Deputy Foreign Minister Sedat Önal said Wednesday.

Speaking at the first meeting of the Forum for Security Co-operation – one of two main decision making bodies under the umbrella of the Organization for Security and Co-operation in Europe (OSCE) – under Turkey's term as chair in Austria's capital Vienna, Önal evaluated Turkey's priorities, goals and the program as a whole.

Önal underlined the importance of increasing the efficiency of the OSCE in the implementation of stability and security in the region. Confirming Turkey's loyalty to OSCE's main principles and goals, Önal said that Turkey can make contributions to this aim.

"Turkey has been carrying out a struggle against terrorism for decades and suffered a lot from it. It suffered tens of thousands of casualties due to the terror problem. We can find together the methods and tools of efficient contribution and cooperation under this important agenda," he said, adding that Turkey can exchange ideas with the OSCE and other international foundations on how to intensify their efforts in the fight against terrorism on both a regional and global scale.

Another important issue Önal addressed was irregular migration. Explaining that Turkey has been a key country for irregular migration due to its geographic location over the past years, Önal said that 1.2 million immigrants entered the country through illegal methods over the last year.

The Syrian civil war, which broke out in 2011, has killed hundreds of thousands and forced more than 5 million people to flee the country, while more than 7 million are internally displaced. Since the war broke out in 2011, Turkey has received a constant flow of displaced Syrians fleeing the conflict, with the numbers of refugees expanding from thousands to millions.

Turkey hosts the largest number of refugees and is the country that spends the most on humanitarian aid per capita. According to Interior Ministry figures, the number of refugees was 4.2 million in 2017 and has now reached 4.9 million. While 3.7 million Syrians are living in Turkey, more than 415,000 Syrian children have been born in the country since the start of the war. Refugees from Syria now account for about 4.29% of the total population. Women and children make up a majority of the refugees. Furthermore, Ankara has spent $40 billion for the refugees so far, despite a lack of support from the international community.