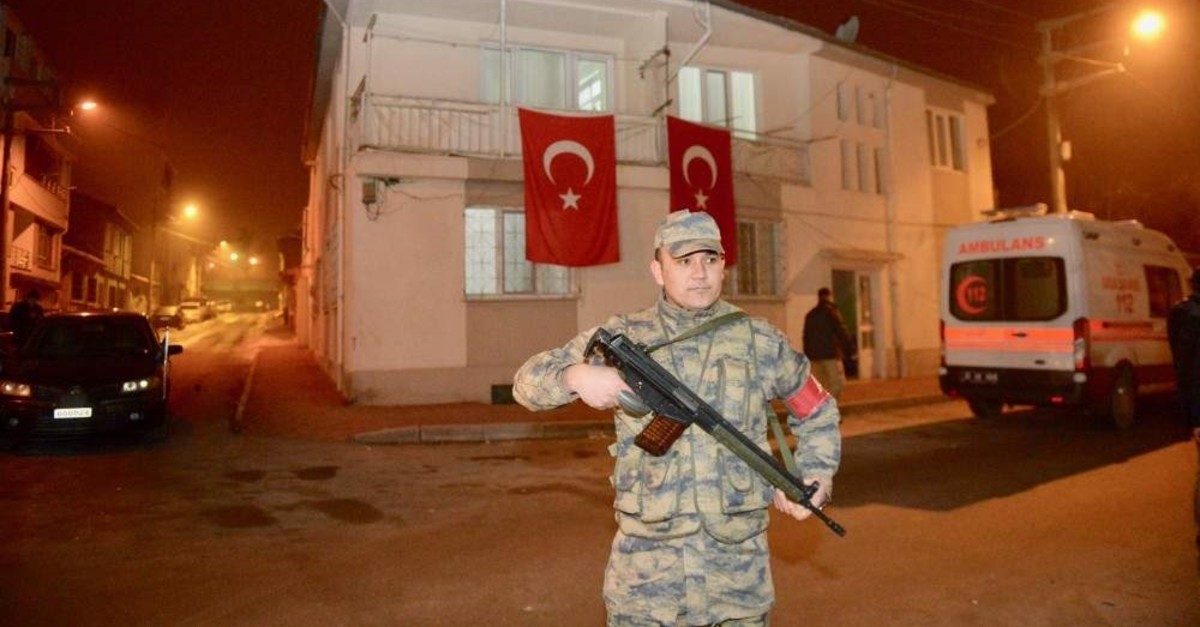 The family of one of the fallen soldiers hung Turkish flags on their home after receiving the news. (AA Photo)
by Daily Sabah Jan 17, 2020 3:20 pm
Three Turkish soldiers were killed in a vehicle bombing late Thursday in the Operation Peace Spring area in northern Syria, the Defense Ministry announced.
In a written statement, the Defense Ministry condemned the attack and offered condolences to the families of the fallen soldiers, the Turkish Armed Forces (TSK) and the Turkish people.
“They will not be able to break up our nation. We will not bow down to terrorism,” Presidential Communications Director Fahrettin Altun wrote on Twitter after the attack, which took place at a road checkpoint.
President Recep Tayyip Erdoğan said Friday on the issue that Turkey would not let the deadly terrorist car bombing in northern Syria "go unanswered."
Even though Russia and the U.S. pledged to clear northern Syria of terrorists, attacks have taken place frequently. Following the launch of Operation Peace Spring on Oct. 9, Turkish forces drove terrorists out of the region. However, terrorists still manage to conduct car bombings and suicide attacks. On Jan. 8, four Turkish soldiers were killed in northern Syria by the PKK’s Syrian offshoot the YPG.
Operation Peace Spring aimed to eliminate terrorists from the area east of the Euphrates in northern Syria in order to secure Turkey’s borders, aid in the safe return of Syrian refugees and ensure Syria’s territorial integrity.
Ankara had reached two separate deals with the U.S. and Russia to pause the operation in order to allow YPG terrorists to withdraw from a planned safe zone, where Turkey wishes to repatriate refugees.
Over the course of its 30-year campaign of terror against Turkey, the PKK – listed as a terrorist organization by Turkey, the U.S. and the European Union – has been responsible for the deaths of 40,000 people, including women, children, and infants.
RELATED TOPICS