Turkey pledges to prevent Libya from becoming 'playground' of terrorists 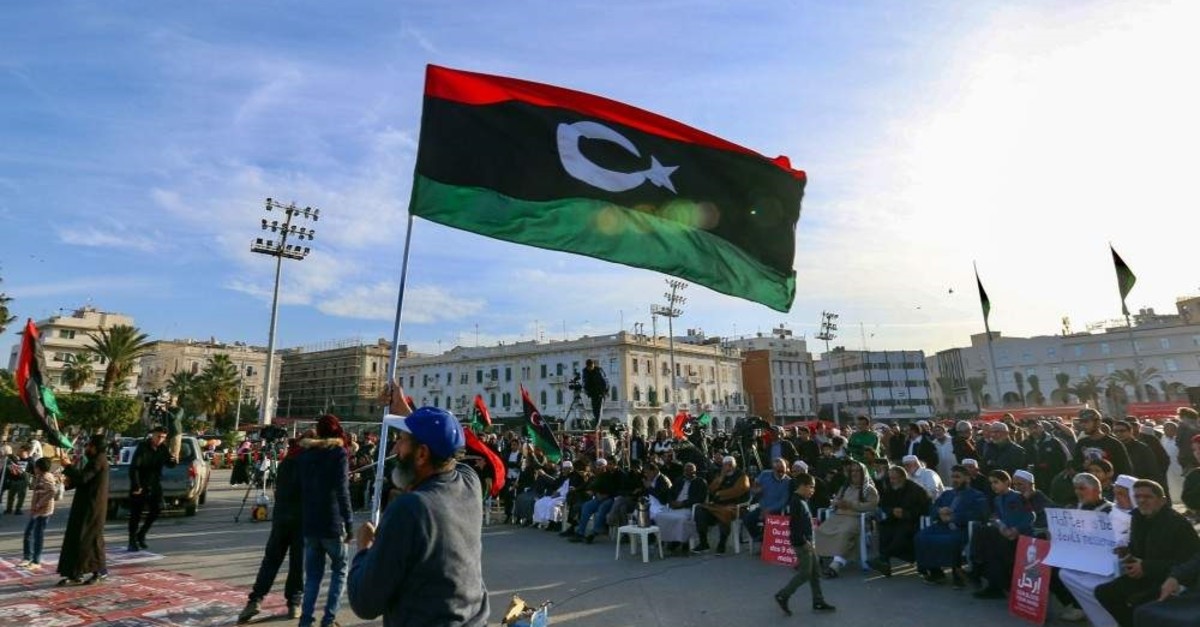 Libyans take part in a demonstration against putschist Gen. Khalifa Haftar, and in support of the UN-recognised government of national accord (GNA), in the Martyrs' Square in the GNA-held capital Tripoli, Jan. 24, 2020. (AFP Photo)
by Daily Sabah Jan 26, 2020 8:35 pm

President Erdoğan reiterated Turkey's support to the Libyan people and legitimate government against illegitimate forces, pledging to protect Libya from becoming a playground of terrorists and warlords

Turkey will continue to side with the Libyan people to prevent the conflict-ravaged country from becoming a playground for terrorist groups and warlords, President Recep Tayyip Erdoğan said Sunday in Algeria, the first stop of his three-nation African tour.

"We, as Turkey, will continue to side with our Libyan brothers with all of our resources," Erdoğan said. Turkey won't allow for Libya to become the playground of terrorist groups and warlords, he added.

Eastern-based forces loyal to putschist Gen. Khalifa Haftar continue their attacks targeting residential places and civilians to capture the capital Tripoli from the U.N.-recognized legitimate government, despite calls for a cease-fire at the Berlin conference.

A week later, Haftar accepted terms in Berlin to designate members to a U.N.-proposed military commission with five members from each side to monitor the implementation of the cease-fire. However, his blockade of Libyan oil fields overshadowed the summit in Berlin last week aimed at shoring up a shaky truce.

In Berlin, foreign powers agreed to form a special committee made up of five military officials from each side to monitor the truce. But Erdoğan said on Sunday he did not expect a result from that committee due to Haftar's stance.

Several countries backing rival factions in Libya have violated an arms embargo which they had agreed to uphold a week ago at a summit in Berlin, the U.N. said on Saturday.

Since the ouster of late ruler Moammar Gadhafi in 2011, two seats of power have emerged in Libya: one in eastern Libya supported mainly by Egypt and the United Arab Emirates and the other in Tripoli, which enjoys U.N. and international recognition.

Haftar's forces aim to capture the capital, Tripoli, through the backing of Egypt, the UAE, Russian mercenaries and some African troops. Turkey, meanwhile, backs Fayez al-Sarraj's internationally recognized Government of National Accord (GNA).

Algiers, for its part, has taken on a role as mediator and last week hosted a meeting of Libya's neighbors that rejected "any foreign interference" and called for a negotiated settlement.

Underlining Turkey and Algeria's commitments to stop the bloodshed in the country, Erdoğan said: "The solution in Libya cannot be reached with military initiatives. Dialogue, reconciliation and comprehensiveness are key for permanent stability."

Another important point Erdoğan mentioned was the lack of support from the international community for a political solution in Libya.

"Unfortunately, the international community did not show good performance in both Syria and Libya," Erdoğan said.

Speaking to reporters in Istanbul earlier in the day before his departure, Erdoğan also commented on reports of violations of the truce struck in Libya.

Erdoğan said Haftar's forces have repeatedly violated the cease-fire in Libya, adding that international support for Haftar forces has been "spoiling" Haftar.

"First of all, Haftar is a putschist," Erdoğan said adding: "At this point, we need to see clearly what Haftar's identity is. He is a man who has betrayed his superiors before as well. It is not possible to expect mercy and understanding from someone like this on the cease-fire."

"He's continuing attacks with all his resources. However, he will not be successful here," Erdoğan added.

Turkey has repeatedly said Haftar must choose a political solution to the conflict and urged foreign powers to press the putschist general into a truce. It has also sent military advisers and trainers to help the legitimate government fend off Haftar's assault on Tripoli.

Ankara has said that it will abide by a U.N. arms embargo on Libya as long as the cease-fire is maintained, but it warned that it could also deploy troops if necessary.

Fighting has abated in the past weeks but picked up on the weekend at the frontline in southern Tripoli, where artillery fire could be heard. More than 150,000 people have been displaced by the months of fighting.

President Erdoğan, accompanied by a high-level business delegation, was greeted at Algiers airport by his Algerian counterpart Tebboune.

Before his face-to-face meeting with the Algerian president, Erdoğan visited the Martyrs' Memorial. He placed a wreath at the memorial in memory of Algeria's independence war against French invaders.

In his three-country Africa tour, Gambia and Senegal will be the next stops for Erdoğan. Gambia will count as the 28th country in Africa that Erdoğan has visited over the course of his terms as prime minister and president.

Gambia has been a supporter of Turkey's fight against the Gülenist Terror Group (FETÖ) since the beginning.

Turkey-Africa relations have gained substantial momentum since the declaration of Turkey as a strategic partner of the continent by the African Union in January 2008.
RELATED TOPICS