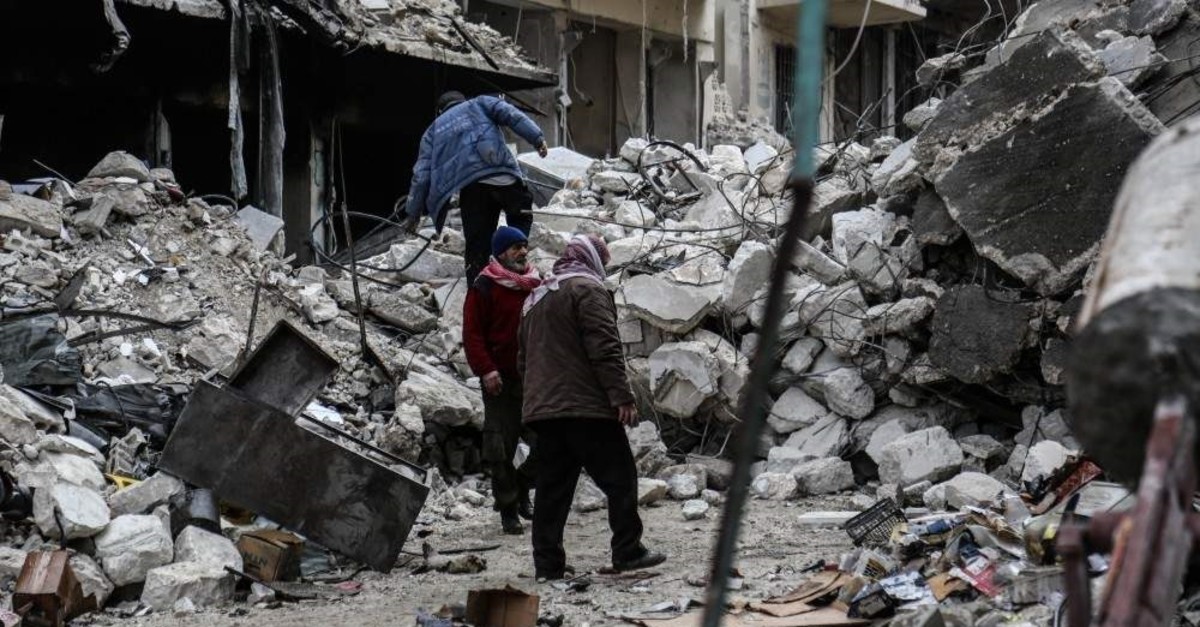 In a campaign to take control of the country by gaining land with a blatant disregard for growing casualties, the Assad regime is advancing, leaving behind wreckage and chaos

The Bashar Assad regime wrecked the historic district of northwestern Syria's Idlib province and destroyed historical artifacts after recently taking control of it.

On Wednesday, forces loyal to the Assad regime, backed by Russia, seized Maarat al-Numan, a semi-deserted town of symbolic and strategic importance in Syria's last major opposition-held bastion, located in the southern part of Idlib. They devastated the city, bombarding buildings and places of historical importance. The town, which is about 70 kilometers from Turkey, hosts a number of inns, mosques and madrasah's dating back to the Ottoman era.

Maarat al-Numan, which had been under the control of opposition forces since 2012, turned into a ghost town after the Syrian regime intensified its attacks on the town in November 2019. About 300,000 civilians have been displaced from the town since November, according to data of the Syria Intervention Coordinatorship, which carries out migration studies in the region.

The shrine of Caliph Umar bin Abdul Aziz in the village of Deir al-Sharqi was raided by Assad's forces and the cists were destroyed while part of the shrine was lit on fire, according to Yeni Şafak daily.

Maarat al-Numan is now a field of leveled or gutted buildings, where shops' iron shutters are riddled with bullet holes and shrapnel scars. The only people left in the once vibrant town are just a handful of soldiers taking up positions.

Majed Marahesh, 27, remembers the day he first visited Maaret al-Numan 13 years ago with his classmates and teacher.

"I remember its beauty and refinement," he told Agence France-Presse (AFP). "I remember the mosaics in its museum. I am back 13 years later, but it's not the town I knew."

Maaret al-Numan is nestled in a UNESCO-listed region of ancient villages, and its mosaics museum had achieved international renown.

The museum, housed in an Ottoman-era caravanserai, was seriously damaged in a government barrel bomb attack in 2015. "Many antiquities have been stolen," Marahesh said, looking at the devastation around him. "There was a lot of damage to the museum."

Among the museum's most prized works is a depiction of the birth and life of Hercules, according to former Syrian antiquities director Maamoun Abdul Karim.

As the conflict escalated, volunteers did their best to preserve the Roman and Byzantine-era mosaics from airstrikes and shelling, including heaping sandbags against them. Some of the mosaics have survived, but the museum needs to be rebuilt.

Idlib, as the last opposition bastion and a strategically important point, had been seeing a surge in violence for some time since the Assad regime vowed to take it back from opposition forces. While the Assad regime and its backers disregarded the killings and displacement of the Syrian people, Turkey and the U.N. urged the international community frequently to react to the dire humanitarian disaster unfolding in northwestern Syria.

Turkey will not remain silent about regime oppression

President Recep Tayyip Erdoğan said Friday that every development in Syria is as significant, vital and critical as developments within Turkey.

"We will not remain silent on the situation in Syria and Idlib. Turkey with complete sincerity wants Syria's stability and security, and to this end, we will not shy away from doing whatever is necessary, including using military force," Erdoğan said during a meeting of provincial heads of his ruling Justice and Development Party (AK Party) in the capital Ankara.

Reminding that Turkey signed an agreement with Russia on Syria, the president said that the agreement was gradually broken by the Assad regime and its supporter Russia with blood and pain.

"We approach the same parting in the way we faced the Operation Peace Spring area, where promises given to us were not held," Erdoğan said, adding that nobody has the right to force Turkey to give consent to the Assad regime's oppression.

"We will not allow the Syrian regime to hold our country under a continuous threat of migration by oppressing their own people, attacking and shedding blood," the president stressed. He underlined that the sole answer to the Syrian crisis is a political process that embraces all citizens.

Erdoğan indicated that gains that come from controlling land by burning, killing and forcing migration will not serve anything but to hinder the political process and said the only aim of those encouraging the Assad regime to do so is to ensure that the Syrian crisis will continue.

The Kremlin, on the other hand, said Friday that Russia was fully compliant with its obligations in Idlib, but that it was deeply concerned about what it said were aggressive militant attacks on Syrian regime forces and Russia's Hmeimim air base.

Upon all the recent developments and the increase in violence, the U.K. has voiced its condemnation regarding the Assad regime's and Russia's assaults, underlining that both have violated repeatedly international humanitarian law by targeting schools, hospitals and emergency response teams.

"More than 1500 civilians died and hundreds of thousands have been displaced due to the attacks of Russia and the regime since April," U.K. Foreign Minister Dominic Raab said on Friday during a statement.

Earlier this week, Erdoğan had accused Russia of violating agreements aimed at stemming the conflict and said that Ankara was losing patience with the continuous assaults on civilians.

An assault on Idlib by regime forces in recent days has pushed some 700,000 people to flee toward the Turkish border, raising the specter of an international crisis, U.S. Special Envoy for Syria James Jeffrey said Thursday.

Backed by Russian airpower, regime forces have rapidly advanced on Idlib since last week, upending an area where millions have taken refuge since the start of Syria's nearly nine-year war.

Jeffrey told a news briefing that the Syrian regime and Russian warplanes had hit Idlib with 200 airstrikes "mainly against civilians" in the past three days.

Following statements that condemn the Assad regime and its backers for their aerial bombardments and ground attacks targeting civilians in Idlib on Thursday, Germany announced that it will give the Turkish Red Crescent support of 25 million euros ($27.63 million) for housing projects designed for displaced Syrians.

German government spokesperson Steffen Seibert on Friday stated that the continuous news of assaults on civilians was dreadful, while German foreign ministry spokesperson Christofer Burger highlighted that Germany was one of the countries providing the most financial help for the Syrian crisis.

"The German foreign ministry will give the Turkish Red Crescent support of 25 million euros for providing emergency housings for those that fled Idlib," Burger said.

The German foreign ministry in a written statement on Thursday said, "The Federal Government condemns increasing attacks against civilian infrastructure and urges the Syrian regime and its allies to guarantee the protection of civilians and comply with the international humanitarian law."

"We are calling for an immediate and genuine cease-fire as well as unrestricted humanitarian access to all people in need and especially to displaced people," it was stressed, adding that the recent military offensive is undermining efforts for a political solution to the conflict.

The statement came just after at least 10 civilians were killed when Russian warplanes hit residential areas in Idlib overnight, according to local sources.

During the week of Jan. 15 to Jan. 23, the United Nations Human Rights Council (OHCHR) documented incidents in which at least 81 civilians, most of them women and children, were killed as a result of airstrikes and ground-based strikes. This total is in addition to the more than 1,500 civilian deaths that OHCHR has verified since the escalation began in late April.

In September 2018, Turkey and Russia agreed to turn Idlib into a de-escalation zone in which acts of aggression are expressly prohibited. But more than 1,300 civilians have been killed in attacks by the regime and Russian forces in the zone since then as the cease-fire continues to be violated. In a fresh move, Turkey and Russia announced on Jan. 10 that a new cease-fire in Idlib would start just after midnight on Jan. 12. However, the regime and Iranian-backed terrorist groups have continued their ground attacks. The renewed assault came despite the Jan. 12 cease-fire deal between Turkey and Russia, which backed the opposing sides of the conflict.