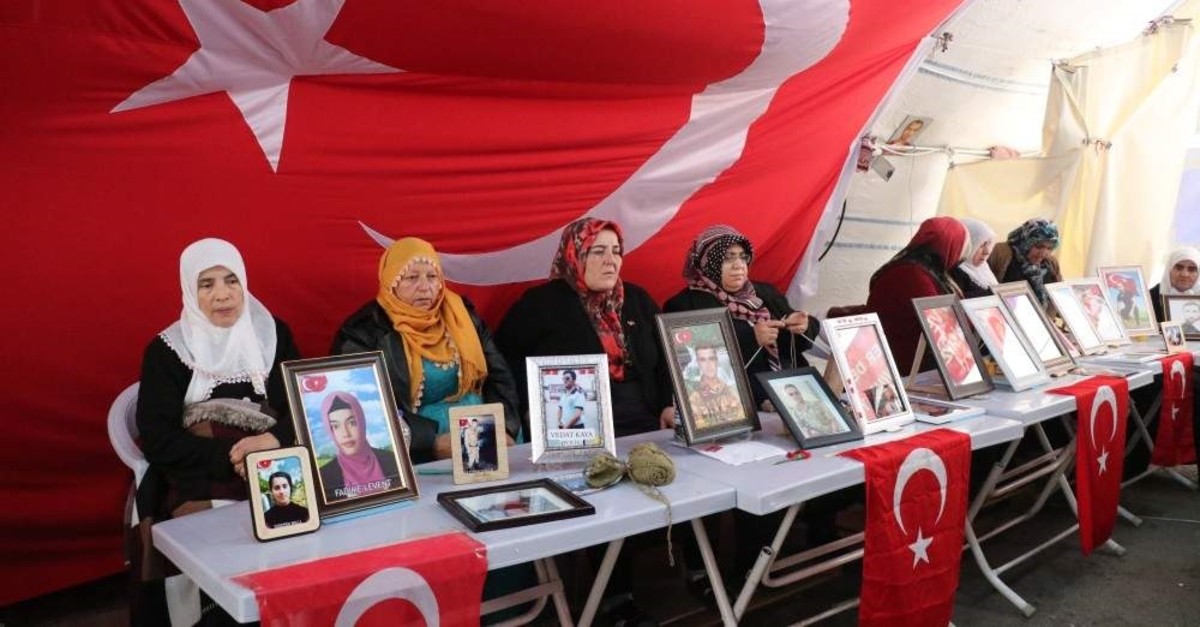 Sit-in protests by Kurdish families against the abduction of their children by the PKK terror group entered its 160th day on Monday in front of the pro-PKK Peoples' Democratic Party (HDP) headquarters in southeastern Diyarbakır province.

Continuing her protest despite severe winter conditions, a mother Güzide Demir said that she joined the protests because her then 16-year-old son Aziz was abducted by the terror group.

Demir vowed to continue protesting until she takes her son back. “We have been here for 160 days; we will stay here even if it is 160 years," she said. "I miss my son too much. I wish to see him and smell him."
"I cry every day and my blood pressure rises. (There is) no peace at our home," she added.

She said she called her son and asked him to surrender to the state. "Mountains are not your home," she said to him.

Salih Gökçe, a father from the protests, also said he will continue waiting for his son even if it takes 160 years.

Meanwhile, another father, Mehmet Laçin, continues his sit-in protest in front of the HDP's provincial headquarters in Izmir, where he traveled from Diyarbakır for medical treatment.

Speaking to reporters, Laçin said his then-high school student daughter Gamze was abducted by the terror group in 2011, and he was assaulted when he went to the HDP’s Diyarbakır office to ask about her.

Explaining that he has been unable to speak to his daughter for nine years, Laçin added: “When I was protesting in Diyarbakır, I saw photos of my daughter taken on the mountain. I do not know where she is currently. I just know that she is in the clutches of the PKK terrorist organization. They do not abduct these children to nurture them but to use them as criminal instruments.”

Laçin also said he has been conducting his sit-in protest for 160 days and will rejoin the protests in Diyarbakır when he returns.

The protest started one night when Hacire Akar turned up at the doorstep of the HDP's Diyarbakır office. A week later on Sept. 3, families inspired by Akar transformed her solo stance into a collective sit-in protest. Akar's son Mehmet returned home on Aug. 24, giving hope to other families.

The sit-in protests are seen as a reaction against the outlawed PKK, a terror group that has abducted and recruited their children. The families also blame the HDP, a political party many believe is in league with the PKK. Since the beginning of their protest, the mothers have received support from across the country with almost all segments of society expressing solidarity with their cause.

They are treated fairly, are able to contact their families freely and are provided with essential judicial assistance. The Turkish state offers a variety of services to ensure their integration into society.

According to their statements, the ringleaders of the PKK terror group risk the lives of other terrorists to save their own and threaten those planning to surrender with torture.

In its more than 35-year terror campaign against Turkey, the PKK – listed as a terrorist organization by Turkey, the U.S. and the European Union – has been responsible for the deaths of 40,000 people, including women, children and infants. The YPG is PKK's Syrian offshoot.