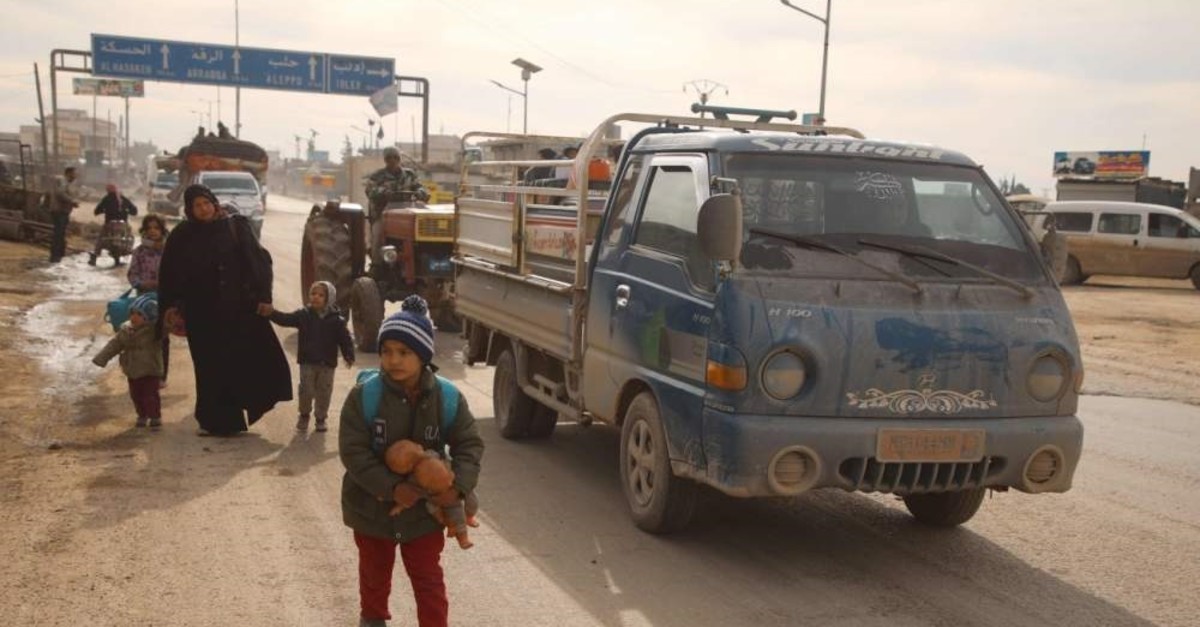 Upending years of diplomatic efforts, Russia continues to target civilians in Idlib, causing a humanitarian crisis, while also trying to distance itself from the escalating tension through empty words

Despite repeatedly claiming it wants to put an end to the conflict in northwestern Syria's Idlib, Russia continues to fuel the war with attacks. It has increasingly assumed a hypocritical stance at the expense of a humanitarian catastrophe in the region.

On Tuesday, Moscow released one of its usual statements – a couple of sentences on the humanitarian chaos in Idlib, an expression of concern on the escalating tensions but no concrete actions on the ground to back these words.

"At the moment, we consider the implementation of the Sochi agreement and the suppression of any terrorist activity against Syrian forces and Russian military facilities our top priorities," he said, adding that the situation "worries" Kremlin.

While the statement was circulating in media, there was other news coming from the region. Reports claimed that 12 more civilians were killed in attacks launched by the Syrian regime and Russia in Idlib. According to the U.K.-based Syrian Observatory for Human Rights, half of those civilians killed were children, adding yet another layer to the tragedy caused by Russia's actions.

It has been months now since regime forces sped up attacks on Idlib, the last opposition stronghold in the war-torn country, targeting innocent civilians under the pretext of fighting terrorists. However, the regime is not alone in its attacks, ongoing since April 2019. As its backer, Russia is often active on the ground aggravating the humanitarian crisis.

According to a U.N. statement on Tuesday, nearly 700,000 people have fled the region due to the regime offensive on Idlib. This marked the biggest movement of migrants in the nine-year-old conflict.

"In just 10 weeks, since Dec. 1, some 690,000 people have been displaced from their homes in Idlib and surrounding areas," a spokesperson for the Office for the Coordination of Humanitarian Affairs said.

"This is, from our initial analysis, the largest number of people displaced in a single period since the Syrian crisis began almost nine years ago," David Swanson said.

Syrian families displaced by the attacks try to live under harsh winter conditions in camps near the Turkish border.

"Existing camps and settlements for internally displaced persons are overcrowded, and shelter in existing houses is getting scarce," the U.N. refugee agency said Tuesday.

"Many schools and mosques are filled with displaced families, and even finding a place in an unfinished building has become close to impossible," it said.

Alarmed by the issue, Turkey, which hosts the highest number of refugees in the world, is determined to tackle the problem outside of its borders. Thus, it has been engaging with diplomatic efforts for years now, especially with countries like Russia and Iran.

As part of its efforts, Turkey has launched the Astana process with Russia and Iran and signed the Sochi deal with Russia that had declared Idlib as a de-escalation zone to prevent a humanitarian crisis.

Despite the efforts, regime forces and Russia have continued to create chaos in the region. Still, Turkey continues its diplomacy with Russia, the latest step of which came on Monday as a Russian delegation visited Ankara.

"It was made clear to the Russian Federation that it should undertake its responsibilities stemming from the Sochi agreement, to which it is a guarantor state," a statement from the Turkish presidency said on the issue Monday.

"Turkey is ready to implement any measures to prevent the hindrance of the political process in Syria, to protect its soldiers and ensure the implementation of the Sochi deal," it added. Yet, the meeting ended without reaching a joint conclusion on the matter. But efforts continue on Turkey's part as a phone call between Erdoğan and Putin was expected to take place on Tuesday evening.

The aggressive Russian and regime stance in the region not only attracts reaction from Turkey but also from the international community.

NATO Secretary-General Jens Stoltenberg condemned the regime attacks on Idlib Tuesday. "We have seen indiscriminate shelling of civilian targets, and we condemn this because we condemn indiscriminate attacks against civilians," NATO Secretary-General Jens Stoltenberg told reporters ahead of a NATO defense ministers meeting Wednesday.

"I'm very concerned about the situation in Idlib because we have seen horrendous attacks against civilians. We have seen, again, that hundreds of thousands of people have been forced to flee," he added.

Stoltenberg also called on the Assad regime and Russia to stop attacks in Idlib and stated that the issue is expected to be raised at the defense ministers' meeting.

"We call on Assad and Russia, because Russia provides support to the regime, to stop these attacks, to respect international law and to fully support the U.N. efforts to try to find a peaceful solution," he said.

Another statement came from the U.S. embassy in Ankara on Tuesday.

"The destabilizing actions of Russia, the Iranian regime, Hizballah & the Assad regime are hindering the establishment of a nationwide ceasefire in Syria as called for an UNSCR 2254 & the safe return of hundreds of thousands of displaced persons in northern Syria to their homes," the embassy said on its official Twitter account.

"We call for an immediate ceasefire and full access to the affected areas by humanitarian organizations to alleviate the suffering of the hundreds of thousands that have fled the incessant bombing," it added.