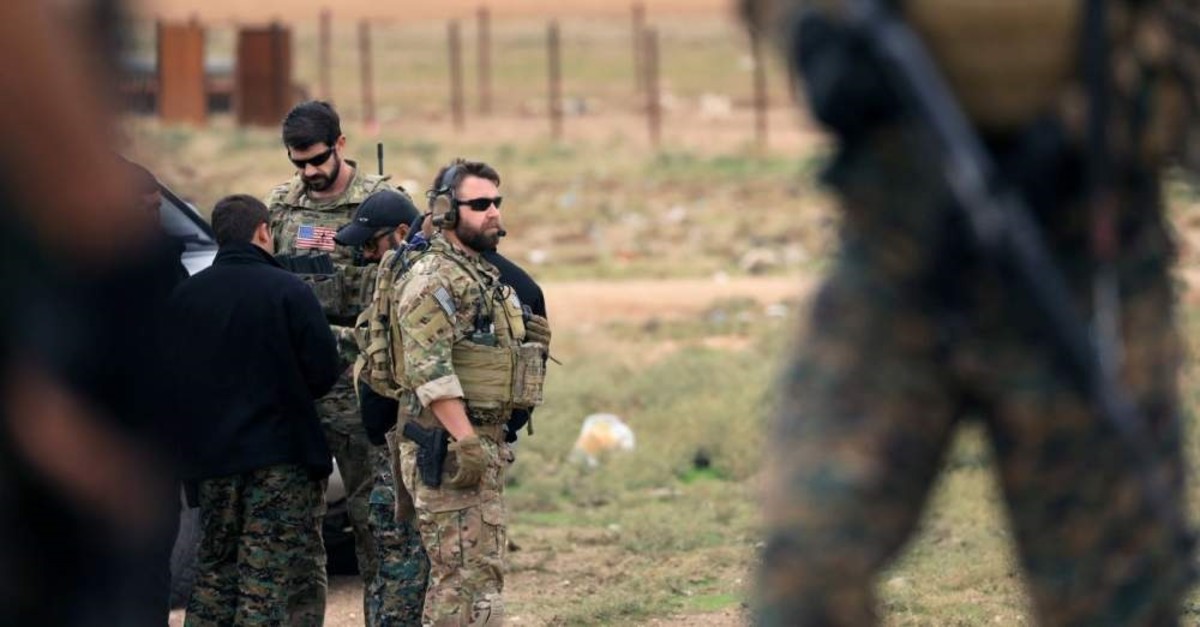 The last two decades witnessed a major shift in Turkey-U.S. relations, showing the latter's convergence with the PKK terrorists despite once pondering how to fight against them

"It is disappointing for us to see that the U.S. is sharing the information that was once shared with us (the Turkish forces) back in the day with the terrorists today," said a former ranger of the Turkish Special Forces and a close witness of the era marked by exemplary collaboration between the two NATO allies.

On Feb. 15, a tweet circulated all around social media, attracting attention specifically from Turkish users for its unique ability to portray the change within the Turkish-U.S. ties over the last 20 years in just a few characters.

"I was at US Army SF Q course in N.C. on 15 Feb. 1999 when the US soldiers and I cheered together over the capture of PKK's leader. Then we expressed solidarity in fighting against terrorism. Now, the US SF teaches the PKK's offshoot in Syria how to kill TR soldiers. Solidarity?" asked Necdet Özçelik, a security researcher who was once trained by the U.S. military as one of the Turkish rangers.

Özçelik's question, full of disappointment, surfaced on the 20th anniversary of the extradition of the PKK leader Abdullah Öcalan to Turkey.

"Current U.S.-PKK relations are disturbing for many people, including myself. I just wanted to express my disappointment over the issue," Özçelik said, speaking to Daily Sabah.

Back in the 1990s, the U.S. had a special program to provide military assistance to NATO member countries and others. In these programs, the militaries, including special forces, of NATO-member countries received trained.

"I was also there," Özçelik said, referring to a training program in 1998 at a military base of the U.S. state of North Carolina.

"Toward the ending of the training program, we were focusing on the tactics of guerrilla warfare and how to fight against it. It was basically training on the combat of regular armies against paramilitary groups," Özçelik explained.

The incident that Özçelik mentioned in his tweet took place right around that time, in February 1999, toward the ending of the training when the fight against terrorism was the main subject of the program.

"We were in an artificial unconventional warfare environment. It was a rural area where we were participating in various military exercises. We were in a completely isolated environment where there were no options to communicate with the outside world," Özçelik remembered. "However," he said, "we were still trying to stay informed on the process of Öcalan's extradition from Syria."

The trainees were not exactly sure what happenings were taking place in the outside world, but he remembers getting the news on Öcalan's capture.

"When we were in the dark like that, one day, an American military officer came and gave us the big news. We all rejoiced. Upon the news, we started to talk deeply about our experiences regarding paramilitary groups and coping mechanisms against them," the security researcher recounted.

Turkey captured Öcalan in February 1999 after a long string of extradition attempts, first from Italy and then from Syria. Öcalan, now 71, founded the PKK in 1978. After the abolishment of the death penalty in Turkey in 2002, his sentence was commuted to life imprisonment. As a result, the country imprisoned him on the heavily fortified island of İmralı in the Sea of Marmara where he has been kept for 20 years.

The PKK, which is listed as a terrorist organization by Turkey, the U.S. and the European Union, waged a terror campaign against Turkey for more than 40 years and has been responsible for the deaths of nearly 40,000 people.

In the hours that followed the news, as Özçelik reported, the U.S. soldiers who had previously been on duty in northern Iraq shared their experiences in the fight against terrorism.

"We talked about how we could support each other by having a joint fight against terrorism. There was a sense of partnership," he highlighted.

Yet, according to Özçelik, it was almost a peak in the bilateral ties of the NATO allies as, after that day, things went downhill with scandalous incidents such as the Hood event, in which Turkish soldiers operating in northern Iraq were captured and interrogated by U.S. military personnel.

On March 1, 2003, the Turkish Parliament refused to pass a mandate for military action that would enable Turkish soldiers to act in foreign countries, a move that was highly desired by the U.S. since it was seeking to back the Turkish army in its invasion of Iraq at that time.

After the rejection of the resolution, Turkish Special Forces soldiers in Iraq's Sulaymaniyah province were detained by U.S. forces on July 4, 2003. Putting hoods over the Turkish soldiers' heads, the U.S. military interrogated the detained soldiers, creating a scandal that would harm bilateral ties for years.

"Gradually, Turkey started to reduce the number of the military personnel who were participating in these trainings of the U.S. Around 2006, it completely stopped sending any soldiers at all," Özçelik said, adding that things have now reached a point where U.S. soldiers stand side-by-side with the PKK terrorists.

"You see that these terrorists are being trained on armament and how to fight against both regular and irregular armies. As a result of these trainings of the terrorists, your friends are being killed. I lost a friend in Afrin to a directed missile fired by the PKK/YPG. I know that the U.S. taught these terrorists how to use those missiles," the former ranger said, explaining his disappointment and sorrow over the case.

Under the pretext of fighting against Daesh, the U.S. has been providing military training and given truckloads of military support to the YPG, the PKK's Syrian affiliate, despite its NATO ally's security concerns. While underlining that one cannot support one terrorist group in the fight against another, Turkey conducted its own counterterrorism operations during which it managed to remove a significant number of terrorists from the region.

As a reason behind this divergence between the allies, Özçelik said the U.S.' pragmatic stance to diplomacy has a major part in it.

"The U.S. merges international politics with its own national security agenda and comes up with a pragmatic approach to world issues," he said.

"Yet," he added, "this pragmatic approach also shows that the current partnership with the PKK can also be dissolved at any time, depending on the new developments."

However, in Özçelik's opinion, the developments in Syria and the fact that the U.S. does not want the ruling Justice and Development Party (AK Party) in power also caused the U.S. and Turkey to put an end to the former partnerships between the two countries' institutions.

Developing a close partnership following World War II, Turkey and the U.S. have developed rocky ties since the early days of the alliance.

The first disappointment came in 1964 when Turkey decided to take action in Cyprus, where the Turkish Cypriots were suffering under the Greek Cypriots. The U.S. president at that time, Lyndon B. Johnson, sent a letter to Turkish President İsmet İnönü, saying that in case of an invasion on the island, NATO would not side with the country.

Known as "Johnson's letter," the incident became the first of many letdowns by NATO and left a negative impression on the Turkish public. In 1974, the U.S.' disappointing attitude continued with an embargo on arms sales to Turkey following the country's intervention in Cyprus once again.

The Cyprus case and the attitude of the U.S. and NATO during the process have never been forgotten by Turkey and created the beginning of anti-NATO and anti-U.S. sentiment within the country, which has continued decades later.

Apart from the Hood event, Johnson's letter and the Cyprus issue in general, the country's stance toward Turkey's fight against terrorism has been one of the biggest points of disappointments between the two.

"The Turkish soldiers can even get over the Hood event, but they cannot forget that the U.S. left them and ended up having a partnership with the PKK terrorists," Özçelik said.