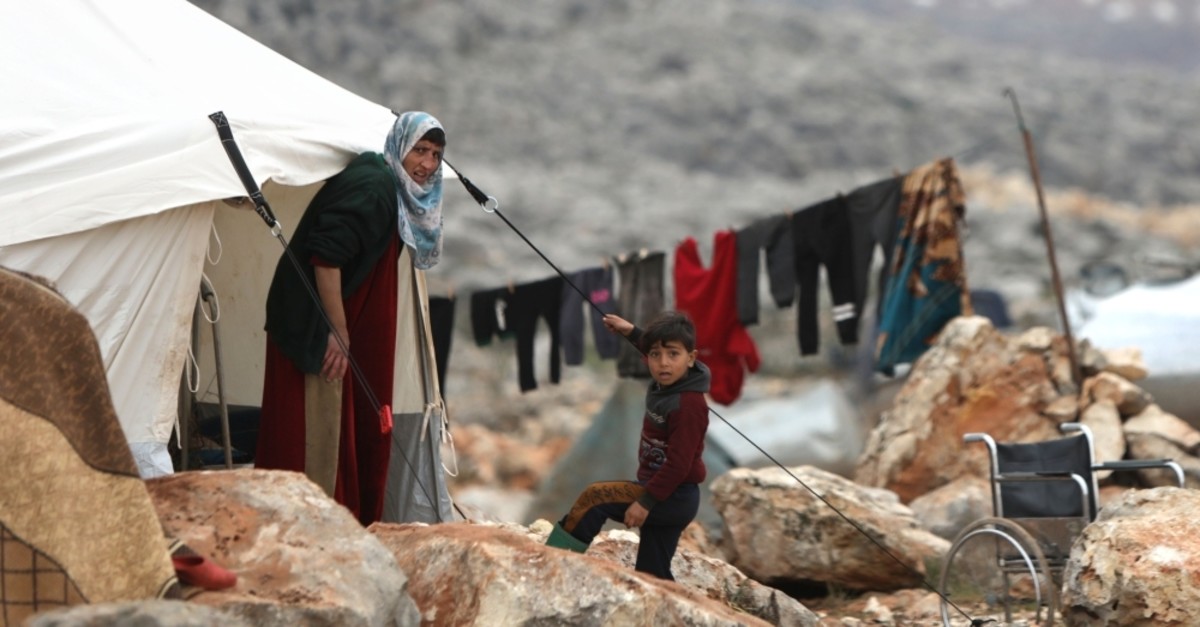 Syrians who fled pro-regime forces' attacks in Idlib and Aleppo provinces are pictured at a makeshift camp for displaced people on Feb. 18, 2020, north of the city of Idlib, near the Turkish border. (AFP Photo)
by Uğur Yıldırım Feb 20, 2020 4:11 pm

As the regime advances from the south of the province have gotten closer to Idlib city, displaced civilians have been left with no place to run. While refugee camps near the Turkish border are overcrowded, hundreds of thousands of people are moving toward areas liberated by Turkey's previous cross-border anti-terror operations Olive Branch and Euphrates Shield. Both cleared areas near the Turkish border in northern Syria from YPG/PKK and Daesh terrorist elements, which posed a major threat to Turkey's national security.

The Syrian regime has even targeted settlements near the border, beyond Idlib, as at least 100 more civilians lost their lives over the last two weeks.

Many civilians from Idlib and Aleppo have been forced to live in open spaces or under trees and freezing winter conditions have made the grave humanitarian situation worse.

As a result, schools, mosques, hospitals and abandoned buildings, including prisons, have become shelters for civilians trying to survive.

At least 40 families are living in a school in Termanin which was targeted by regime airstrikes this week. Throughout the region, similar scenes can be observed as abandoned schools, classrooms host displaced families, instead of students. Some newly arriving families are even forced to build tents on the school grounds because the classrooms are full.

The U.N. estimates that nearly 900,000 people have fled their homes or shelters in northwest Syria in the latest upsurge in violence, the biggest wave of displaced civilians in the nine-year conflict. Almost 80% of the displaced people are women and children.

The north of Idlib is a dead-end for hundreds of thousands of civilians, displaced from other former opposition strongholds across Syria. It has been described by aid groups as the world's largest de facto open-air displacement camp. Hundreds of people, many of them children, have been killed in recent weeks as pro-regime bombardment spares nothing, from homes to hospitals.

Tens of thousands of them are left to sleep rough in the thick of winter, with temperatures dipping to minus 7 degrees Celsius in some areas last week.

More than half of the displaced are children and at least seven of them have died from the cold and bad living conditions.

According to the U.K.-based Syrian Observatory for Human Rights, the regime offensive has killed more than 400 civilians since it began in December, adding to the toll of more than 380,000 who have died in the years of unrest.

The head of the World Health Organization (WHO) said Tuesday that out of nearly 550 health facilities in northwest Syria, only about half were currently operational.

Syrian regime troops have reconquered swathes of Idlib and retaken the key M5 highway connecting the country's four largest cities as well as the entire surroundings of Aleppo city for the first time since 2012.