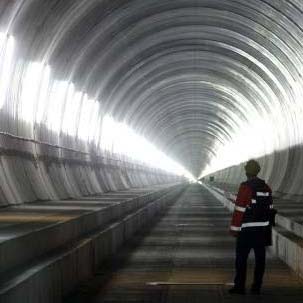 Workers hugged, cheered and set off fireworks as the huge drill broke through the last stretch of rock deep in the Swiss Alps. There was delight at the end of the tunnel - the world's longest - when it was completed Friday.

SEDRUN, Switzerland (AP) -- The $10 billion, 35.4-mile (57-kilometer) tube will connect Europe's high-speed rail network and is part of a larger effort to cut in half the number of trucks - now at 1.2 million - that thunder through the Alps each year.

The joy and pride felt throughout Switzerland over digging the Gotthard Base Tunnel reflected the one cause that unites the country's wealthy city dwellers with those living in traditional villages: Protecting the beauty of the mountains.

"Together we risked a lot," said Swiss Transport Minister Moritz Leuenberger. "Together we achieved a lot."

TV stations across Europe showed the event live. The embraces and cheers by the hard-hatted workers brought to mind the successful rescue of 33 trapped miners earlier this week in Chile.

Swiss voters approved the tunnel's construction in a series of referendums almost 20 years ago. Despite some criticism at the cost - almost $1,300 for every citizen - the proposal passed by a wide margin.

Leuenberger, who is also in charge of environment issues, praised Swiss voters and took a swipe at neighboring Germany, where popular opposition threatens to halt the construction of new high-speed rail links and underground train stations.

"Today proves how sustainable, strong and efficient our direct democracy is," he told miners, VIPs and reporters amid the raucous underground celebrations.

His words were echoed by one of the 2,500 workers who toiled for more than a decade. Dieter Meyer, an electrician from Germany, expressed his awe that Switzerland - a country of just under 8 million people - had chosen to pursue such an ambitious project.

Meyer said Germans should reconsider their opposition to new rail projects if they are serious about protecting the environment and halting climate change.

"This tunnel is the future," he told The Associated Press. "In Germany, the people in Stuttgart should really think about whether they want to protest against the new project."

Protesters in the southwest German city oppose plans to move Stuttgart's station underground, viewing the euro4.1 billion ($5.7 billion) project as a waste of money. Supporters say it will free up the city's packed center and help shorten journeys across Europe.

Peter Fueglistaler, director of the Swiss Federal Office of Transport, insisted Friday that "our neighbors in Germany and Italywill have to fulfill their promise and provide high-speed rail links" that are meant to link the Dutch port of Rotterdam to its Mediterranean counterpartGenoa in Italy.

Already Switzerland transports some 62 percent of freight by rail - far more than any of its neighbors.

Mindful that heavy goods traffic has contributed to the steady erosion harming fragile Alpine plants and animals - as well as cherished scenery - Switzerland has been tunneling through the Alps for decades.

The Gotthard Base Tunnel - first conceived in 1947 by engineer Eduard Gruner - beats Japan's Seikan Tunnel, which is33.5 miles(53.9 kilometers).

Other tunnels, including the recently completed 21.5-mile (35.6-kilometer) Loetschberg Base Tunnel, complete an underground network that few other countries can rival.

"I hope that this tunnel will have lots of brothers in the >Alps," Leuenberger said. His European colleagues, watching the ceremony live at a meeting in Luxembourg, will have recognized the reference to other projects in France, Italy and Austria still many years from completion.

Switzerland's dependence on its neighbors to play their part in the plan for a cross-European high-speed rail network was mirrored Friday in the many different flags waved by workers in the newly carved hole under the mountains.

First among them was foreman Hubert Baer, an Austrian.

"This is the most wonderful moment in my 36 years of tunnel building," Baer said, surrounded by Italian, Portuguese and Turkish workers.

Many paid tribute to the eight men who died working in the tunnel over the years. Some also took time to congratulate their colleagues on the other side of the world in Chile, who rescued 33 men from a collapsed mine earlier this week.

"That was fantastic for us, too," said Juergen Sandtner, another Austrian. "It was huge. That they managed to get them all out alive again was a great achievement."