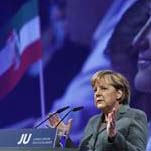 Chancellor Angela Merkel's declaration that Germany's attempts to build a multicultural society had "utterly failed" is feeding a growing debate over how to deal with the millions of foreigners who call the country home.

BERLIN (AP) — Merkel told a meeting of young members of her conservative Christian Democratic Union that while immigrants are welcome in Germany, they must learn the language and accept the country's cultural norms — sounding a note heard increasingly across Europe as it battles an economic slump and worries about homegrown terrorism.

"This multicultural approach, saying that we simply live side by side and live happily with each other has failed. Utterly failed," Merkel said.

Merkel's comments were met with applause by the more conservative members of her party, but some Germans in cosmopolitan Berlin argued Sunday she was out of touch with the country's daily life.

"I think her statement is very black and white and does not reflect honestly the lifestyle people are living here," said Daniela Jonas, a German setting up a flea market in the city's diverse Kreuzberg district, where immigrants and native-born Germans live among each other.

Germany and other European countries have grappled with the idea of themselves as immigration nations and Merkel has long been skeptical of the country's attempts to build a multicultural society that includes its estimated 5 million Muslims.

Many immigrants speak little or no German, work in low paying jobs or live off of government handouts at the same time the country faces an aging population and a shortage of highly skilled workers.

Merkel acknowledged in her Saturday comments that then-West Germany in the 1960s opened its doors to Turkish laborers who helped the nation rebuild from the ruins of World War II. Yet German politicians believed those laborers would eventually return home. Instead, many have stayed and their children's children are now starting families here.

A European Championship football qualifier between Germany and Turkey last week reflected built-up tensions. Star Germany player Mesut Oezil, who is of Turkish heritage, was whistled and booed throughout the game by Turkey fans — who outnumbered German supporters in Berlin's Olympic stadium.

The 22-year-old Oezil has become Merkel's poster child for successful integration, and Turkish President Abdullah Gul said in an interview Saturday that he supported Oezil's decision to play for Germany instead of his parents' native Turkey.

Gul also called on Turks living in Germany to learn to speak German "fluently and without an accent," but insisted it was up to German politicians to create the opportunities for its Turkish citizens to learn the language and integrate into society.

"That must begin in kindergarten," Gul told the Sueddeutsche Zeitung. "I have told Mrs. Merkel that."

Last week, several German universities launched departments to train imams who would be able to lead prayers in German as well as Turkish. Most imams in Germany are sent from Turkey and speak no German.

Some argued Sunday that Merkel's comment makes them feel less welcome, and do nothing to encourage integration.

"It's a shame," said a man who gave his name only as Hakim, an immigrant from Morocco. "It is not good for the atmosphere in Germany and it is not a helpful comment."