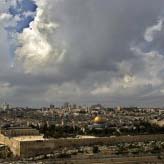 Israel on Monday praised a decision by the Organisation for Economic Cooperation and Development (OECD) to hold a tourism conference in Jerusalem this week despite Palestinian calls for a boycott.

AFP - The Palestinians fear the conference could lend international recognition to Israel's claim to the entire city and undermine their demand that annexed Arab east Jerusalem be the capital of their future state.

Israeli Tourism Minister Stas Misezhnikov told reporters in Jerusalem he was unaware of any countries boycotting the meeting, and backed away from previous statements regarding Jerusalem's sensitive status.

"I never said that this summit is to recognise Jerusalem as Israel's capital, but the decision to hold it in Israel shows that the OECD sees Israel as an important country economically and for tourism," he said.

"This important meeting of tourism officials from all over the world should remain apolitical and strictly professional," he added.

The minister from the ultra-nationalist Yisrael Beitenu party said 28 delegations had confirmed their participation at the conference.

Saeb Erakat, the chief Palestinian negotiator in stalled peace talks with Israel, meanwhile called on the international community to boycott the gathering.

"By hosting the OECD conference in Jerusalem, Israel seeks de facto recognition of its illegal annexation of east Jerusalem," he said in a statement.

He called on all those invited "to cancel their participation and to publicly repudiate illegal Israeli actions."

The Arab League made similar calls for a boycott last week, saying it viewed the decision to hold the meeting in Jerusalem with "extreme concern."

An official in the Turkish tourism ministry said no one would be attending and declined to give any further details. Misezhnikov said he was in contact with his Turkish counterpart regarding the meeting.

Once-close ties between Israel and Turkey have been severely strained since a botched May 31 raid on a Gaza-bound aid flotilla in which Israeli commandos shot dead nine Turkish activists.

The three-day forum set to open on Wednesday has already caused a row between the OECD and Israel, which joined the club of developed economies in May. The OECD now numbers 33 countries.

Misezhnikov had earlier said the choice of Jerusalem amounted to recognition of the Jewish state's claim to the city as its capital, a statement which sparked a protest from OECD Secretary General Angel Gurria.

Israel seized east Jerusalem in the 1967 Six-Day War and later annexed it in a move not recognised by the international community. It views the entire city as its "eternal, undivided" capital.

The Palestinians view east Jerusalem as the capital of their promised state, and the city's fate has been one of the thorniest issues in the peace process.