US not pressing Turkey over NATO missile shield: Gates 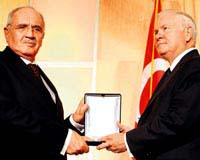 Defense Secretary Robert Gates on Monday said the United States has not pressured Turkey to take part in a NATO missile defense system, but expressed hope Ankara would endorse plans for the anti-missile shield.

WASHINGTON, Oct 18, 2010 (AFP) - Gates said US and Turkish officials have discussed the possibility of Turkey actively participating in the proposed missile defense system directed against Iran.
"The US has engaged Turkey in political and military dialogue on its potential technical and operational contributions should NATO adopt this approach," Gates said in a speech to the American-Turkish Council in Washington.
"Contrary to some press reports, we are not pressuring Turkey to make a contribution," said Gates, according to a text of the speech released by the Pentagon.
The plan is expected to be endorsed at a NATO summit on November 19-20 in Lisbon.
Gates said that "we do look to Turkey to support NATO's adoption at the Lisbon summit of a territorial missile defense capability."
Turkey faces a difficult decision on the missile shield, which will be viewed as a test of its commitment to the North Atlantic Treaty Organization.
Washington portrays the missile defense system as a safeguard against a possible ballistic missile strike from Iran, but Turkey worries that joining the shield could damage relations with its neighbor.
Ankara is also anxious to avoid angering Russia, which strongly opposes the missile defense plan.
At a NATO conference of defense and foreign ministers last week in Brussels, US and Turkish officials discussed the issue but Ankara has yet to declare its decision.
Turkish Prime Minister Recep Tayyip Erdogan also said Friday there had been no pressure on his country.
"Turkey has not come to a decision yet, there are technical problems to surmount," a Turkish diplomat told AFP on condition on anonymity, saying Ankara was trying to figure out how to limit the impact of a "yes" decision, particularly on its relations with Tehran.
Turkey opposes having the NATO missile defense plan explicitly single out certain countries such as Iran, and wants any shield to protect the whole of the country and not just areas near the Iranian border, the diplomat said.
Gates earlier this year voiced concern that Turkey might be drifting out of the West's orbit, and criticized the European Union for failing to embrace Ankara's bid to join the EU.
But on Monday, Gates made no comments about Turkey possibly shifting its foreign policy, praising the country as a vital ally.
He said the US government would continue to help Ankara in its fight against the PKK Kurdish rebels, including providing US intelligence on the "terrorist threat."
"In response to the rise in PKK terrorist attacks against Turkish military forces and civilians over the past year, the US has increased its efforts to crack down on PKK criminal enterprises, enhanced its intelligence support, and reached out to our European allies to encourage them to freeze PKK assets in Europe," he said.
Turkey's refusal to allow US troops to cross its territory to invade Iraq in 2003, to support UN sanctions against Iran, and the ferocity of its dispute with Israel over a raid on a humanitarian aid flotilla to Gaza have all raised US concerns about the direction of Turkey's foreign policy.
Last Update: Oct 19, 2010 2:20 pm
RELATED TOPICS