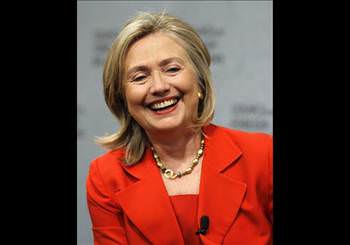 Amidst suggestions that a rift over a planned NATO missile defense system will be a new test in bilateral relations between Ankara and Washington, US Secretary of State Hillary Clinton has praised the existing partnership between the NATO allies, calling the bilateral relationship “broader and more dynamic today than ever before.”

Clinton's powerful description of her country's bilateral ties with Turkey came on the occasion of the celebration of the 87th anniversary of the proclamation of the Republic of Turkey. Clinton's written celebratory message released by the State Department on Thursday came on behalf of US President Barack Obama and the people of the United States.

"In the 87 years since Mustafa Kemal Atatürk set out a new vision for the Turkish people, Turkey has risen to become a leading economic power and an important presence on the world stage. The opportunities for Turkey to lead in the 21st century are even greater," Clinton said.

"The relationship between Turkey and the United States is broader and more dynamic today than ever before," she added, while referring to visits paid to Turkey in the spring of 2009 by herself and Obama. According to Clinton, both visits are signs of Washington's recognition of the importance of a strong partnership between the two nations, a partnership which she said is "based on mutual respect, mutual interests and mutual responsibility."

The NATO partnership regarded as a key aspect of bilateral relations found its place in the message. "As NATO allies, we also stand shoulder to shoulder to help create a safer and more secure environment for future generations, in Afghanistan and around the world," Clinton said. "We look forward to continuing to work closely with Turkey toward our shared goals and aspirations," she added.

Celebration of a republican form of government in Turkey has also served as an opportunity for warm messages from Moscow to Ankara with President Dmitry Medvedev, Prime Minister Vladimir Putin and Foreign Minister Sergey Lavrov sending separate congratulatory messages to their Turkish counterparts.

In his message to Turkish President Abdullah Gül, Medvedev cited intense high-level political dialogue, the similarity of Russia and Turkey's position on many key issues on the international and regional agenda and mutual efforts for implementing joint projects as significant aspects of the multidimensional and strategic partnership between his country and Turkey. Both Putin and Lavrov highlighted in their messages that improvement in bilateral ties between Ankara and Moscow would benefit the peoples of Eurasia, not only the Russian and Turkish peoples, since both countries aim at maintaining stability and security in the region.

Meanwhile, this year's celebration of Republic Day was to mark a first in improved ties between Ankara and the autonomous Iraqi Kurdistan region of northern Iraq, according to a news report. For the first time, Arbil, the capital of the region, was added to the list of diplomatic missions abroad where Republic Day is celebrated, the Turkish daily Hürriyet reported on Friday.

Turkey's consul general to Arbil, Aydın Selcen, who was posted to his current post in March, told the daily that he would hold a separate reception for celebrations in Arbil in addition to the celebrations at the Turkish Embassy in Baghdad.

Last October, Turkish Foreign Minister Ahmet Davutoğlu paid a landmark visit to Arbil, the first by a Turkish foreign minister. At the time, Davutoğlu, who visited Basra earlier that day for the opening of a Turkish consulate, stated in Arbil that Turkey would soon open a consulate there. The Iraqi Cabinet approved the opening of a Turkish consulate in Arbil on Jan. 26.
CIHAN
Last Update: Oct 30, 2010 11:54 am
RELATED TOPICS