Turkish premier warns of difficult times in the region 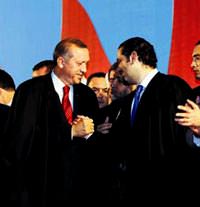 Turkish Prime Minister Recep Tayyip Erdogan on Wednesday called for unity as the Middle East is going through a difficult period.

Beirut (DPA) - In a joint press conference with his Lebanese counterpart, Saad Hariri, Erdogan said:"The Middle East is going through a critical period, that's why we have to be united."

Erdogan said he was concerned about domestic developments in Lebanon, adding that "our efforts are focused on the means to contribute to maintaining national unity justice and peace." He said Turkey would not give preference to one sect or party over another.

The Turkish premier arrived Wednesday on a two-day visit to Lebanon, amid heightened tensions over reports that the Special Tribunal for Lebanon (STL) will soon issue its indictment in the 2005 assassination of former premier Rafik Hariri.

According to media reports, at least eight members of the Lebanese Shiite group, Hezbollah, are likely to be indicted. Hezbollah has warned of repercussions in the event of such a verdict.

Erdogan's trip comes as Turkey aims to play a bigger role as regional mediator in the Middle East.

Apart from political issues, his visit also focused on improving economic ties between the two countries.

"I am pleased to announce the signing of a free trade agreement between Lebanon and Turkey. Reaching this agreement required many rounds of negotiations," Hariri said.